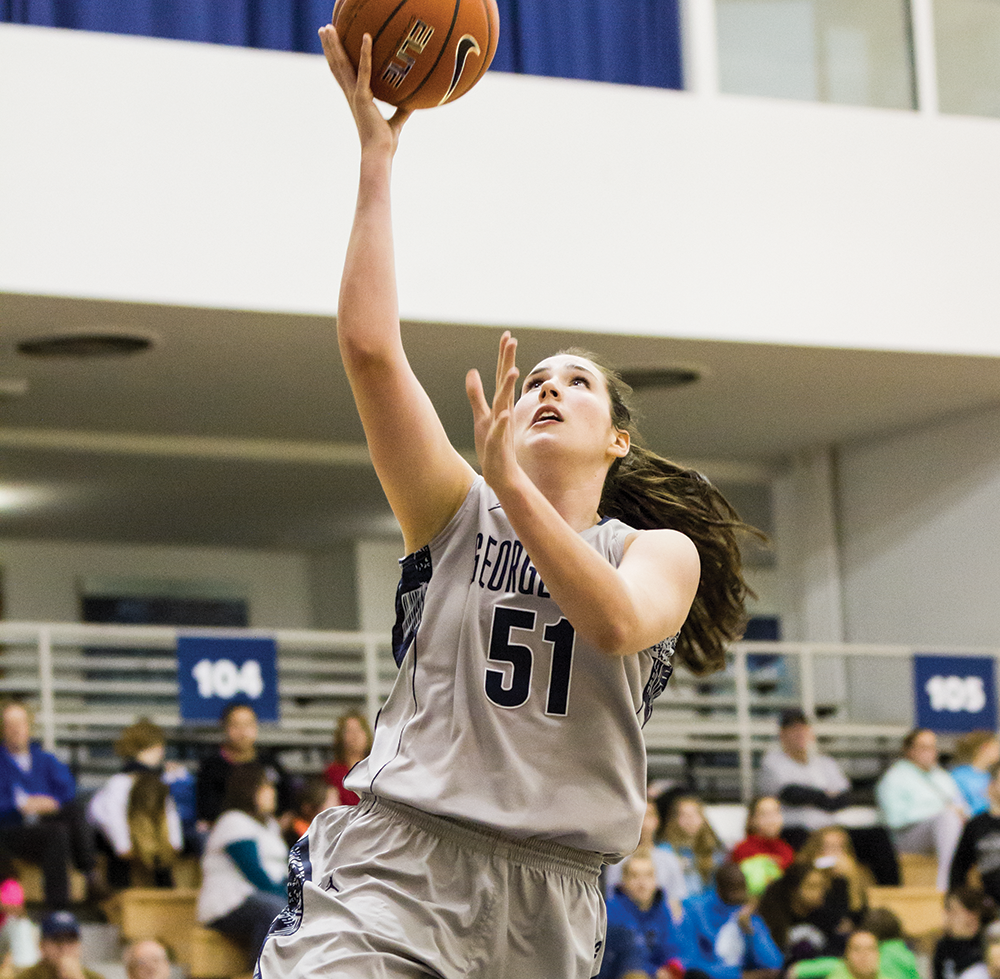 After an evenly matched opening to the game that seemed to foreshadow a competitive contest for the Georgetown women’s basketball team against George Washington (4-3) on Tuesday, the Hoyas (5-2) pulled away in the middle of the first half. The team recorded a 13-2 run en route to a 78-57 win against the Hoyas’ crosstown rival, setting the stage for a looming clash with No. 10 Penn State.
In the first minutes of the game, the Hoyas saw mixed results. The team jumped out to an early 7-0 lead, but quickly surrendered it as the Colonials tied the score at seven just over five minutes into the half. The teams proceeded to exchange baskets for the next several minutes, during which the Blue and Gray could not extend their lead past two. With the score tied at 15, the Hoyas seized control, taking advantage of a series of turnovers and defensive stops to go on a 13-2 run. That lead did not shrink below nine points for the remainder of the game.
“Initially … it was back and forth, feeling each other out,” Head Coach Jim Lewis said. “George Washington is a good team; you’re not going to shut them out and run up a 25-0 score to start the game.”
As the first half progressed, the Hoyas’ effort to hold GW to perimeter shots began to pay off. The Colonials struggled to hit their shots, finishing the half shooting only 29.4 percent from the floor.
“We went in the game with a specific game plan to try to minimize the penetration by [grad student Colonial guard] Danni Jackson because she’s a tremendous playmaker and assist person,” Lewis said. “She had a tough night from the field, 0-11. We wanted to make her a jump shooter, make her a contested jump shooter, and I thought we did a great job on her.”
The Georgetown defense had clear effects on GW’s offensive abilities. The Colonials hit only 4-of- 20 three-point attempts and were limited to 28 points in the paint.
At the same time, the Georgetown offense – led by double-digit point totals from each member of the starting five – put together an excellent performance. Senior forward and co-captain Andrea White finished with 15 points and led the team with 13 rebounds.
“I knew our team would come out and play hard, and everyone played hard so we got a big win,” White said. “I was very impressed. … Everyone was just great tonight; our team is really coming together.”
Georgetown scored 44 of its points in the paint, many of them by freshman center Natalie Butler, who led the team with 17 points while shooting 8-for-12 from the field. The team, however, continued to struggle with turnovers. The Hoyas finished with 18 turnovers on the night, leading to 23 points for the Colonials.
“We have struggled with turnovers.” Lewis said. “We gave [the team] a goal to keep our turnovers under 15. We had 18, which was the lowest number of turnovers we’ve had. We matched it one time in another game, but obviously we’ve been in the 20s, which is totally unacceptable.”
The game was also marked by the number of minutes played by the Georgetown starters, all of whom played more than 30, but Lewis believes this is just a part of the development of his team.
“We have to continue to grow these young players. We have two freshmen coming off the bench, Jade Martin and Tyshell King, and we have a sophomore in Dominique Vitalis; all three of them are very capable,” Lewis said. “And really it’s me; it’s not that I don’t have confidence in them. I’m still learning about our team.”
The Hoyas now turn their attention to one of the nation’s best teams, No. 10 Penn State (5-2). The Lady Lions suffered their only losses to No. 1 Connecticut and No. 4 Notre Dame. The two teams met last year in a game won by Penn State 97-74.
“Everyone is excited for Penn State,” White said. “We lost to them last year, so we really want to get this one Sunday.”
The Hoyas will have to contend with star senior forward Maggie Lucas as the centerpiece of a talented squad looking for redemption after Thursday’s loss to Notre Dame.
“Maggie Lucas is one of the top perimeter shooters in the country,” Lewis said. “So she’s another tremendous challenge that we have in front of us.”
Georgetown will play host to Penn State in McDonough Arena this Sunday. Tip-off is scheduled for 2 p.m.