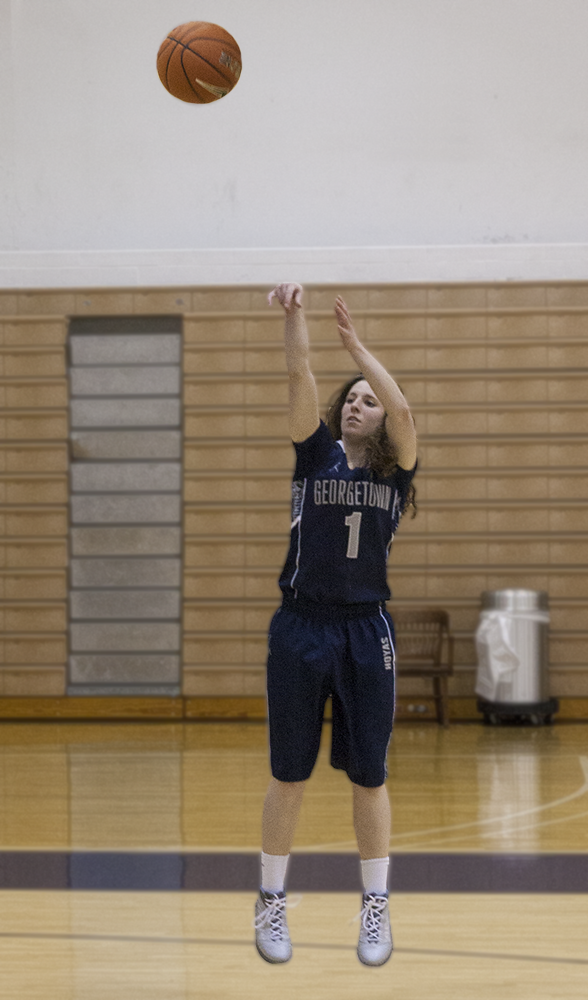 After tumultuous turnover in recent months, including an entirely new coaching staff and the return of only two of the team’s five starters, junior guard and co-captain Katie McCormick is a familiar face who will lead a young Hoyas team into the new season.

The 5-foot-9-inch upperclassman scored 8.5 points per game last season, making her the team’s second-leading returning scorer behind sophomore forward Faith Woodard. McCormick also led the team with 45 three-pointers, making her one of the Hoyas’ most dangerous outside threats.

Despite her on-court prowess, McCormick’s most important role on this year’s team may not have anything to do with her outside shooting or all-around ability. As a junior with two years of experience on the Hilltop, she is a crucial veteran presence for a team with no seniors and five freshmen.

The Hoyas’ freshman class, which consists of guards DiDi Burton, Chenya Sealey, Justyce Swango and Dorothy Adomako and center Yazmine Belk, has looked to veterans like McCormick for leadership. The class has already shown considerable promise, as Adair made the unusual choice to name Swango as a co-captain alongside McCormick and sophomore guard Tyshell King. Adomako was named the Big East Preseason Freshman of the Year, and Belk, Burton and Sealey were all highly successful high school players and highly regarded recruits. Belk praised McCormick’s ability as a leader as the team prepares for the beginning of the season.

McCormick, who has played for three different coaches during her three years at Georgetown, has embraced her role as one of the team’s primary leaders.

“We’re young, so it’s a little harder, but I would say that our freshmen came in and made it a little easier on us in the junior class,” McCormick said. “There’s a little bit of a difference [between juniors and seniors], but we’re still upperclassmen, we know how to handle things, and so my junior class and the team in general have all come together and helped each other.”

In past years, the Leonardtown, Md. product has had problems with injuries. During her freshman season, she missed the team’s first 11 games due to a knee injury, and missed the team’s final seven games after sustaining another knee injury. In her sophomore campaign, McCormick missed four games due to more minor knee issues. Although she was mostly healthy for last season, knee problems have plagued McCormick through much of her collegiate career. However, this year she feels healthy and ready for the upcoming season as opening night approaches.

“This is the first year that I’ve felt really good. The knee feels good, and I don’t have any other injuries, so hopefully it will stay like that,” McCormick said.

McCormick praised the Hoyas’ exceptional medical team and credited them for assisting her with her rehabilitation from her various knee injuries.

“The trainers are everything. Shannon [Hubbard], our trainer — to me, she’s the best trainer that’s come through here, and going through two ACL rehabs, she’s done her job. She’s great,” McCormick said.

On paper, the Hoyas are not a threat to challenge for the Big East title this season. Last year, the team struggled through a disappointing season, finishing 11-21 and 4-14 in Big East play, before losing three stars to graduation and transfer. As a result, the Hoyas were picked to finish eighth in the 10-team conference in the Big East Preseason Coaches Poll.

Still, led by Adair, who spreads an infectious amount of positive energy to everyone around her, the Hoyas are optimistic that they will be able to have a highly successful season. With seven players on the roster who are 6 feet 1 inch or taller, the team will play an aggressive style of defense that could cause problems for opponents.

McCormick, projected to slot in as the team’s starting shooting guard, will look to provide solid all-around play. She spent her summer working to become a more complete offensive player, and focused on improving her pull-up jump shot, floater and ability to attack the rim. McCormick hopes that her individual improvements, combined with the hard work of her teammates and the infusion of new talent, will lead to a great season, with a possible postseason run.

“I don’t think there is a ceiling. If we play the way that I know we can, the way we’ve played certain days in practice, we can go as far as we want to go. The postseason is up to us,” McCormick said.