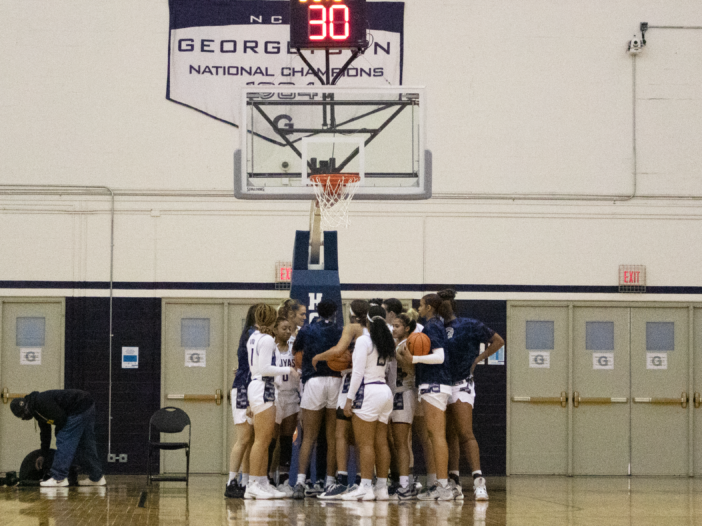 Taking the court Sunday, Jan. 16, Georgetown had only just restarted their play two days prior with a loss against Marquette after a month of disruption and uncertainty caused by COVID-19. For most of December, the Hoyas were forced to reschedule their Big East games and halt all practices after its Dec. 13 win over Coppin State.

According to the broadcasters, Head Coach James Howard recognized the difficulty of resuming play after such a long hiatus, commenting before the game that this stretch felt like a new season for the team. He remained optimistic, though, adding that he hoped their chemistry would keep them competitive against the talented Blue Demons.

However, Georgetown’s loss of practice time and lack of team cohesion quickly became apparent as the game took off. DePaul, which has the highest scoring average in the country at 90 points per game, quickly scored eight points and forced the Hoyas to call a timeout only two-and-a-half minutes into the game. Although Georgetown entered the game with intensity and maintained its scrappy energy, it fell to the tough pressure of the Blue Demons’ full-court press and committed turnovers that DePaul easily converted into made shots.

The Hoyas finally earned their first points off of a layup from junior forward Graceann Bennett almost halfway through the quarter and started to gain momentum from there. They cut the Blue Demons’ lead to single digits after a 3-pointer from graduate guard Milan Bolden-Morris. However, DePaul answered with a 10-0 run, almost doubling Georgetown’s points by the end of the first period to pull ahead 30-16.

Entering the second quarter, the Blue Demons kept up their intense defensive pressure, again forcing the Hoyas to play a fast-paced game. DePaul was able to build its lead to 21 points with the help of impressive 3-point shooting. However, Georgetown kept battling defensively, holding DePaul scoreless for three minutes during the half. On the other side of the ball, the Hoyas responded with two 3-pointers from Bolden-Morris late in the quarter. Still, DePaul maintained a decisive gap, ending the half 51-32.

The third quarter was no different from the first two as DePaul burst out of the tunnel with hustle and shooting accuracy, going on another quick 8-0 run. Sophomore guard Kelsey Ransom helped the Hoyas respond with an offensive push, making several powerful scoring drives to the basket to slowly crack at the Blue Demon lead. Her efforts were thwarted in the face of the seemingly unstoppable opponent, and DePaul continued to force the ball away from Georgetown to eventually end the quarter with a comfortable 85-51 lead.

Although the fourth quarter hardly got better for the Hoyas, sophomore guard Yasmin Ott opened it up with a quick 3-pointer, bringing the team to three scorers putting up double digits, a notable improvement from its loss to Marquette in which the highest Georgetown scorer had a mere six points. In the final minute of the game, DePaul hit a 3-pointer to break the 100-point barrier, and the game ended with the Hoyas losing 102-69.

Despite the tough loss, Georgetown showed impressive resilience in the face of unforeseen obstacles. Bolden-Morris ended the game with 17 points, and Ransom and Ott each added 13 and 11 points respectively. In addition, first-year forward Kaliyah Myricks, who marked just her fourth appearance this season with this game, grabbed seven rebounds to help her team out-rebound the Blue Demons 40-39 in the game.

Looking ahead, Georgetown will return to McDonough Arena to play its first home game in over a month on Friday, Jan. 21 at 7:00 p.m. against the tough Creighton Bluejays (13-4, 8-1 Big East). Per the university’s COVID-19 regulations, the game cannot be played with any fans in attendance, adding to the abnormality of this season for the Hoyas.