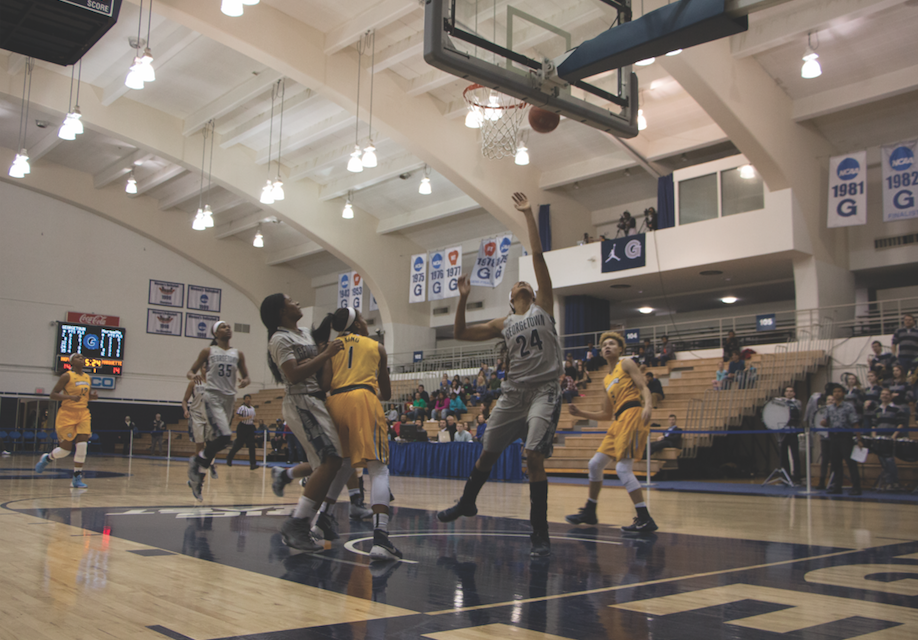 After finishing with a 4-27 record in her first year at the reins of the program, Georgetown Head Coach Natasha Adair has successfully turned this program around as the Hoyas earned their second consecutive National Invitational Tournament bid and host the Fordham Rams at McDonough Arena on Friday night.

“It’s a group effort, you don’t turn it around by yourself” Adair said. “It starts with our administration and their support. Our AD from day one talks about the process and he’s been with us every step of the way and just being supportive. But I think you look at the kids and their buy in.”

The sixth-seeded Hoyas (17-12, 9-9 Big East) enter the tournament after suffering an 80-66 loss to the eventual Big East Champions Marquette Golden Eagles (25-7, 13-5 Big East) in the first round of the Big East Tournament on March 5. While the tournament did not end on a high note for Georgetown, Adair looks forward to the team’s next opportunity, citing the 12-day period between games as an advantage.

“You’re disappointed with the way it ended against Marquette, but now we came back refreshed. It has been a great week of practice. The energy in practice has been phenomenal because now we talk about it being a new season. That season is over, but we have another opportunity,” Adair said.

Fordham (21-11, 11-5 Atlantic 10) returns to the NIT after missing out on all postseason tournaments during the 2015-16 season. Junior forward G’mrice Davis anchors the Rams’ offensive and defensive efforts, averaging a double-double this season with a team-high 14.4 points and 12.6 rebounds per game. Adair highly praised Davis, citing her work ethic as her biggest strength.

“She is relentless, and that’s the word I used when I described her to the team. She’s relentless on the boards. She gets extra possessions for her team and for herself by just not accepting it. She’s not going to accept the box out. She’s going to run a loose ball down. So we just have to really limit her,” Adair said.

Supporting Davis is senior guard/forward Danielle Burns whose 9.2 points per game ranks her second on the team. As a team, Fordham commits 13.7 turnovers a game, a statistic that an aggressive Georgetown defense — ranked first in the Big East with 9.7 steals per game — can use to its advantage. Adair stressed the importance of utilizing Georgetown’s defense to create offensive chances.

“We want to be disruptive,” Adair said. “We are a team that can get after it defensively. Our defense creates our up-tempo transitions, so I just want us to play with maximum effort and energy.”

The backcourt trio of junior guards DiDi Burton and Dorothy Adomako along with sophomore guard Dionna White continues to control the Hoyas’ offense. White leads the team with 15.2 points per game and Burton dishes out a team-high 3.5 assists per game. Adomako is one of three Hoyas to average at least 14 points per game, scoring 14.7 a game.

In the frontcourt, senior forward Faith Woodard remains Georgetown’s strongest force, grabbing 7.8 rebounds per game to go along with her 14.6 points per game. Adair spoke to the possibility of this being Woodard’s final game in a Georgetown uniform due to her status as being one of the three seniors on the team.

“For our seniors, to have another opportunity to have in front of your family, in front of your fans, what message are we going to send them. This is kind of new energy, new life, new season,” Adair said. “Our seniors have put us on their back in a lot of areas this year and I just want it for them.”

In terms of points of emphasis for her team, Adair noted the importance of making extra effort plays in the postseason.

“You watch all the games now, it’s who’s running out of bounds to get that 50-50 ball. Who makes that free throw in crunch time. Who gets that one defensive stop. It’s the best time of year for me. It’s March Madness for a reason and we want to leave everything on the floor,” Adair said.

Tipoff against Fordham is scheduled for 7 p.m. Friday night at McDonough Arena.