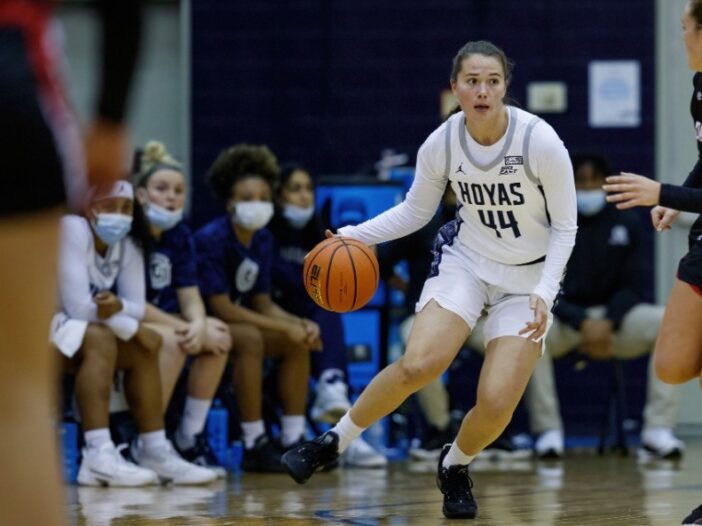 Down by 8 to the Providence Friars at halftime, the Georgetown Hoyas looked exhausted. Then, in the second half, the Hoyas resurged, battling back into the game until the Hoyas’ graduate guard Kaylin West banked in a 3-pointer to send the game to overtime.

In their previous matchup earlier this season, the Hoyas stole a road win from Providence. However, since then, Georgetown missed a month of play due to COVID-19 complications, and the Friars added key players Mary Baskerville and Kylee Sheppard.

The contest opened up evenly matched, as sophomore guard Kelsey Ransom scored quickly to put the Hoyas on the board. Still, each Georgetown effort was answered by a Providence recovery.

Though the Hoyas made a spirited push at the start of the second period, they shot only 18.75% from the field over these 10 minutes. Ransom and West showed sparks of energy on defense, taking charges and getting deflections, but Providence expanded its lead to 10 points and led 30-22 at the half.

Once the second half began, Ransom took over offensively for the Hoyas and created powerful back-to-back drives with beautiful left-hand finishes, bringing the score to 36-29. Her tenacity helped Georgetown scrape through the quarter, and a free throw from graduate forward Anita Kelava aided the Hoyas in closing the third quarter only 4 points down.

The fourth quarter showed the best competition of the game with several lead changes. The Hoyas came just 1 point behind the Friars after a 3-pointer and transition layup from Ransom, the latter of which came off of a steal and assist from Bolden-Morris. Finally, a hook shot from West pushed the Hoyas over Providence with around seven minutes left to make the score 43-42, but the game was far from over.

As Providence stole the lead again with the clock winding down, Georgetown was forced to foul. With 19 seconds left, the score was set at 51-48, and the Hoyas called a timeout to come up with one last play. The ball found its way into West’s hands with mere seconds to go, and she banked in a 3-pointer from the wing that kept Georgetown alive.

The five-minute overtime period again saw some tough action, as Bolden-Morris opened up the extra time with a 3-pointer and Ransom saw a good push to the basket to make it 58-57 Georgetown. Still, the Hoyas were unable to pull away from Providence and the Friars soon were on top again. Georgetown was forced to foul and could not regain offensive energy as the precious time ticked away, and the game ended with the Hoyas losing 66-58 to the Friars.

Although this was a tough loss for the Hoyas, who are now 1-6 in the Big East, the impressive comeback shows that they are still fighting through this season. In addition, promising figures from Ransom, who scored 21 points and had 9 rebounds, and Bolden-Morris, who followed with 16 points and 6 rebounds, highlight the consistency from the team’s top players. Turnovers, however, continue to plague this team, as the Hoyas had 26 to the Friars’ 17.