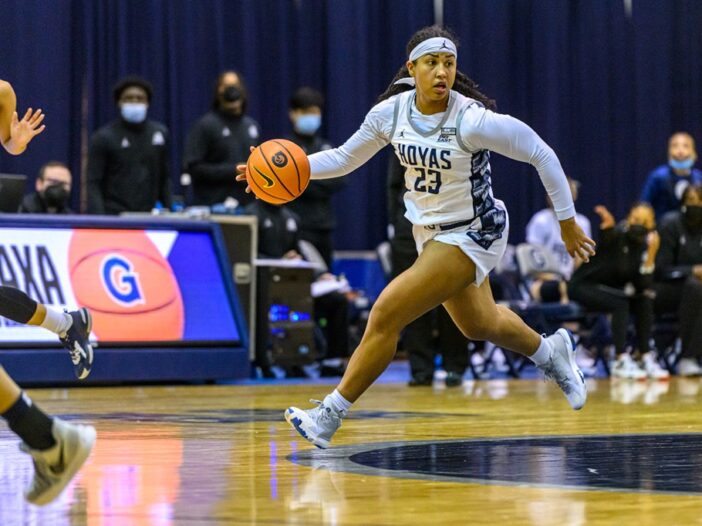 The Georgetown women’s basketball team fell 62-91 to the Seton Hall Pirates on Feb. 2 at Walsh Gymnasium in South Orange, N.J.

Coming off a 16-point win against the Butler Bulldogs on Sunday, the Hoyas (7-11, 2-8 Big East) came out strong against Seton Hall (9-10, 4-7 Big East). Junior forward Graceann Bennett immediately made her presence felt with strong drives to the basket, scoring the first bucket of the contest.

Transition offense quickly became central to the Hoyas’ gameplay. Five minutes into the first quarter, sophomore guard Kelsey Ransom lunged to intercept a critical pass and darted down the court with the ball. Ransom shrewdly dished the ball to first-year forward Brianna Scott, who drained a 3-pointer from the top of the key.

The Hoyas continued to hustle back on defense and patiently select high-quality shots on offense. Coming off an inbound, graduate guard Mary Clougherty brilliantly weaved through the Seton Hall defense for a layup, showing tactical diversity from her normal style as a catch-and-shoot player.

Seton Hall had its own high-octane offense, much to Georgetown’s chagrin. The Pirates’ guard-forward Andra Espinoza-Hunter seemed incapable of missing. In the first quarter, she sank all five of her shot attempts from the field, three of which were 3-pointers. The quarter came to a close with Georgetown trailing 17-23.

The Pirates started off the second quarter red-hot, draining three 3-point shots right off the bat. But Clougherty did not give up, responding with 5 straight points and appearing everywhere on defense. Georgetown struggled to cash in with its additional attempts despite crisp passes, hustle and stamina. Seton Hall scored 30 points in the second quarter, owed in large part to an impressive stretch from guard Lauren Park-Lane. At the half, the Pirates led 53-32.

Unrelenting, the Hoyas began the third quarter angry. They capitalized on rebounds and maintained control of the ball. From nifty bounce passes to incredible steals, the Hoyas began to regain their footing in the game. Senior forward Shanniah Wright drove to the hoop for a swift layup and was fouled on her way up, completing the and-one play with 3:29 left in the third quarter. The Hoyas slowly crept back to a 17-point deficit, outscoring the Pirates 20-16 in the period.

However, Georgetown’s progress stalled in the final quarter. Defensive laps and spotty shooting led to a final score of 62-91 in favor of Seton Hall. The Pirates nailed nineteen 3-pointers, setting a Big East conference record for the most 3-pointers in a game and making it impossible for the Hoyas to catch up.

The Hoyas allowed 24 points off turnovers to the Pirates’ 10. While this was a glaring issue — and one that can be actively addressed — Georgetown also might have just played the wrong team on the wrong day.

Seton Hall simply could do no wrong on offense. They logged a season-high in points scored, field goal percentage, 3-pointers made and 3-point percentage. They also had 5 more assists than they have recorded in any other game so far this season. Their top scorers, Espinoza-Hunter and Park-Lane, are usually deadly from beyond the arc but shifted into a new gear against the Hoyas, shooting a combined 10-13 from 3-point land.

Georgetown, meanwhile, couldn’t generate an outside presence offensively. They usually shoot around 33% from 3-point range but went just 4-16 against the Pirates.

This loss marked a setback for a Georgetown team that has won only two conference games this season, especially against a team that has a win percentage below .500 on the season.

The Hoyas will look to put this loss behind them on Sunday as the team travels to Villanova, Pa. to square off against the Villanova Wildcats (13-6, 7-3 Big East) in another conference contest.