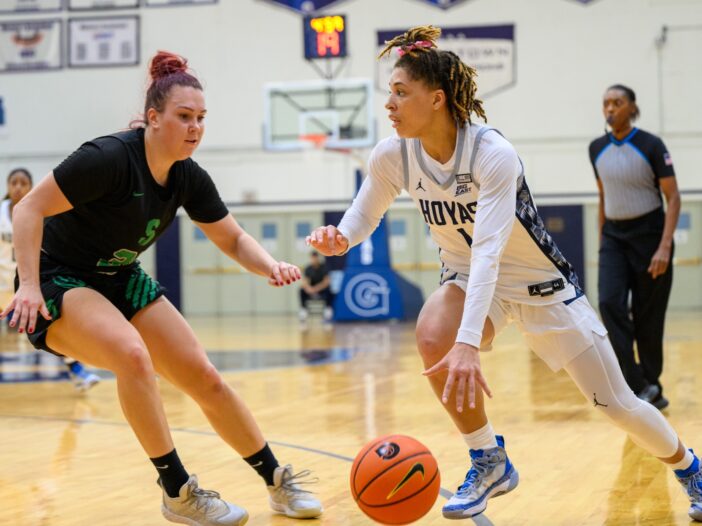 Despite being tied for ninth place out of 11 teams in the Big East Women’s Basketball Preseason Coaches’ Poll, the Georgetown University Hoyas entered the 2022-23 season looking to build on the foundations set last season.

The Hoyas are coming off a 10-19 record and first-round loss in the Big East tournament. However, they retained two of their most dependable scorers, with junior guard Kelsey Ransom, who averaged 12 points per game and ranked third in the league for steals per game, expected to lead the backcourt. Graceann Bennett, a senior forward, also adds veteran experience and scoring ability. She averaged 7.1 points and 5.4 rebounds per game last season.

Bennett said she hopes to be a model of dependability for her team.

“I am aiming for more consistency in my role because I know that as a veteran and as a post player on a team where we’re going to be looking and playing into the post, I have to be reliable so we can achieve the goals we want to,” Bennett said in an interview with The Hoya.

In addition to Ransom and Bennett, the Hoyas added more veterans via the transfer portal. Kristina Moore, a graduate guard who previously played at the University of Florida, and Jada Claude, a senior forward who spent time at both Duke University and Morehead State University, will join the rotation this season.

The first-year class of Hoyas also look to show a promising future for the team. In particular, first-year point guard Kennedy Fauntleroy, a four-star recruit with a scouts grade of 92, will likely see minutes behind Ransom in her first season.

This mix of experience and new talent has already proven to be great for team chemistry, according to Head Coach James Howard.

“We have some great freshmen that we have to work through the growing pains with, but overall we have an experienced group of players to go into the Big East conference with,” Howard said in an interview with The Hoya. “We’re excited about where we are. The stakes are high, but if we stay healthy I think we may be able to surprise some people.”

In early practices, the team — who Howard said has always been strong in defense — has focused on improving the consistency of its offense. The coaches have implemented what they deem the “power start” to each practice, according to Howard. After warming up, the team plays at the pace of a real game for 10 minutes, mimicking a live first quarter.

Howard said this energetic start to practice has helped the players improve their scoring abilities.

“We try to get them to understand a sense of urgency and moving and that has been really good because they’ve been competing,” Howard said. “If we can score at a more efficient rate like what I’ve been seeing, then teams should watch out for us.”

After struggling the past two seasons with COVID-19 breakouts and unpredictable schedules, the Hoyas are returning to a full schedule with crowds of families, students and fans allowed to fill the stands.

In the 2020-21 season, the Hoyas had a 2-15 record with 12 of their games being either canceled or postponed. In the 2021-22 season, the team had four consecutive conference games canceled, which Howard said completely disrupted the chemistry the team worked so hard to build.

A consistent schedule and excited crowds will prove essential to the team’s success this year, according to Howard.

“I think you’re gonna see a group of young women that’s playing together for the university, for everyone in the D.C. area, for the alumni and for their families,” Howard said. “I think it’s going to be an exciting time on the Hilltop.”