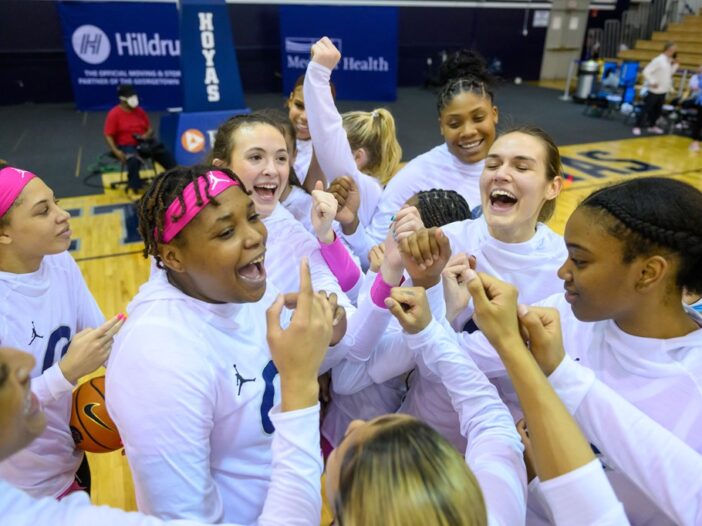 After an exciting return to in-person crowds and only a few COVID-related disruptions, Georgetown women’s basketball finished its 2021-22 season 10-19 overall and 4-15 in Big East conference play.

The Hoyas finished No. 9 out of 11 in the conference, matching the prediction made in October by the Big East Women’s Basketball Preseason Coaches’ Poll.

The team hit the ground running to start their 2021-22 season, with a record of 6-4 in their first ten games. In December, they went on a three-game winning streak as conference play began, notably beating a well-matched Providence team on the road 55-47.

However, just as the team seemed to be heating up, the omicron variant began to spread through the United States and through the team, canceling four pivotal conference games in a row.

Georgetown was unable to play games and barely able to practice from mid-December to mid-January, taking away all of the momentum and hard work that had been put into the season up to that point.

When the Hoyas were finally able to take to the court again Jan. 14, they had to reckon with not only a tough conference schedule but also getting back into shape and rebuilding their team chemistry. The struggle after this break never completely went away, as Georgetown went 1-14 in the following five weeks, only breaking its losing streak with a win against Butler at home on Jan. 30.

Still, the devastating stat sheet does not reveal the many hard-fought battles the Hoyas scraped out against their conference opponents. Three of their losses came from games that were pushed into overtime, like in the Feb. 13 game against DePaul — the offensive powerhouse and fourth-ranked team in the conference who had blown out the Hoyas a few weeks prior.

Likewise, six of the games were decided by 10 points or fewer, showing that Georgetown was competitive in these matchups despite the disappointing results.

At the end of the season, the Hoyas had a final resurgence, winning their last two regular season games against Butler and Xavier. The team carried this energy into the Big East Tournament when they traveled to Uncasville, Connecticut to upset the favored Providence Friars 68-55.

Although they lost in the quarterfinals to the dominant one-seed UConn, Georgetown closed the season on a high note, advancing in the conference tournament after a disrupted season.

After the impressive March 4 playoff win, Head Coach James Howard expressed gratitude for his team’s ability to unite under pressure in the face of unforeseen circumstances like COVID-19.

“They were really clicking and that’s what each and every coach tries to practice for. It’s so at the end of the year, we are able to be one, we have a thing we talk about, we are one,” said Howard in a press release.

Although the Hoyas did not have a statistically significant season this year, they still improved from last year. In the 2020-21 season, Georgetown finished last in the conference with a record of 2-15, struggling to find any sort of rhythm and cohesion during a shortened schedule.

The Hoyas stepped up their game this year, with returning star players like graduate student guard Milan Bolden-Morris and sophomore guard Kelsey Ransom honing their game and improving their points-per-game by at least two points.

Additionally, Georgetown strengthened its conference play to achieve four wins compared to none last season and also advanced in a competitive postseason tournament.

Looking to next season, the Hoyas will lose the valuable talents and energy of Bolden-Morris, the team’s reliable leading scorer. The team will also miss graduate guard Kaylin West, who helped run the point-guard position for a good portion of the season, as well as powerful senior forward Shanniah Wright, who was big in battling on the boards each game.

However, Georgetown will retain its star guard Ransom, the second-highest scorer on the team who should continue to come into her own and lead the team as she enters her junior season. First-year players who began to play more consistently in the second half of this season like Ariel Jenkins and Brianna Scott also show great potential for picking up the mantle and helping build up the program next season.