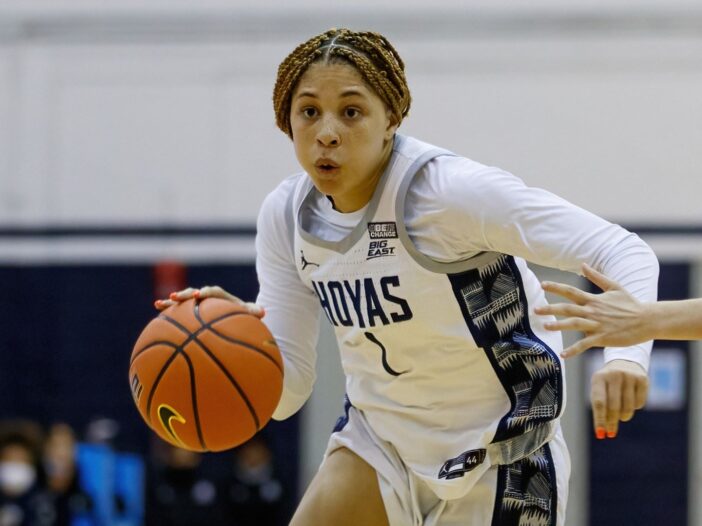 After battling through four competitive quarters and two overtime periods, the Georgetown women’s basketball team (7-15, 2-12 Big East) lost to the DePaul Blue Demons (20-17, 12-4 Big East) 105-104. Despite maintaining a lead for most of the Feb. 13 game, the Hoyas were unable to stop the Blue Demons from sneaking back into contention, forcing extra play and wrestling the win from them.

Despite coming into their fourth game in an eight-day span off of a tough 79-45 loss at St. John’s, the Hoyas entered with high energy and aggression on both sides of the court. While in the previous matchup with DePaul Georgetown fell behind early on its way to a 33-point loss, it was the Hoyas who took charge this time in McDonough Arena.

Georgetown immediately got to work in the paint with help from two first-years, forward Brianna Scott and center Ariel Jenkins. In addition, sophomore guard Kelsey Ransom found an offensive rhythm early on, pushing the team to a 22-18 lead by the end of the first quarter.

On defense, the rebounding and strength of Georgetown’s bigs allowed them to quiet the dynamic play of DePaul’s star forward Aneesah Morrow and keep her from overtaking the game.

In the second quarter, Georgetown continued to hold their composure and built a lead against the talented Blue Demon team. A 3-pointer from graduate guard Milan Bolden-Morris extended the Hoyas’ lead to 11 points midway through, making the score 37-26.

Although DePaul cut the lead to 4 points in the final minute, Hoya graduate guard Mary Clougherty made an incredible last-second play, intercepting the Blue Demons’ inbound pass and swishing a long buzzer-beating jumper to send Georgetown into the second half up 43-37.

Georgetown held steady throughout most of the third quarter, battling and winning offensive rebounds to obtain second-chance opportunities. Offensive contributions from senior forward Shanniah Wright in the paint bolstered the Hoyas back to a 10-point lead, but DePaul would not give up the fight.

Quick points from the Blue Demons brought the game much closer leading into the final quarter, with Georgetown barely leading DePaul 61-60.

In the fourth quarter, the teams battled back-and-forth, each going on impressive runs to try to turn the tide. Despite Bolden-Morris opening up the quarter with back-to-back 3-pointers, DePaul managed to go on a 10-2 run to take the lead for the first time in the game with seven minutes left.

The lead popcorned back-and-forth seven times between the teams in the next three minutes, and as the game entered the final minute, the score was tied at 83.

Although Ransom took a strong drive to the basket to put the Hoyas ahead by 2 points, the Blue Demons were able to find Morrow with seconds left to score a buzzerbeater in the paint and send the game to overtime.

The first period of overtime featured more scoreboard pingpong, with neither team able to pull away. Ransom took control for the Hoyas, shrewdly finding paths to the hoop or dishing the ball to an open teammate, which helped her team recover from 4 unanswered DePaul points to stay in the game.

Ultimately, the contest remained tied at 94 apiece in the final minute of overtime, sending the teams to another five minutes of tough competition.

Although Ransom opened up the double overtime with an impressive 3-point drive to the basket, DePaul was not deterred and pulled ahead 101-97 with two minutes to go.

Georgetown fought until the end to regain its lead, but to no avail, with the score settling at 105-101 with four seconds left. Bolden-Morris sank an incredible deep 3-pointer at the buzzer to bring the final score to 105-104, but victory had slipped through the Hoyas’ fingers.

Although suffering a hard-fought loss, the Hoyas left the court with much to be proud of. Ransom scored a career-high 29 points, and Wright and Bolden-Morris each contributed an impressive 18 points, helping the Hoyas break the 100-point barrier for the first time since 1998.

In addition, senior forward Jillian Archer recorded a double-double with 14 points and 15 rebounds, aiding the Hoyas in out-rebounding the Blue Demons 45-38. Georgetown also held DePaul to 46.8% shooting from the field while sinking 51.2% of its own shots.

Head Coach James Howard said he wished the hard work of the team had paid off in a victory, but commended the grit of the Hoyas in taking on a tough DePaul team.

“For them to come back out after St. John’s to play this way, that’s what I love about this team. People can think they’re down, they’re done, like they’ve given up, but not this team,” Howard said in a post-game interview. “They have not given up, and that showed tonight against a team that was seeing Top-25 votes.”

The Hoyas will return to McDonough to face Marquette University on Feb. 18.