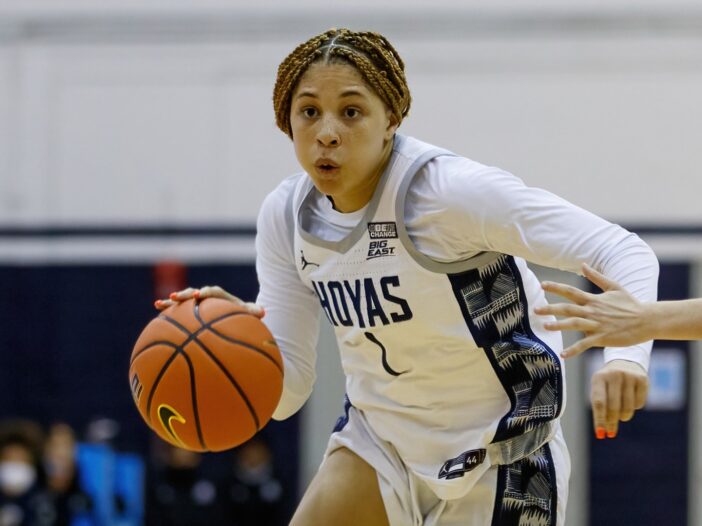 The South River, N.J. native said she is as eager as ever to hit the ground running. While this season will be Ransom’s third with the Hoyas, it should be the first without COVID-19 disruptions.

“I’ve been excited for a regular season for two years,” Ransom said in an interview with The Hoya. “Last year we got a taste, so I’m really excited for the full thing this year and for people to be able to come consistently.”

Ransom backed up her electric play with incredible statistics in her two previous seasons with the Hoyas. Last season, Ransom averaged 12 points per game, trailing only teammate Milan Bolden-Morris (GRD ’22) in scoring. She also anchored Georgetown’s defense with 2.5 steals per game, more than double that of any of her teammates.

Her dominance last year was hardly surprising. Even as a first-year, Ransom led the Hoyas in points, assists and steals en route to being named to the Big East All-Freshman Team. Ransom has been the offensive heartbeat of the team for the past two seasons; she will be expected to assert the same role this season.

This season, although the annual Big East preseason coaches’ poll ranked the Hoyas ninth out of the 11 teams in the conference, Ransom said she is determined to defy expectations.

“You see the rankings and you don’t want to identify yourself with it, especially the place we’re in,” Ransom said. “We’re trying to see it and overcome it because we have high expectations for ourselves. If that’s how people see us, then that is our chance to prove them wrong.”

Competing in one of the most competitive women’s college basketball conferences will be a tough feat, but Ransom is ready to face the challenge head-on.

“I’ve been working on trying to change up my scouting report because everyone knows me as a slasher,” Ransom said. “I’m trying to develop that second level of scoring and I think that will make me very hard to guard.”

Hailed as one of the best defenders in the Big East, Ransom’s defensive grit will be instrumental in thwarting the offensive onslaught of nationally-ranked conference opponents like the No. 6 University of Connecticut Huskies and the No. 21 Creighton University Bluejays. She will take on the challenge of matching up with some of the best guards in the conference.

“That’s something I take a lot of pride in and something that doesn’t change based on skill,” Ransom said. “It’s more based on effort. In the games where my shots might not be falling, my defense is going to be something I can rely on.”

Beyond her performance on the court, Ransom takes pride in mentoring the new recruits.

One of those younger women is first-year guard Modesti McConnell, who Ransom says needs to gain confidence.

“Of course we have a bond,” Ransom said. “Modesti is a real work in progress because she’s a firecracker underneath that little soft persona she has. I’m trying to get her to be confident in taking her shot because when she shoots, it goes in. She needs to know that when I’m on the floor with her, I trust her to take any shot and any pass I give her.”

Ransom’s leadership shines off the court, too. Alongside a few of her teammates, Ransom started an organization for women student-athletes. The group plans to collaborate with Voice in Sport, a women’s sports advocacy organization, to educate fellow student-athletes about their Title IX rights, according to Ransom.