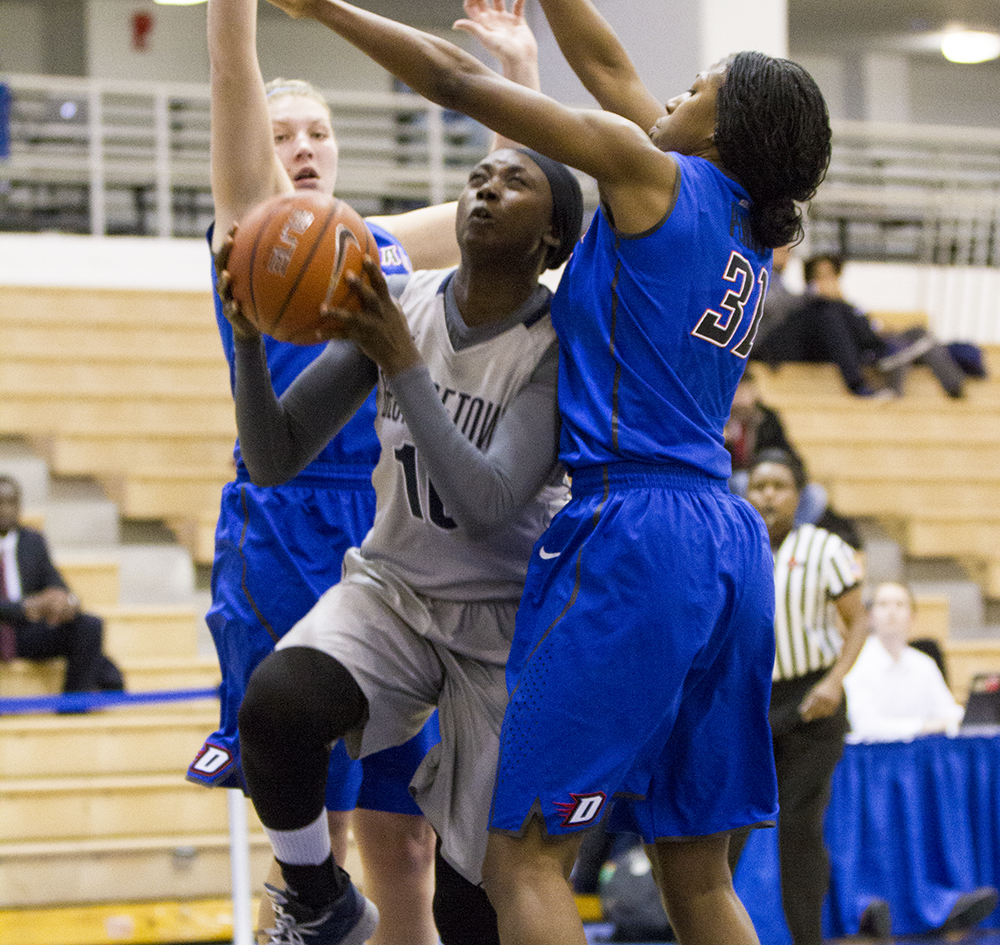 After a few tumultuous years of conference realignment, 10 schools stand in the “new” Big East that was established in 2013. Although the Catholic Seven has remained intact, the marquee basketball conference that once captivated fans of college basketball across America has ceased to exist.

The current Big East prides itself on being a basketball-first league. However, for women’s basketball especially, the loss of powerhouse teams may have delivered a drastic blow to the conference.

Many of teams that departed the Big East were ones that regularly find success in the NCAA tournament. Connecticut, one of the core teams during the creation of the original Big East Conference in 1979, left the league in 2013 for the American Athletic Conference. Connecticut is widely regarded as one of the best teams in the nation, with a whopping nine national titles under its belt.

Similarly, Notre Dame, a Catholic school like Georgetown, which has one national championship in its history and has competed in the NCAA championship game in three of the last four years, departed the Big East for the Atlantic Coast Conference after the 2012-2013 season.

The loss of those two teams, among other prominent squads like the Louisville, Rutgers and West Virginia, has visibly affected the success of women’s basketball teams in the Big East.

The Big East had consistently earned the most bids to the women’s NCAA tournament each March. In 2011, the Big East brought nine teams to the tournament, meaning that the majority of the conference was considered among the nation’s best 64 teams. In 2013, the conference sent eight to the NCAAs. With over 300 Division I programs, that is a staggering number.

However, in the 2014 tournament, the Big East only secured two bids to the national tournament, as DePaul and St. John’s scored seventh- and eighth-seeded spots, respectively. Meanwhile, Connecticut and Notre Dame had No. 1 seeds, while West Virginia and Louisville were placed in the bracket as a No. 2 and No. 3 seed, respectively.

Although the future of women’s basketball in the Big East may appear bleak, the teams involved are hopeful about the upcoming season. The teams and coaches fervently believe that the evolving nature of the conference will give the Big East and its new teams the time to hone its new identity and establish a dominance similar to what the conference once carried.

“With the coaches that we have, with the emphasis on women’s basketball you are going to see teams jump up,” Villanova Head Coach Harry Perretta told bigeast.com. “I told all of the coaches that when the old Big East started we got two teams into the NCAAs so don’t get discouraged, look forward to what we can do and not where we are now.”

In spite of the struggles that the new Big East faced last season compared to preceding seasons, teams are looking to define a new, united conference identity.

“Hopefully we will start getting that name across the country of being an athletic conference that wants to push this pace of women’s basketball and be an exciting brand to play and watch,” Marquette University Head Coach Carolyn Kieger told bigeast.com.

The Big East teams are intent on focusing on the positives of the conference realignment and how the changes bump the role of women’s basketball up in the conference food chain.

“It is great to play in a league where you don’t have 85 football guys ahead of you every day,” DePaul Head Coach DougBruno said at Big East Media Day at Madison Square Garden.

With the recent additions of Xavier University, Butler University and Creighton University to the core group of Catholic Seven teams, the Big East is eager for what is yet to come.

“The Big East has played with [its] current 10 teams for an entire season and at this point we are looking to the future, not the past,” Georgetown Director of Sports Information Barbara Barnes said in an email.

The university declined to comment further on the subject of conference realignment.

Ultimately, the reformulation of the Big East will give teams within the conference newfound opportunities to compete for the title. Between 1994 and 2013, Connecticut won the Big East title for all but four seasons. Fellow departed teams Boston College, Notre Dame, Villanova and Rutgers were the only other schools to also claim the Big East championship in that time span.

The departure of dominating teams made it possible for a team like DePaul to win the Big East title for the first time in its history in 2014. Encouragingly, its success did not stop there, as the Blue Demons went on to finish in the Sweet Sixteen of the NCAA tournament. DePaul is currently ranked 18th overall in ESPN’s preseason national rankings.

The new nature of the Big East will also give the Hoyas an opportunity to claw their way back to the NCAA Tournament, though perhaps not this season. Georgetown took its last trip to the NCAA tournament in 2012, then finished with a dismal 11-21 record in 2013-2014. According to a Big East preseason coaches poll, the Hoyas are expected to finish in eighth place in the 10-team conference this season.

While the memory of the former Big East and its greatness is all that remains, what follows in its wake offers a different kind of glory for all of the teams involved.