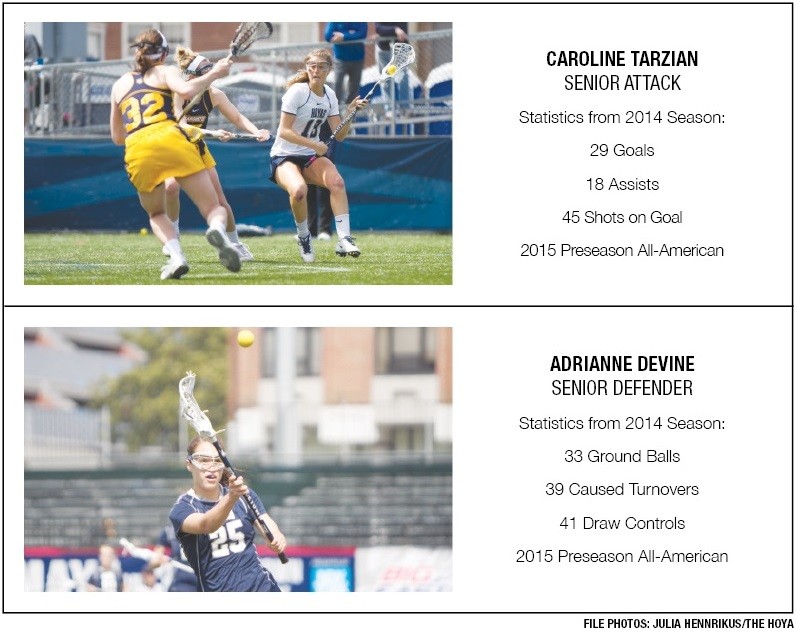 After months of preparation, the No. 17 Georgetown women’s lacrosse team’s preseason is in full swing as they prepare for the 2015 season. Last year, the Hoyas (11-9, 6-1 Big East) advanced to the second round of the NCAA tournament. This year, they are striving for more.

As Head Coach Ricky Fried enters his 11th season at the helm of the program, he brings impressive experience and a remarkable accolade to the team. Fried became the coach with the most wins in program history during the 2014 season with 117 total wins — but he still hopes to make improvements from last season.

“The biggest thing to improve on this season is consistency,” Fried said. “We had three or four one-goal losses last season, and a lot of that was due to our mistakes. We need to make sure we are focused on being consistent throughout the field, and our big emphasis statistically would be shooting percentage. We want to shoot in the 50 percent range and hold our opponents under the 50 percent range.”

The Hoyas are returning key upperclassmen talent this season; two of their captains, senior attack Caroline Tarzian and senior defender Adrianne Devine, were named Third Team Preseason All-Americans by InsideLacrosse.com in early September. Tarzian led the squad with 29 goals and 18 assists for 47 points last season and started all 20 games.

Devine was a Second Team All-Region performer for the Hoyas last season and the winner of the team’s Star Award and Bulldog Award, both of which are given to a player that gives outstanding effort and contributions to the team.

“We have a strong senior class as a whole, and captains Adrienne and Caroline have been leaders since they got here as a freshman, and we expect them to still do that,” Fried said.

The Blue and Gray have depth beyond Tarzian and Devine throughout the senior class. Georgetown will also count on the strong leadership of their co-captains, midfielder Molly Caputo and attack Sammy Giordano.

“Sammy is a consistent voice that always knows the right thing to say at the right time, and Molly is one of those people who connects on and off the field and can keep the team together,” Fried said. “We’re relying on the whole senior class, but captains in particular, to make sure to have the cohesiveness as a group to be as successful as we are able to be.”

The new freshmen are also likely to make significant contributions to the team.

Georgetown’s schedule is full of tough opponents, including No.15 Princeton on Feb. 28, No. 8 Duke on March 11, No. 16 Johns Hopkins on March 21 and No. 9 Loyola Maryland on March 25. All four squads advanced to the Sweet 16 in last season’s NCAA tournament, but the Hoyas are not intimidated.

“Our schedule every year is difficult because we want to make sure we prepare for the end of the season and the only way to do that is to play the best teams,” Fried said. “When we play at a high level, it prepares us regardless of the result.”

The Hoyas’ first scrimmage of the season will be against No. 6 Virginia on Feb. 7. The Cavaliers advanced to the semifinals last year before losing to Syracuse. Georgetown will also face defending national champion No. 1 Maryland on April 1 before beginning conference play.

In the meantime, Georgetown is perfecting its fundamental skills and fine-tuning the details.

“As of now, we’re focusing on ourselves and getting down the basics of playing as a group and our team chemistry and just the technical things, which will go into how we play against Virginia,” Devine said.

“We’ve been going through little things in practice like plays and sets that we have been working through for the past three weeks, and we’re just trying to build on that,” Tarzian said. “We’re really excited to play someone other than ourselves on Saturday.”