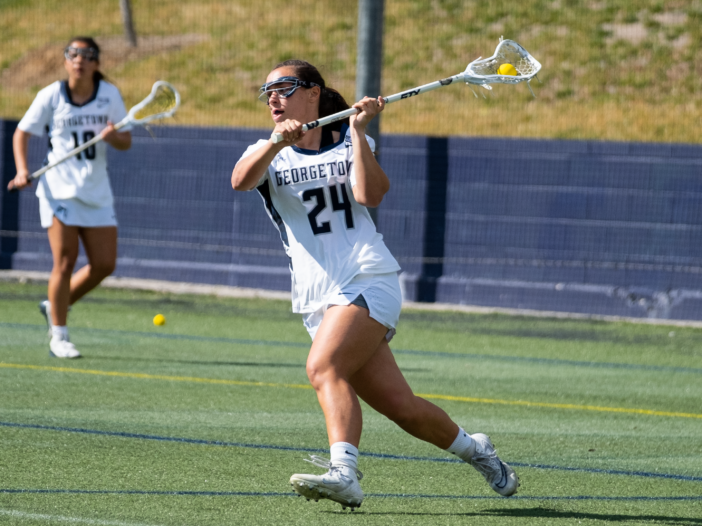 Down 5-10 on Tiger Field against Towson, the Georgetown Hoyas were on the verge of making a fourth quarter comeback. But after scoring 2 goals in under four minutes, the Hoyas couldn’t find the back of the net again and ultimately lost 7-11.

Starting from the draw control, Towson gained possession of the ball and swiftly carried it down the field. After settling the ball behind the net, the Tigers began moving the ball around the eight-meter arc.

The Hoyas responded with lockdown defense but the Tigers cut through the arc, looking for passes from the feeders down low behind the cage. Towson’s attacker Lindsay Clarke found midfielder Kerri Liucci, who escaped her defender and fired a shot past the goalie to score the first goal of the game within two minutes.

The Tigers quickly got back to work setting up another scoring possession, winning the draw again after a scrap in the midfield circle. Attacker Kerri Thornton sprinted past her defender, darted to the goal and gave the Tigers a 2-0 lead.

Just thirty seconds later, midfielder Blair Pearre put the Tigers up by 3 scores with their second unassisted goal of the game.

Despite this dismal start, Georgetown rebounded strongly. The Hoyas won the next draw control and got into opposing territory. After settling the ball, graduate midfielder Erin Bakes dodged her defender and lasered the ball into the back of the net, scoring the Hoyas’ first goal with nine minutes left in the quarter.

Trailing 2-3, Georgetown looked to tie the game before the end of the period. After a successful clear, the Hoyas traveled up the field with the ball. Sophomore attacker Kylie Hazen blew past her defender and nailed a shot into the top left corner to tie the game at 3-3, but another Towson goal made the score 3-4 at the end of the first period.

Trailing by just a goal, the energy was high for Georgetown coming into the second period. But despite their hustle and energetic defense, the Hoyas couldn’t stop Towson from slipping in back-to-back goals within the first minute of the half.

Junior goalkeeper Emily Gaven and her defense held the Tigers at bay for six minutes until Georgetown logged another goal. After receiving a clear from Gaven, first-year attacker Emma Gebhardt sprinted down the field and scored.

The Tigers, however, had 2 goals for every 1 of the Hoyas’. They scored twice before the end of the first half and went into the second period with an 8-4 lead.

Despite the break, both teams entered a drought to start the second half. Neither team could score for five minutes straight. Eventually, senior midfielder Annabelle Albert gained possession of the ball and dashed down the field. She evaded three defenders to get her shot on net, pump-faked the goalie and scored. But again, the Tigers responded with ease, scoring 2 more goals to go into the fourth quarter up 10-5.

Though the Hoyas had struggled throughout the entire game, they remained within striking range of a comeback. After Gebhardt and Albert both logged their second goals of the game to put the Hoyas within 3 scores of Towson, the momentum belonged to Georgetown.

That goal at the nine-minute mark, however, was their last. The Hoyas could not put together a sustainable offense for the rest of the game, and Towson scored 1 more goal to ice the game.

Despite the final score, this was not a poor game for the Hoyas. Their total shots and shots on goal were consistent with the rest of their performances this season. They also kept turnovers to a minimum, committing just 8 to Towson’s 18. What’s more, they took the edge on draw controls as well.

The Hoyas will have to step up their level of play on Wednesday, March 30, at 7 p.m. They will face the Maryland Terrapins (8-1), ranked 12th in the country, on Cooper Field in Georgetown’s last game before conference play.

Unfortunately, the Hoyas followed up the loss to Towson with a tough 3-15 loss to No. 12 Maryland (9-1). Next on Georgetown’s schedule is a road game against conference foe Villanova (4-7) April 2 to open Big East play.