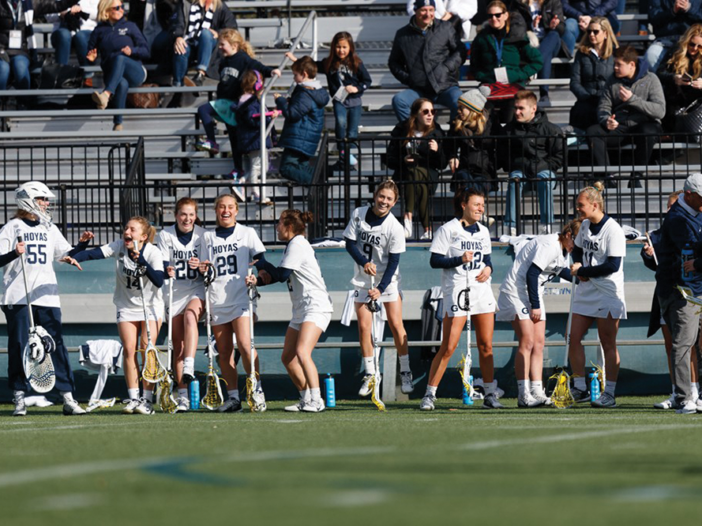 In March 2020, Georgetown’s women’s lacrosse team aimed to earn a spot in the NCAA tournament for the third straight season when the COVID-19 pandemic canceled the tournament. Now, the Hoyas are set to return to the field in the upcoming season with the same goal in mind: win enough games to secure another appearance on national collegiate lacrosse’s biggest stage.

To secure this win, Georgetown must tackle a grueling 16-game schedule against both nonconference rivals and Big East foes, including four matches against teams currently ranked in the top 11 in the 2021 IWLCA Division I Preseason Coaches Poll. After earning an at-large bid in the 2018 NCAA Division I Women’s Lacrosse Tournament and automatically qualifying by winning the Big East Women’s Lacrosse Championship in 2019, the Hoyas now know how to navigate any obstacle in their path.

This season’s course, however, will be the trickiest yet due to the unknown lasting impacts of the COVID-19 pandemic that leaves the possibility of canceled games that could throw off the team’s rhythm or players benched if they are infected with the virus.

To maintain player safety amid the pandemic, the Big East announced a modified schedule that pits Georgetown against each of its intraconference rivals twice in the same weekend, with each pair of games being played in the same stadium to minimize travel and ensure limited interaction among players and coaches.

Although the Hoyas only have five conference opponents, the Big East intentionally built in two extra weekends to leave room for scheduling issues and coronavirus-related cancellations. Thus, Georgetown has a seven-week window in which they will play their conference lineup, competing in a Friday and a Sunday game each weekend.

Before conference play, the Hoyas are set to face a slate of East Coast competitors. The Hoyas will kick off their season with Syracuse at Cooper Field on Feb. 23, facing a strong Orange team ranked third in the country in the 2021 IWLCA Preseason Coaches Poll. Georgetown will then play Drexel at home and Delaware on the road before traveling to Baltimore to play the fourth-ranked Loyola Maryland Greyhounds. The Hoyas will conclude nonconference play against Towson at home March 13.

The Big East Preseason Coaches Poll predicts the Hoyas will finish second in the tournament, considering their championship title in the 2019 season. To live up to these expectations, they will have to find success against Villanova at Cooper Field on March 19 and 21. The Hoyas will then play two games against eleventh-ranked Denver — a challenging feat, especially on the road. Georgetown will then return home to play Marquette and Butler in successive weeks before closing out the season in Connecticut against UConn on April 23 and 25.

Cooper Field will then host the Big East tournament May 6 and 8, where the top four teams in Big East play will face off to earn an automatic berth in the long-awaited 2021 NCAA Division I Women’s Lacrosse Tournament.
Graduate defender Katie Hudson, graduate attacker Michaela Bruno, graduate midfielder Natalia Lynch and senior defender Mollie Miller were the four Hoyas selected to the Preseason All-BIG EAST Team. Georgetown retained the core of last year’s team with several seniors and additional players returning. With strong gameplay and teamwork, the Hoyas have their eyes set on booking a third consecutive appearance in the NCAA tournament and will hope to have the opportunity to compete for the coveted national championship.