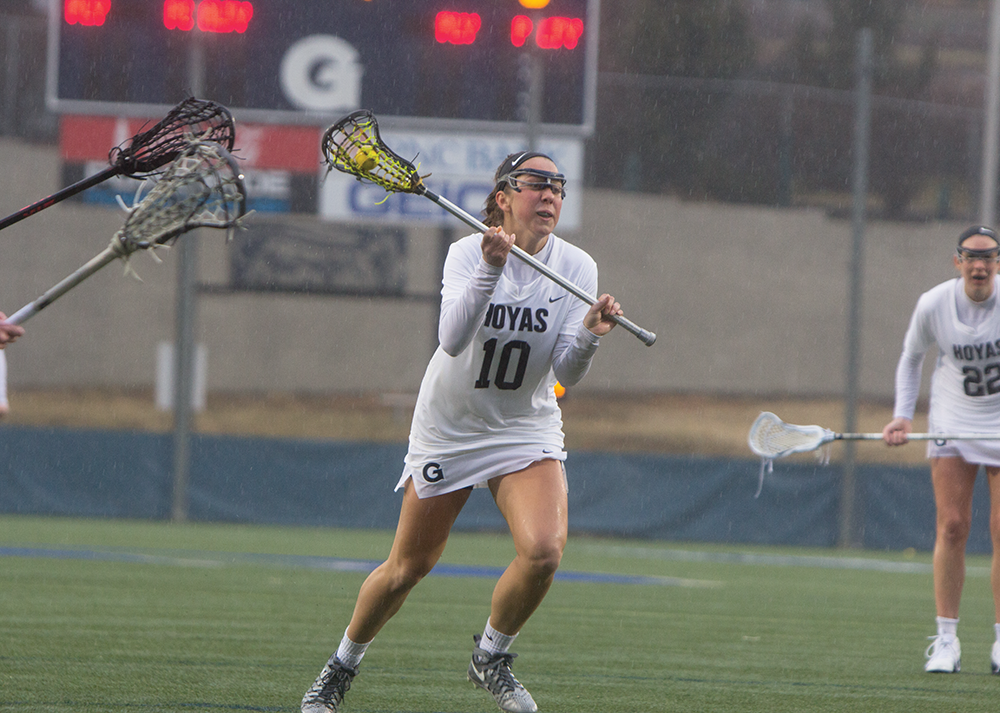 After a tough 18-6 loss to the undefeated University of Pennsylvania on Cooper Field last Saturday, the Georgetown women’s lacrosse team is looking forward to a chance to defeat conference rival Villanova Saturday.

In last weekend’s matchup with the Quakers (6-0), junior attack Taylor Gebhardt led the Hoyas (4-2) in points, scoring three of the Blue and Gray’s six points. The Hoyas picked up 19 ground balls to the Quakers’ 15 but ultimately felt the biggest deficit in draw controls when Georgetown pulled in five to Penn’s 20.

After five weeks of competitive, nonconference play, Head Coach Ricky Fried said he feels the Hoyas have begun strong with a 4-2 record, having beaten two teams, Johns Hopkins and Delaware, that they have not beaten in the last couple of years.

“We feel like both ends of the field were trying to figure out who they are, who we’re going to be, how that’s going to play out and continue to evolve throughout the season,” Fried said.

The Hoyas are opening up Big East conference play Saturday against rival Villanova (5-2).

Fresh out of last weekend’s 12-point loss, the team is focusing on mental resiliance as it prepares to take on Villanova. Following its last match, Georgetown’s intention is to develop an emotionally intense practice culture that spills onto the field during high-stress matches. For Fried, that means continuing to push more during play and, as a team, slipping into contentment with the current record.

“The biggest area to work on for us is how we’re practicing day in and day out and making sure that practices mimic, or are tougher, than game situations so we know how to deal with [games] more emotionally than physically,” Fried said.

The Hoyas are facing off against a confident Villanova team that will be coming into the match with two back-to-back home wins against Rutgers (4-4) and Drexel (1-6).

“They are leading the conference, if not the nation, in assists per game. So, they play a real team-oriented offense. They share the ball really well,” Fried said.

Aside from the spread offense, Georgetown is also preparing to score against Villanova’s diverse defense.

“Defensively, they play a zone and man-to-man so we have to prepare our offense for both sides in that area,” Fried said.

The Blue and Gray faces off against the Wildcats at Cooper Field, with the game set to start at 1 p.m.