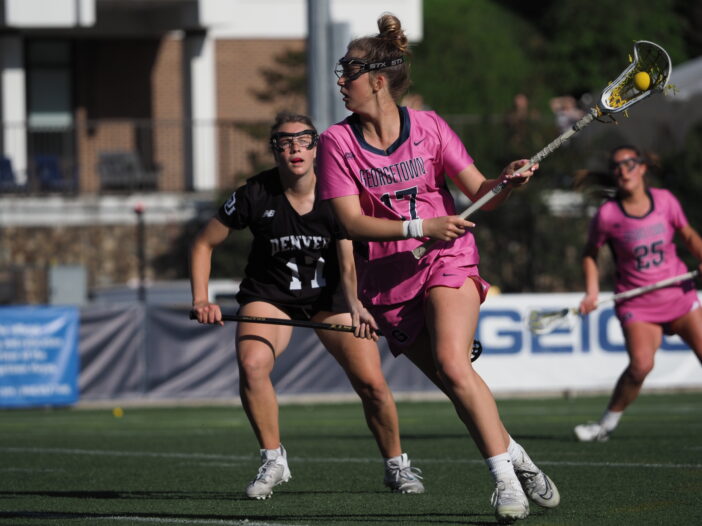 Hoping to secure another Big East win, the Georgetown women’s lacrosse team showed it would not go down easy at home against the favored University of Denver Pioneers. However, the Hoyas (7-7, 2-1 Big East) ultimately fell 14-12 to the No. 9 Pioneers (13-1, 3-0 Big East) in the April 15 contest, marking their first conference loss of the season.

Amid an incredibly competitive fourth quarter, senior captain and defender Olivia Buckman intercepted a clear from the Denver goalkeeper and raced the ball all the way to the goal. Buckman scored her first career goal to bring the score to 13-12, proving that the Hoyas would battle the Pioneers until the last second.

Despite Georgetown’s comeback in the fourth, the matchup was not quite as competitive in the first half. Denver started the game with immediate offensive intensity, scoring 2 goals in the first five minutes and netting another with a minute left in the first quarter.

Meanwhile, the Hoyas could not find an offensive rhythm and struggled to get the ball out of their defensive end, ending the first quarter with a 3-0 deficit.

Although Georgetown’s defense did an impressive job trying to contain the relentless Denver offense in the second quarter, the Pioneers widened their lead to 5-0 as the Hoyas remained scoreless. Finally, with about nine minutes left in the half, Georgetown made its mark on the scoreboard as senior attacker Ali Diamond scored a goal off of a free position penalty.

Following Diamond’s goal, the Hoyas began to chip away at Denver’s lead but still trailed 7-2 at halftime.

A much more lively and cohesive Georgetown team emerged in the second half, finding more offensive opportunities through good passing and communication in spite of the aggressive Denver defense.

In the third quarter, the Hoyas began to close the score gap, and they answered each Denver goal with some of their own, outscoring the Pioneers 5-3 in those 15 minutes.

After a Denver goal left Georgetown down 10-5 with three minutes left in the quarter, sophomore midfielder Tatum Geist and graduate midfielder Erin Bakes helped bring the Hoyas into contention by each adding a goal.

That last shot from Bakes, who found the back of the net with only 15 seconds left of play, ended the quarter with the Hoyas only down by only three, 10-7.

The fourth quarter was perhaps the most evenly matched 15 minutes of play. Even though the Pioneers opened with a goal to put them at an 11-7 lead, Georgetown remained determined, going on a 3-0 scoring run in the next two minutes with goals from Geist, Bakes and first-year attacker Emma Gebhardt.

With the Hoyas right back in the game at 10-11, the teams continued to trade goals as the time wound down. Buckman made her incredible play to bring the team back to a 1-goal deficit after the Pioneers had gone up 13-11, but Georgetown, with only three minutes left, was unable to tie or win the game.

Denver added one more goal in the final minute, bringing the final score to 14-12. Despite the losing outcome, the Hoyas walked away from the game having mounted an impressive comeback against a skilled, top-ranked Denver and outscoring their opponent 10-7 in the second half. In addition, Georgetown shared the ball well, with seven different players scoring.

This match also marks the third straight game where the Hoyas have found the back of the net at least 10 times. After back-to-back losses where they struggled to score goals, they’ve been strong offensively in three straight Big East contests.

This game also highlighted the Hoyas’ resilience; coming back from a 0-5 deficit was not an issue, and the Hoyas seemed unfazed by the challenge.

Georgetown will next face off at Marquette (7-8, 2-1 Big East) on April 24 at noon. This is its second-to-last Big East game before the regular season comes to a close.