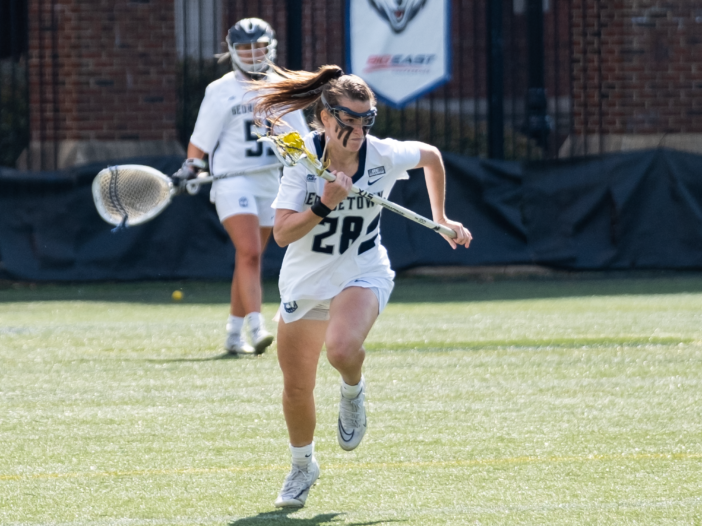 The Georgetown women’s lacrosse team kicked off their Big East schedule on the right foot, earning a win over the Villanova Wildcats 13-11. Despite an even 6-6 record on the season, the Hoyas still have a chance to become serious conference contenders with just four games remaining.

The first quarter of the April 2 game was intense. Villanova (4-8, 0-1 Big East) won the first draw control and put pressure on Georgetown (6-6, 1-0 Big East). After the Wildcats committed an early foul, the Hoyas quickly took advantage.

Georgetown graduate midfielder Erin Bakes fired the ball into the net from a free position shot to bag the first goal of the game.

Villanova won draw control following Bakes’ goal and scored with 12:07 left on the clock. Their attacking momentum led to 2 more goals in quick succession. Soon, the score was 3-1 in favor of the Wildcats with less than four minutes remaining in the first quarter.

Those four minutes proved to be ample time for the Hoyas to push back. Another goal from Bakes and Georgetown senior attacker Ali Diamond leveled the score to 3-3 at the end of the first quarter. The stat sheet still appeared uneven, though, with the Wildcats winning 6 draw controls to the Hoyas’ 1.

Just like they did in the first quarter, Villanova got off to a good start in the second, scoring 2 goals in two minutes. Frustrated, the Hoyas committed a couple of fouls on the Wildcats, allowing Villanova to score off free position shots and take a 7-3 lead with 10:41 left on the clock.

Georgetown finally inched back into the game with a goal from first-year attacker Emma Gebhardt. After exchanging goals, the Wildcats led 8-5.

With just over a minute left in the second quarter, Bakes scored another goal for the Hoyas, completing a first-half hat trick. But again, the Wildcats dominated the stat sheet, winning 7 draw controls compared to the Hoyas’ 2.

Although they returned to the locker room down to Villanova, the Hoyas burst out in the second half on fire. Georgetown started the third quarter strong with 4 consecutive goals, taking a 10-8 lead.

Still, the Hoyas’ aggressive run did not last forever. With exactly a minute left in the third quarter, Georgetown junior goalkeeper Emily Gaven saved a shot on goal by Wildcats attacker Olivia Piccirilli. Just a few seconds later, Hoyas graduate defender Nicole Massimino was shown a yellow card. Up one player, the Wildcats scored two consecutive goals to even the score at 10-10.

Encouragingly, the Hoyas were not as far behind on draw controls in that quarter. They won 3 draw controls as compared to the Wildcats’ 4.

The fourth quarter began with a quick goal from Georgetown sophomore midfielder Tatum Geist. The Hoyas then led 11-10. Soon enough, the Wildcats got a goal back. Both teams were driven to win.

With 8:36 remaining in the game, Georgetown began to pull away, scoring 2 goals in under two minutes. Villanova fought hard but could not manage to score in the little time remaining.

The close game ended with the Hoyas up 13-11. In total, the Hoyas outshot the Wildcats 27-23. The Wildcats won 19 draw controls, doubling the Hoyas’ 9.

Next, the Hoyas will visit the Butler Bulldogs in Indianapolis, Ind., on April 9 at 12 p.m.