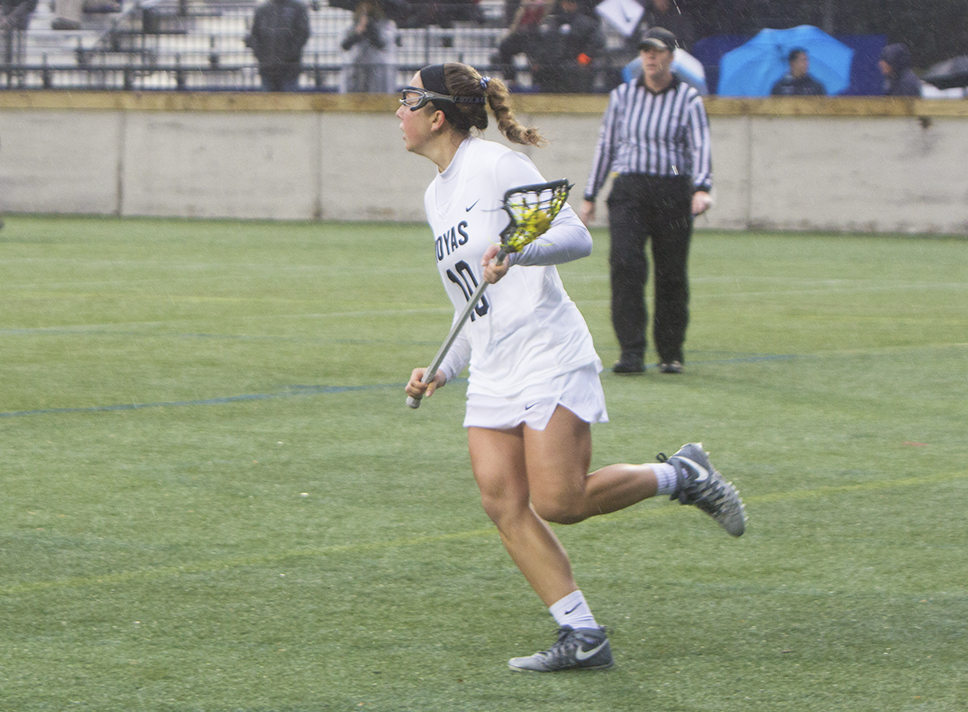 The Georgetown women’s lacrosse team won three of its four matches over the last two weeks, defeating Drexel, Johns Hopkins and Delaware and losing to the University of Pennsylvania. On Feb. 24, the Hoyas easily beat the Drexel Dragons 16-8 in a game that Head Coach Ricky Fried deemed “a good team win.”

Georgetown’s defense was equally effective. Drexel took nearly 20 minutes to respond with two goals of its own. Georgetown quickly countered with a five-goal run to end the half, which featured goals by both Lynch and Bruno, as well goals by junior midfielder Francesca Whitehurst, junior attack Taylor Gebhardt and senior attack Rachel Rausa. The Hoyas went into halftime leading 10-2.

Drexel scored the first goal of the second half, not allowing Georgetown to dominate offensively as much as in the first. Still, Georgetown maintained a comfortable lead. In total, eight players scored for the Hoyas on Saturday.

In addition to her three goals, Bruno contributed three assists to lead her team with a total of six points against Drexel. Sophomore attack Emily Ehle was not far behind her, with two goals and two assists that totaled four points. Ryan and Lynch had three apiece.

After Georgetown’s loss to Towson on Feb. 19, Fried said his practice plan was to focus on draw controls. The practice paid off, as the Blue and Gray won 16 draw controls to the Dragons’ nine.

“We played with a lot of energy, and I’m excited about our improvement,” Fried said in an interview with GUHoyas.

The Drexel game was Georgetown’s last away game before a six-gamelong home stand. The first of those six games took place  Feb. 28 on Cooper Field against No. 19 Johns Hopkins (5-2), which Georgetown upset 15-14.

Like last year’s matchup between the two teams, which Johns Hopkins won in overtime, Wednesday’s game was close. The Hoyas got off to an early 3-1 lead, but the Blue Jays got right back in the game, and the teams traded leads for the rest of the half. Entering halftime, the scoreboard read 9-8 in favor of the Hoyas.

In the second half, Georgetown got off to a hot start: A series of goals paired with improved defense allowed the team to take a 15-11 lead, its largest of the game, with 7:15 to play. Although a Hoya victory appeared to be well in hand at that point, the Blue Jays made a final push with a series of three goals in the final five minutes. Still, the Georgetown defense remained composed and was able to force a turnover on the final Hopkins possession to secure a 15-14 victory.

Eight different Hoyas found the back of the net against the Blue Jays, with Whitehurst, Lynch and Gebhardt leading the way with three goals apiece. Junior goalkeeper Haelle Chomo had a solid outing in the cage with seven saves, and strong team defense forced 20 Hopkins turnovers. Seibel and Whitehurst collectively accounted for four-fifths of the team’s 15 draw controls, with six apiece.

Fried again highlighted the importance of the Hoyas’ depth.

“This was an entire team win,” Fried said. “It wasn’t perfect, but we were able to overcome our own mistakes and come away with a quality victory.”

On March 3, Georgetown was able to extend its winning streak to three games with a 12-8 wire-to-wire win over the University of Delaware (2-3). The Hoyas got revenge on the Blue Hens after suffering a loss in last season’s opener.

The offense set the tone for Georgetown, and goals from Lynch, Ryan and Bruno put the score at 3-1 just five minutes into the first half. The Blue Hens were able to cut the lead to one, but a four-goal flurry from the Hoyas put the score at 7-2 with just over seven minutes remaining in the half.

Delaware gained momentum from there, scoring two goals to close the half and another one at the beginning of the second to cut Georgetown’s lead to two. After trading goals, the Hoyas went on a 3-0 run, with two goals from Bruno and another from Gebhardt. Delaware, down 11-6 at this point, made one final push and scored two goals. Yet, senior attacker and captain Sarah Cheney found the back of the net in the final minute to give the Hoyas a 12-8 victory.

Bruno led the surging Georgetown offense with five goals, a career best, while Seibel and Ehle added two assists apiece. The Hoyas again managed to put up a balanced stat sheet, as eight different players were able to score goals. In net, Chomo remained steady with seven saves on 20 shots. Georgetown also managed to command the draw control battle, with 14 to Delaware’s seven.

“We played solid on the defensive end of the field, but we need to clear the ball better so we aren’t forced to play defense for so long,” Fried said. “It was an important game to win heading into a full week of practice.”

Georgetown was back in action on Saturday, taking on No. 13 University of Pennsylvania (6-0) on Cooper Field. Georgetown lost 18-6 in a matchup Penn dominated offensively. After the Hoyas tied the game at four with three minutes left in the first half, the Quakers went on a 14-2 run to close out the game, including six unanswered goals to open the second half. Penn outshot Georgetown 27-16.

Georgetown looks to bounce back from its loss to Penn next Saturday against Villanova in the team’s first conference game of the season. The game is on Cooper Field at 1 p.m. on March 17.