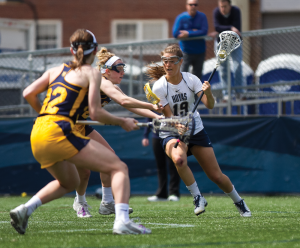 As the No. 19 Georgetown women’s lacrosse team enters a challenging weekend of conference games, it is looking to build off of its win over Marquette last Saturday. On Friday, Georgetown (4-7, 1-1 Big East) will travel to take on the University of Connecticut (7-4, 2-0 Big East), which has won its past six games, including a 12-11 overtime win over Rutgers, whom the Hoyas will play on Sunday. Rutgers (6-6, 0-2 Big East) has struggled with conference play so far this season and is looking for its first conference win.

The Hoyas’ offensive production was not in short supply Saturday, and the team is looking to build upon this in its upcoming games. Georgetown senior midfielder Kelyn Freedman received the Big East Offensive Player of the Week award Tuesday after her efforts in Georgetown’s games against the University of Pennsylvania and Marquette.

Against Penn, Freedman notched three goals and doubled that against Marquette for a career-high of six goals. It is her first weekly award and Georgetown’s first this season. Freedman will be a key player in Georgetown’s success this weekend, and her veteran skills will help in the two big conference games.

The matchup on the road begins with Connecticut, a team that is on a six-game winning streak. Past victories include wins over conference opponents Temple and Rutgers. The Huskies have been favored in close games this season, including four one-goal-game victories. These Hoyas have not had as much success in close games this season, going 2-3 in one-goal games. However, Georgetown is not looking back on its tough games earlier this season. With the majority of their conference play still ahead, the Hoyas are focusing on winning the games that matter the most.

“At this stage of the game, we’re looking at [the schedule] as we’re one in one [in the conference]” Head Coach Ricky Fried said, “Our goal right now is focusing on the conference and [Connecticut is] the next opponent in the way. We’ve traditionally done very well in the conference, so we’re confident, but not overconfident because of what has happened thus far.”

Connecticut sophomore goalkeeper Shannon Nee has been named Big East Defensive Player of the Week twice this season for her efforts in the cage. Her latest award came after her impressive performance against Fairfield, in which she had seven saves, leading the team to a one-goal victory. Teammates sophomore midfielder Katherine Finkelston and senior midfielder Lauren Kahn will be dangerous offensively to Georgetown as they lead Connecticut with 27 and 24 goals, respectively.

“[Nee] gets a lot of shots that are rushed, and she does a really good job of holding position, so I think the biggest thing for us is going to be patience and making sure we’re disciplined in the offensive end of the field. When we do get opportunities, we have to make sure we’re shooting to the pipes and not just turning and throwing at the goal,” Fried said.

Last Saturday, Connecticut matched up with Rutgers in New Jersey. While Rutgers led 7-3 at the half, Connecticut had a late second half comeback in store. The Huskies scored eight goals, plus one in overtime, to grab the victory.

After the game on Friday, Georgetown will immediately travel to Piscataway, N.J., where it will take on Rutgers on Sunday afternoon. The Scarlet Knights have lethal offensive players who can score from all angles of the cage. Similar to the game against Marquette, Georgetown will look to its defense to help out freshman goalkeeper Maddy Fisher in goal. Rutgers’ key player is redshirt junior midfielder Lauren Sbrilli. She leads the team with 16 goals and 20 points.

“The biggest challenge, I think, is the turnaround time, physically. We’re not used to that right now. It is a travel weekend, so that makes it a little challenging,” Fried said. “But really, we have to make sure the girls are focused on UConn first and then move on to the next thing, we don’t want to get too far ahead of ourselves.”

Last season, the Hoyas defeated the Huskies 9-6 in a closely contested matchup. The Hoyas also came out victorious over the Scarlet Knights, though with more ease in a 13-5 final decision. While Georgetown’s offense has evolved, its core has remained with Freedman and junior attack Caroline Tarzian at the center. Freedman leads the team with 25 goals and five assists, while Tarzian follows with 20 goals and four assists. On the defensive side, the Hoyas continue to emphasize the importance of teamwork.

“I think the biggest thing for us is to play team defense,” Fried said. “It starts with our individual play, but we need to have a team concept and make sure all eight of our defensemen, counting the goalie, are working in unison.”