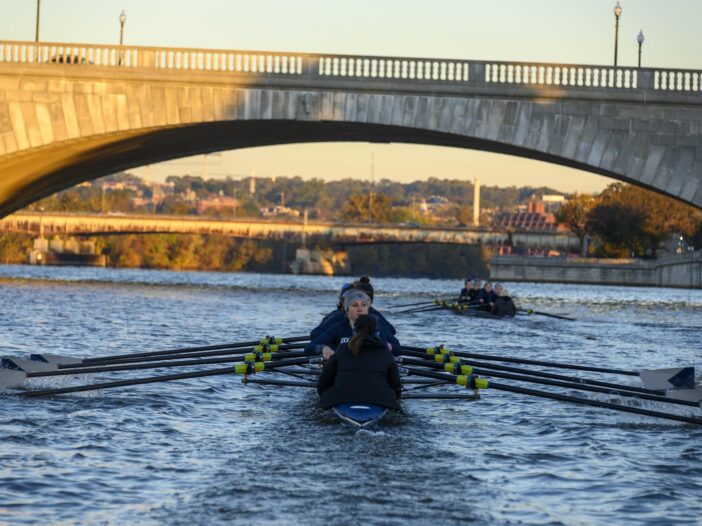 The Georgetown University women’s crew team rowed to victory in the annual DMV George’s Cup on April 17 at Sandy Run Regional Park in Virginia. The Hoyas won their second straight competition after also taking home the hardware their last time out at the Knecht Cup April 9-10.

George’s Cup is an annual regatta consisting of teams from Georgetown, George Washington and George Mason. This regatta was an openweight only event, so the Hoyas’ lightweight women’s rowing team did not get the opportunity to race. The lightweights will be out of action until May 1 at the Eastern Sprints in Worcester, Mass.

The Hoyas had a strong showing overall, winning three of their four races. The Varsity 4s, Varsity 8s and Third Varsity 8s all won their races, while the Second Varsity 8s claimed second place. Overall, it was a comfortable claim to the top crew at this year’s regatta.

Junior Katie Edling, who is currently the stroke seat of the Varsity 4s, expressed appreciation for her team’s performance and an eagerness to see what the rest of the season has in store.

“All four boats did an amazing job. It’s exciting to move forward in the season towards the championship and eventually Patriot Leagues,” Edling told The Hoya. “It’s also great to see our hard work come to fruition in wins like this.”

“The past few weekends have proven that their determination is paying off as the team has demonstrated a significant increase in speed. The George’s Cup win is another example of the whole team working together to push the program to a new level.”

There will be steep competition waiting for the Hoyas in North Carolina. Three top-20 teams from the Pocock CRCA Poll form the favorites in the field: No. 12 Duke, No. 14 Syracuse and No. 16 University of Pennsylvania.

Edling spoke to her excitement at facing these accomplished teams and noted how her team’s development this season will propel the Hoyas towards future victories down the stretch.

“I think the team has really grown a lot and it’s going to show in our results later in the season,” Edling said. “We’re eager to compete against this competitive field, especially with this last win under our belt.”

The women’s openweight rowing team will look to continue their recent success by pressing for potential upsets this weekend. This should also provide the Hoyas with a better understanding of their form heading into the Patriot League Rowing Championship, facing nationally-ranked competition after a few competitions against unranked opponents.

The Hoyas will compete in the Lake Wheeler Invite this Thursday through Saturday, with events starting April 21 at 11:00 a.m.