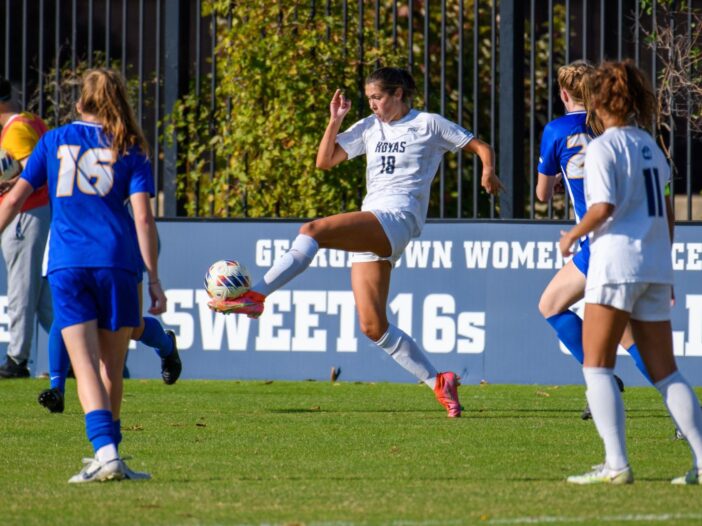 Georgetown’s successful draw against Penn State, who ended up winning the Big Ten conference and advancing to the Sweet 16 of the NCAA tournament, was a promising sign of the season to follow. In their home opener versus the University of Massachusetts Lowell (7-7-4, 4-2-2 American East) on Aug. 21, the Hoyas won 3-0, but this shutout was just the first of many.

In their third game of the season, the Hoyas lost 1-0 to the No. 11 University of Virginia (16-4-3, 6-2-2 ACC). This was their last loss of the season, with three months’ worth of ties and victories, until their defeat against Pittsburgh in the NCAA tournament.

Georgetown proceeded to draw against two major conference teams — North Carolina State University and the University of Maryland — before rattling off seven straight wins and winning 15 of its last 17 games preceding the NCAA tournament.

“One of the noted soccer pundits had us finishing fourth in the Big East,” Head Coach Dave Nolan said in an interview with The Hoya. “That was great for me because it gave me something to hang on the team meeting board.”

The Hoyas proved this pundit wrong all season, as they went 8-0-2 in conference play with a Big East regular season championship, while simultaneously adding on their sixth Big East tournament title in seven seasons.

Georgetown received the fifth seed in the NCAA tournament, and after a first-round victory over Hofstra University (10-8-4, 3-4-2 Colonial Athletic Association), the Hoyas lost against the fourth seed Pittsburgh Panthers, marking the end of their season.

“I think it was an outstanding season, all things considering,” Nolan said in an interview with The Hoya.

“The team always wants to play one more game, ” Vicari said. “The year was a success for the program.”

The Hoyas were led by an unbelievable defense. Anchored by senior midfielder Julia Leas, who Nolan believes will be named an All-American, the Hoyas shut out their opponent in 16 of the 22 games they played this season.

“The team had the best defense in the country,” Nolan told The Hoya.

Senior forward Gia Vicari led the team offensively with six goals, and first-year forward Henley Tippins finished second with five. Tippins’ scoring record was all the more impressive given that she only played in the first six games: her time was cut short due to a season-ending injury.

Nolan believes the team will be even better next season and will have a chance to go far in the NCAA tournament, especially with Tippins back on the team. While Nolan was optimistic on the Hoyas’ future, he emphasized that he believes the program struggles from a lack of support.

“I sometimes feel this group doesn’t get the credit it deserves,” Nolan said. “People have taken the success for granted.”

“I am very disappointed with the fan turnout by Georgetown students when we have got a nationally prominent women’s soccer program,” he said. “I fail to see why we cannot show them more support.”

Nolan’s comments merit reflection, and as the Hoyas hope to soar to new heights next season, hopefully the student body can rise to Nolan’s challenge.