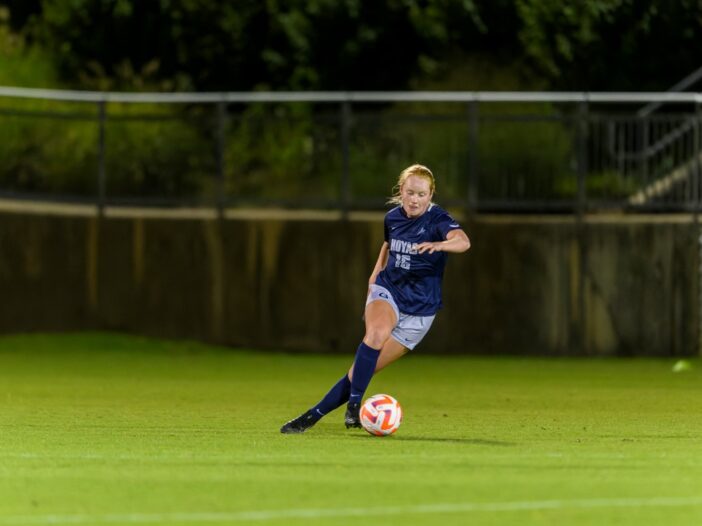 Playing spoiler to the Providence Friars on their senior day, the Georgetown women’s soccer team triumphed in a tightly contested 1-0 victory. The Hoyas increased their streak of consecutive shutout games to 11 thanks to another dominant performance by their back line. The shutout helped the Hoyas solidify their place atop the Big East, widening the gap between them and Xavier University to five points ahead of the final stretch of the regular season.

28 minutes into a scoreless match between Georgetown (12-1-4, 8-0-1 Big East) and Providence (4-9-2, 2-4-1 Big East), Hoyas’ sophomore midfielder Eliza Turner turned a beautifully worked short corner kick into a perfect shot attempt. Her shot slithered through a sea of bodies before nestling its way past the helpless dive of Providence Friars’ goalkeeper Emma Bodmer and into the bottom left corner of the goal. This goal proved to be the difference in a hard-fought win for the Hoyas.

For the first few minutes of the opening half, the Hoyas weathered the storm of the Friars’ progressive passing combinations and relentless pressure. Despite Providence’s dominant possession, they were unable to penetrate Georgetown’s stellar defense.

That defense, led by senior midfielder and defender captain Julia Leas, remained composed throughout the match despite tremendous pressure down the stretch. The unit has led the Hoyas to the remarkable feat of not having conceded a goal in 996 consecutive minutes of open play.

After settling into the game, the Hoyas began to press higher up the pitch and pinned the opposition in their own half, creating set piece after set piece in goal scoring positions. The Hoyas excelled in this regard as they have all season, winning nine corners and only conceding one to their opponents. The Hoyas unsurprisingly scored off of yet another set piece when Turner scored in the 28th minute for her first goal of the season.

Towards the end of the first half Providence’s Hannah Pinkus had a golden chance to tie the score from close range, but senior goalkeeper Allie Augur’s fantastic block kept Georgetown atop as they reached halftime.

For much of the second half, the Hoyas continued to ramp up the pressure by winning the ball high up the pitch and finding good combinations that allowed them to drive down the sideline. This opened up a couple of scoring opportunities for the team’s leading goal scorer, senior forward Gia Vicari, but the Friars’ defense prevented her from scoring.

Despite the seemingly lacking goal threat from the Georgetown front line, their pressure on the opposition’s back line, especially from sophomore forward Maja Lardner, was crucial in creating chances for the team. The Hoyas’ offensive prowess also limited the pressure placed on the defense by preventing Providence from building any consistent momentum going forward.

The final 10 minutes were a true test of the resiliency for the back line as Providence began to overwhelm Georgetown and pose a serious threat to its narrow lead. Mere minutes away from the final whistle, a beautiful penetrating ball from Providence midfielder Alexis Rothmann found forward Gillian Kenney for a shot on goal, but another crucial save by Augur sealed the deal for the Hoyas. This save was the last of four for Augur, who has yet to concede a goal across all six of her starts this season.