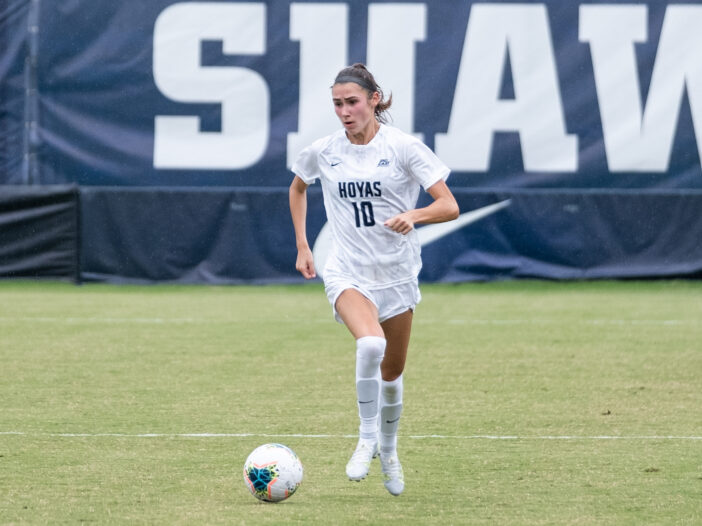 Under clear skies at Albert-Daly Field in Williamsburg, Va., the Hoyas extended their undefeated season while winning just their second game against the Tribe in 10 matchups all-time. Following three straight draws, the Hoyas seem to have returned to their winning ways with two straight shutout victories.

In the first half, No. 25 Georgetown (4-0-4) commanded possession from the opening kickoff, totaling five shots and five corner kicks while shutting out William & Mary (2-5-0) in both categories. However, stout defensive play from both the Hoyas and W&M led to a slow remainder of the first half following Georgetown’s initial offensive attack.

The Tribe’s young back line and goalkeeper were no match for the Hoyas. Georgetown’s offense was led by the prolific junior forward Gia Vicari, who logged two goals and an assist. Georgetown recorded 10 total shots on goal, converting 60% into points against the inexperienced defense.

Georgetown found the back of the net early when senior midfielder Maya Fernandez-Powell’s well-placed corner kick led to an uncontested header into the goal by graduate midfielder Daisy Cleverley just two minutes into play. The Hoyas continued to play aggressively on offense, totaling three corners within the opening 15 minutes and consistently using forwards to box out the keeper.

Georgetown made few errors during the game and showed great composure both on William & Mary’s side of the pitch and in their own box. The Tribe struggled to find a spark against the Hoyas’ formidable three-defender back line and attempted their only shot on goal in the 80th minute.

However, William & Mary did show signs of life soon after Georgetown’s first goal by creating solid spurts of possessions, yet they struggled to convert passes into shot opportunities. The Tribe’s most threatening possession of the first half came from forward Gabriella Kurtas’ dangerous through-ball twenty minutes into play, but textbook tackling from Hoya graduate defender Sydney Cummings returned the ball back to Georgetown.

The Hoyas capped off a controlled first half with a ground shot slotted to the corner by sophomore midfielder Tatum Lenain, which was assisted by a pass through traffic from first-year midfielder Eliza Turner. William & Mary, down a surmountable two goals, went into the second half with a desperate need to create offensive opportunities after logging no shots through the first 45 minutes.

Early in the second half, Vicari quickly quieted hopes of a William & Mary comeback. Assisted by senior midfielder Devon Lis, Vicari slipped past a napping Tribe defense and capitalized with a masterful right-footed ground shot slotted to the far post. From there, William & Mary struggled to put up much of a fight, allowing another Georgetown goal just five minutes later.

With 33 minutes left in regulation time, Vicari again outran a Tribe defender to score a controlled left-footed shot off an assist from junior midfielder Julia Leas. The Hoyas continued to capitalize and wear down a lethargic and fatigued William & Mary defense. A bright spot for the Tribe defense was a tremendous jumping save from goalkeeper Grace Lemely to deny a goal from Turner.

Georgetown’s most impressive goal came in the 63rd minute, when a precision cross from senior defender Jenna Royson and a touch from Vicari set up first-year defender Cyanne Doyle for an easy tap-in. The Hoyas showed chemistry in their three-on-two attack, culminating in their fifth goal of the match.

Fernandez-Powell clinched the six-goal victory with a penalty kick to secure her second goal of the night, striking the ball toward the right post as the keeper dove toward the left.

The Hoyas look to their first Big East matchup on the road against Creighton (6-2-1) in Omaha, Neb., on Sept. 23. The Bluejays are coming off a loss against Iowa State and will look to bounce back against a disciplined and talented Georgetown team.