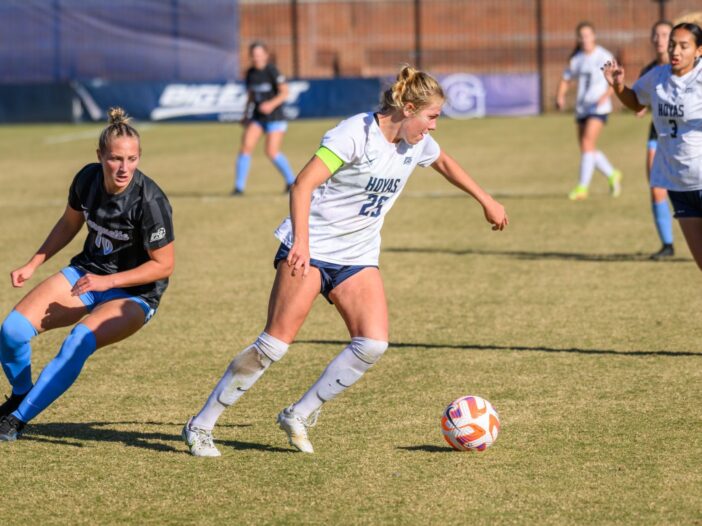 Despite two early goals by the Butler University Bulldogs, the Hoyas were able to erase the deficit as a miraculous last-minute goal by graduate midfielder Emma Davis tied the game. The tie extended the Hoyas’ undefeated streak and helped secure their first-place finish in the Big East over Xavier.

The game started in Butler’s favor, as midfielder Talia Sommer converted on her third shot of the day in the 17th minute on an assist from junior forward Abigail Isger. The Hoyas  struggled to convert its opportunities, missing three shots before Butler forward Abigail Isger scored another goal to double the Bulldogs’ advantage, 2-0, assisted by senior midfielder Aliya Diagne.

Georgetown went into the locker room down 2-0 at halftime, with its first-seed finish not yet guaranteed.

However, Head Coach Dave Nolan said that during the break, he was not discouraged by the early deficit.

“[We] still felt pretty good at half time, and I told the girls to keep doing the right things and we would get our chances,” Nolan told Georgetown Athletics.

Coming out of the break, Georgetown’s defense found its groove, preventing Butler from taking a shot in the first twenty minutes of the half. This gave the offense the chance to create meaningful scoring chances on the other end. In the 64th minute the Hoyas got on the scoresheet, as sophomore midfielder Eliza Turner slipped a shot past the Butler goalkeeper to pull them within one.

In the final 26 minutes, the Hoyas looked like the more threatening team as their offense relentlessly searched for the equalizing goal. They attempted seven shots during this late game period. This reflected the overall shot disparity in the contest, as Georgetown took 17 shots in the game compared to Butler’s 6. The shot disparity was particularly disproportionate in the second half, with Georgetown taking 10 shots while holding Butler to just 1.

Georgetown’s aggressiveness finally paid off when, with just 51 seconds left, Davis scored to tie the game at 2-2. Butler managed to get a shot off in the final seconds, their only one of the second half, but it sailed harmlessly over the crossbar as time expired.

By going on the road and earning a point in their final game of the regular season, the Hoyas cemented their number one finish in the Big East standings and capped off a dominant year.

Georgetown fans haven’t seen their team lose a match since Aug. 25, the day after classes started this semester. Butler’s two goals are the first the Hoyas have allowed since Sept. 1; over that period, they outscored their opponents 20-0.

While the most impressive part of the Hoyas’ campaign has been their stout team defense, individual players have still shined. Senior forward Gia Vicari had another stellar season, earning a Big East weekly honor roll nod and an Offensive Player of the Week award in September. Senior midfielder Julia Leas made regular appearances on conference awards, receiving recognition on four separate occasions.

Georgetown enters the Big East tournament as the top seed. The Hoyas have a first-round bye, meaning they will take the field again Thursday, Nov. 3 in a rematch of last year’s championship game against St. John’s University. The team will look to continue its dominant run and secure its fifth conference championship in the past six years.

The conference semifinal against the Red Storm kicks off Nov. 3 at 6:30 p.m. Fans can watch the game in person at the Maryland SoccerPlex or stream it live on FloSports.