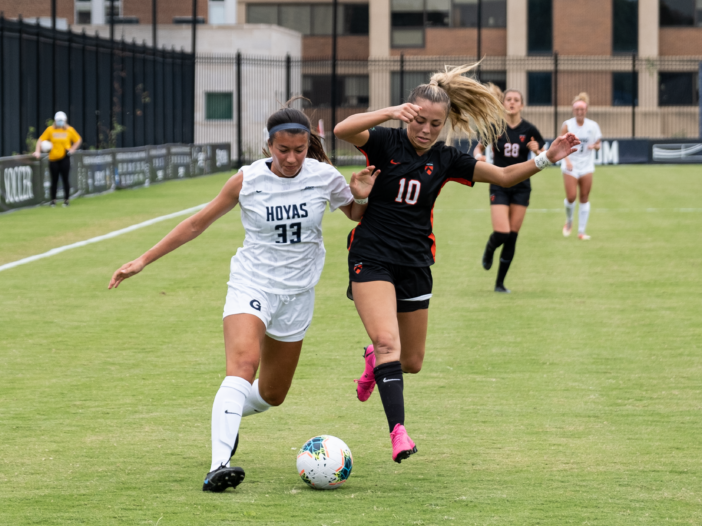 This was the third matchup between the two programs, with the prior meetings in both 2018 and 2019 ending with a Georgetown win in overtime. With the addition of this year’s clash, the Hoyas and Tigers have needed overtime in all three matchups.

The first half featured a battle for possession between the Hoyas and the Tigers, with both teams only having two shots on goal, unable to maintain control in the offensive end. In the 37th minute, Princeton forward Jen Estes headed the ball over junior goalkeeper Allie Augur off a cross from defender Tatum Gee to give the Tigers a 1-0 lead going into halftime.

The Hoyas came out determined to stay in the game and get into a rhythm in the second half. With 32 minutes left in regulation time, Georgetown got its chance to tie the game. From the left wing, senior forward Boo Jackson sent a beautiful cross into the box for first-year defender Cyanne Doyle, who deftly shot the ball into the lower left corner of the net.

The Princeton Tigers continued to be tough competitors throughout the second half. The Tigers’ speed on the top line gave them several offensive chances to extend their lead. Georgetown’s Augur had a spectacular performance, boldly coming off her line several times to shut down dangerous runs from Princeton and render them scoreless.

Regulation time ended with the two teams still keeping each other at bay in a 1-1 draw, and the game progressed into overtime. During the two ten-minute overtime periods, both teams had promising chances on goal. Notably, Georgetown first-year midfielder Eliza Turner made a phenomenal tackle on a one-to-one defensive matchup in the box between Augur and the Princeton offense, keeping Georgetown in the game. The Tigers had one final chance to score on a corner kick with less than a minute left, but Augur heroically punched out the ball to shut down the scoring opportunity.

Ultimately, neither team could claim a game-winning brace, leaving the final score at a draw of 1-1 after overtime.

The Hoyas were prepared for a tough challenge against a competitive Princeton side based on past experience, according to Georgetown women’s soccer Head Coach Dave Nolan.

“We knew it was going to be a tough game,” Nolan said in an interview with The Hoya. “Princeton is traditionally a team that competes for the Ivy League Championship. This year’s group is very talented and well-coached, and we have gone into overtime every time we’ve played them.”

This Princeton matchup was also special for a certain familial reason, as Morgan Wiese, the daughter of Georgetown men’s soccer coach Brian Wiese, was a starting defender for the Tigers. The two shared a heartwarming hug after the game.

Georgetown was looking for a big moment to earn a game-clinching goal but was unable to do so, according to Nolan.

“I was disappointed in the manner in which we gave up the first goal, but I was happy with how our team dug in and found a way to get the goal back,” Nolan said. “When we were tied 1-1, I felt we should have had more momentum but we just couldn’t quite get over the hump. It was kind of like a heavyweight boxing match where both teams were trying to throw a good punch but couldn’t throw one really good one.”

Next up for the Hoyas is a matchup against No. 13 West Virginia on the road Sept. 9, followed by a home game against No. 16 Rutgers Sept. 12.

For upcoming matchups against top-tier programs, the Hoyas will need to keep refining their game, according to Allie Augur.

“There are definitely a lot of things to improve on, especially with a program like ours that is super competitive and high energy,” Augur said in an interview with The Hoya. “We strive for perfection, which is a great mentality, but we are never satisfied. It’s going to be a great game on Thursday, and we are ready to come out hard and try to get a good result on the road.”