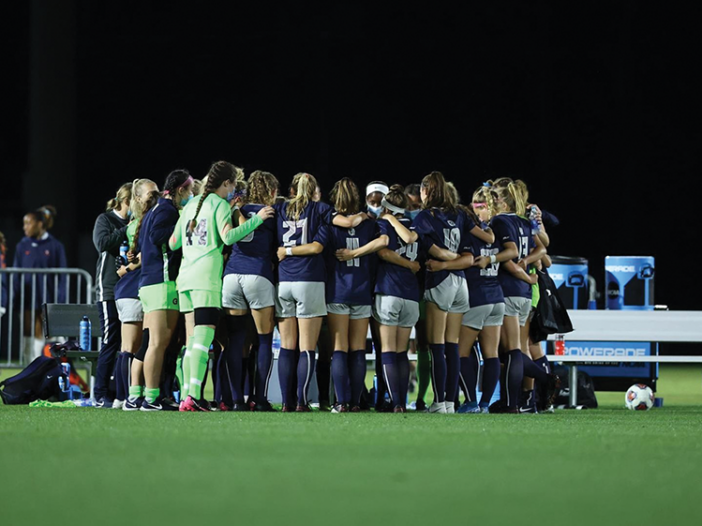 On Wednesday, Georgetown women’s soccer ended its dominant season with a heartbreaking loss against Texas Christian University. Following a delay because of lightning, penalty kicks decided the late-night match with the TCU Horned Frogs claiming a 3-1 victory.

Both teams displayed incredible defensive performances. Georgetown, with the best goals-against percentage in the nation, allowed just four goals the entire season, including the matchup against TCU. Senior goalkeeper Alyssa Navarrete kept the TCU offense scoreless in the first half. The Hoyas’ backline dominated as a unit to smother the speed and smooth transitions of the Horned Frogs.

On the other end, TCU goalkeeper Emily Alvarado kept her team’s defense tight despite strong attacks from the Hoyas. Alvarado, who holds the seventh-best save percentage in the NCAA, made six saves to help her team stay in the game.

However, after 31 minutes, Georgetown’s offense could no longer be contained. Senior forward Jenna Menta, coming off a game-winning last-minute goal against South Carolina on May 1, launched a shot from the top of the penalty box. The ball banged off the crossbar, landing at the feet of junior midfielder Maya Fernandez-Powell. Fernandez-Powell capitalized on the rebound, blasting the ball to the back of the net. As a result, Georgetown entered the half up 1-0.

Yet with 14 minutes remaining, TCU found a way to tie the game. Midfielder Yazmeen Ryan delivered a long ball to midfielder Michelle Slater in the 18-yard box. Slater made a beautiful shot that powered past a diving Lauren Gallagher, the Hoyas’ graduate goalkeeper.

Regulation time concluded just as heavy rain started. The game went into two 10-minute overtime periods in which no goals were scored. The fate of the game was determined by a penalty kick shootout.

Georgetown’s first penalty kick was converted by Fernandez-Powell, putting the Hoyas up 1-0. Moments after, strikes of lightning near the field delayed the game for nearly an hour.

Both teams returned to the pitch after the rain subsided. TCU’s Ryan quickly tied the penalty kick score at 1-1. The Horned Frogs’ goalkeeper Alvarado came up with two clutch saves, diving to the left both times to stop Georgetown senior defender Kelly Ann Livingstone and junior defender Charlie Kern. Meanwhile, TCU made its next two shots with beautiful placement far from Gallagher.

With TCU leading 3-1, the next shot by Georgetown first-year defender Erin Junkmann would decide the team’s fate. Junkmann placed her shot low to the left corner. The ball bounced off the goal post and away from the goal, ending both the game and the team’s season.

“We trained for the last couple of weeks for this scenario and we were confident but what probably messed us up was the lightning delay,” Nolan said in a post-game interview with The Hoya via phone. “We were a little disappointed because we felt like we were the better team and deserved more out of the game, but in sports, you don’t always get what you deserve.”

“We played at the same complex as we did in 2018 during the Final Four and it brought back so many memories,” Menta said in a phone interview with The Hoya. “For us, the Sweet Sixteen was the standard and we felt like we had more in us. We had winnable games that could’ve gotten us back to the Final Four and had that same team energy and confidence we had in 2018.”

Although this was an unfortunate end to the season, the Hoyas have much to be proud of. Georgetown persevered through an undefeated regular season. The Hoyas also recorded their fourth Big East Championship in five years, as well as an appearance in the third round of the NCAA tournament for the fourth time in program history.

Reflecting on an abnormal senior season, Menta was full of pride and gratitude for her team.

“This whole season I’ve been trying to take it a day at a time,” Menta said. “This was not at all what I imagined my senior year being, but I have to give credit to my entire team. I’m really proud of everything our team has done this year and despite the circumstances, it was a great senior season.”