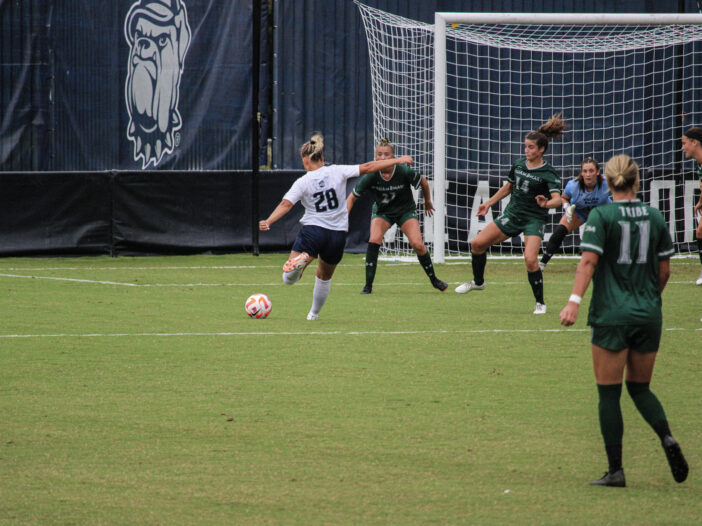 The No. 24 Georgetown women’s soccer team dominated William & Mary on both sides of the field in their Sept. 11 matchup. If not for multiple miraculous saves by the William & Mary goalkeeper, the margin of victory would have been much greater for the Hoyas.

Georgetown (3-1-3) sank its first goal of the match in the 15th minute. Off of a pass from senior midfielder Julia Leas, graduate defender Maya Alcantara shot on goal from the right side of the box. William & Mary (2-4-1) goalkeeper Zoe Doughty dove to block the shot, making an impressive save. However, senior forward Gia Vicari quickly tapped it in off the save to give the Hoyas an early 1-0 lead.

After it became clear that the Georgetown attack would cause problems for William & Mary, Doughty did everything she could to keep her team in the game. She started by putting an end to two fantastic opportunities for Georgetown in the 21st and 28th minutes. The first chance came when sophomore midfielder Claire Manning raced down the left sideline and blew past the William & Mary defense.

A leaping save by Doughty was the only thing that stopped her from widening the Hoyas’ lead. Seven minutes later, Georgetown once again pushed up the left side of the pitch, this time crossing into the middle of the box to sophomore forward Erika Harwood, who had a great look on goal but was blocked by Doughty yet again.

Once Georgetown finally got past Doughty the Hoyas extended their lead to 2-0 just seconds before halftime. After getting behind William & Mary’s defense once more, sophomore forward Maja Lardner passed to graduate forward Boo Jackson, who found the back of the net for the goal.

The second half was more of the same for Georgetown. The Hoyas’ swarming defense prevented the William & Mary front line from looking cohesive, while the Hoya offense continued to apply pressure on the other side of the field. Overall, Georgetown notched 21 shots, far more than the two from William & Mary. Defensively, the Hoyas committed only four fouls, 10 fewer than William & Mary.

“The defense was very good,” Nolan said in a postgame interview with The Hoya. “We’ve been working on a new system this week and I thought we did a good job with it. I thought our outside players, in particular Claire Manning, did a great job for us.”

After a foul was committed by William & Mary forward Madison Moon in the 50th minute, the Hoyas looked to go up by three. They almost did so off a free kick, striking it into the box and finding the back of the net before the shot was called offside. The Hoyas drew four offside calls throughout the second half, which seemed to be the only thing that could disrupt their rhythm.

Georgetown scored their third and final goal two minutes later. Vicari danced through the William & Mary defense, setting up sophomore forward Cyanne Doyle right in front of the net. Doyle knocked it in to score her first goal of the year.

“Before the goal, I thought we were going to win but it was still tense,” Kim said in a postgame interview with The Hoya. “Afterwards, I was able to sit back. I knew we had it in the bag.”

Nolan said his team needs to continue its dominance on the field to have a successful season.

“Overall, it was a great day and a good performance,” Nolan said. “I felt today that for the full 90 minutes we were the dominant team, and we did a good job of not allowing them to get any flow going. We pressed them hard, and it’s what we need to do if we are going to continue to have success.”

Georgetown will play next against West Virginia (3-2-3) on Sept. 17 at Shaw Field. The match will begin at 1 p.m., and it will be the Hoyas’ last matchup before conference play begins Sept. 22.