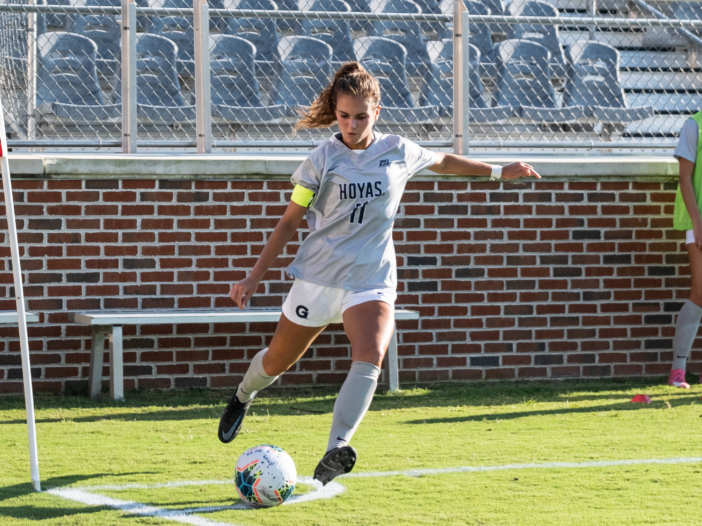 The Pirates (6-11-0, 1-8-0 Big East) put immediate pressure on the undefeated Hoyas (11-0-6, 7-0-2 Big East). In the third minute, Seton Hall created its first chance of the game when midfielder Laura Hooper shot the ball towards the bottom center of the goal. Georgetown junior goalkeeper Allie Augur made a comfortable save to block the effort.

In the 22nd minute, the Hoyas secured a free kick. Senior midfielder Maya Fernandez-Powell crossed the ball at a height and found the head of graduate defender Kelly Ann Livingstone inside Seton Hall’s penalty area. Livingstone headed the ball towards graduate defender Sydney Cummmings. Cummings found the back of the net, giving the Hoyas a 1-0 lead.

By the end of the first half, Georgetown was up by one goal and had outshot the Pirates 6-2. The Hoyas had also secured three corners while the Pirates had none.

The second half of the game began after several changes to the starting line-up of both teams. The Hoyas started off strong, putting pressure on the Pirates and managing a series of attempts on goal.

Gordon struggled as Cummings and Hoya sophomore midfielder Tatum Lenain took grounded shots towards the bottom center of the goal. At the one hour mark, Gordon came up big with a save, blocking Fernandez-Powell’s shot.

The Pirates also created a few chances on goal. Just a few minutes before the hour mark, they secured their first corner kick of the game, in which Augur easily caught the ball. Midfielder Cara Milne-Redhead later shot the ball towards the bottom left of the goal, but Augur again made the save.

The Hoyas put constant pressure on the Pirates for the remainder of the game. In the 63rd minute, Fernandez-Powell took a corner, crossing the ball towards Leas. Gordon came out of the goal to punch the ball away, but Leas got to it first. Leas’ goal increased the Hoyas’ lead to a comfortable 2-0.

Fernandez-Powell later took a free kick for the Hoyas, kicking from just outside the Pirates’ penalty area and putting the Hoyas in great position. Fernandez-Powell lofted the ball into the box, where Livingstone dodged Seton Hall’s defense to take the header. Gordon attempted to stop Livingstone’s header, but was unsuccessful. The ball bounced off Gordon’s gloves and into the goal, giving Fernandez-Powell her third assist of the game and the Hoyas a lead of 3-0.

The rest of the game was marked by many fouls from both Georgetown and Seton Hall. After the Hoyas’ third goal, the Pirates committed four fouls, while the Hoyas committed two. Seton Hall tried to fight back and even the score, taking two more shots but failing to score.

The game ended in a 3-0 victory for the Hoyas. The Hoyas outshot the Pirates 15-5 and secured six corners in total, compared to the Pirates’ two.

The Hoyas look to keep up their winning momentum on Shaw Field against the University of Connecticut Huskies (8-7-1, 4-4-1 Big East) on Thursday, Oct. 28 at 2 p.m. EST.