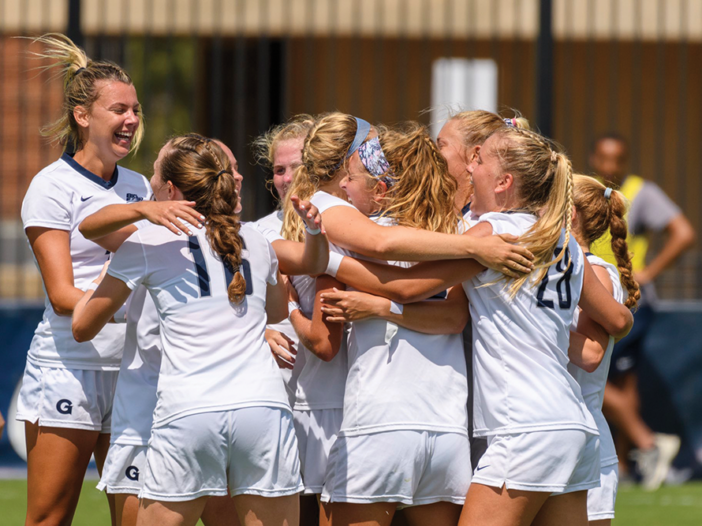 The Georgetown University women’s soccer team is set to kick off its 2021 season later this month, hoping to earn a spot in the NCAA Division I Women’s Soccer Tournament for the ninth straight season.

The Hoyas are looking to bounce back from their runner-up performance in the 2019 Big East Tournament, having won the competition the previous three seasons. The Hoyas were selected to finish first in preseason polls in their division under the new divisional format, which the Big East announced for the restructured 2020-21 women’s soccer season.

In September, the NCAA approved a plan to move the women’s soccer national championship to the spring, and the Big East Conference subsequently decided to play its season in the spring, while other conferences elected to play their respective seasons this past fall. The rescheduled Women’s College Cup will take place in May, with the semifinals and finals taking place May 13-17 in Cary, N.C. Only 48 teams will make it to the tournament this year, as opposed to the traditional 64, making the competition much more intense.

The Hoyas hope to finish near the top of the Big East standings and earn a spot in the national tournament with ease due to their strong play. Georgetown has found success in the tournament as of late, reaching the semifinals in two of its past four appearances. The Hoyas have yet to reach the tournament finals, losing to the University of Southern California and the University of North Carolina in 2016 and 2018, respectively.

Under the modified spring season, the Big East split its teams into two divisions, with the Hoyas competing in the East Division. Conference play is limited to intradivison play, meaning Georgetown will take on each division rival at home and on the road. These games will decide seeding for the eventual Big East tournament, where teams from both divisions will compete for the conference championship and an automatic spot in the 2021 NCAA tournament. Georgetown was selected to finish first in the conference in preseason polls for the fifth straight year and is hoping to live up to these expectations.

The Hoyas are set to open their season with two nonconference games against local rivals from the Washington, D.C.-Maryland-Virginia area. They will kick off the season in Fairfax, Va., as the Hoyas take on the George Mason Patriots on Feb. 25. The Hoyas will then return to Shaw Field to face off against the George Washington Colonials, who finished just a win shy of a NCAA tournament berth and were selected to finish second in the Atlantic 10 in preseason polls. Georgetown’s home opener is set to take place Feb. 28, with the game kicking off at 1 p.m.

Big East conference play will begin following the Hoyas’ two nonconference matches as Georgetown battles Seton Hall at Shaw Field on March 4. The Hoyas will play each of their Big East rivals twice during the season, playing each of their opponents either at home or on the road before facing them again in the other location. The Hoyas will close out their season with matches on the road against St. John’s and UConn on April 5 and 8.

Junior defender Jenna Royson was named Big East Preseason Defensive Player of the Year. Royson started in all 21 of the Hoyas’ games last season and proved herself as a strong leader on one of the best defensive teams in the country. The Hoyas will suffer due to the loss of six graduated players, but Head Coach Dave Nolan was able to recruit six strong first-years to hopefully fill some of the gaps. Also joining this year’s team are graduate transfers Daisy Cleverley and Kaitlyn Parcell, who line up as a midfielder and defender, respectively.

With a large part of the Hoyas’ 2019 roster returning, Georgetown fans have much to look forward to as the team works to reach the tournament for the ninth straight season and make a splash come May.