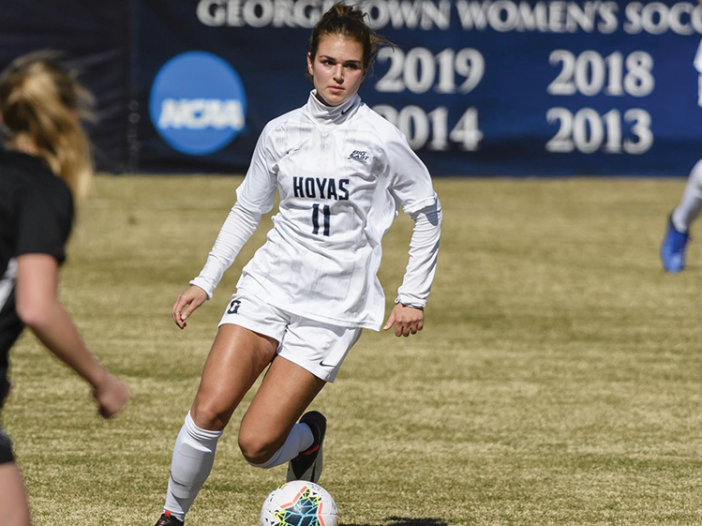 The No. 21 Georgetown women’s soccer team continued its undefeated season with a 1-0 home victory over the St. John’s Red Storm at Shaw Field on Sunday, March 14. Demonstrating offensive grit and an impressive defensive capability, the Hoyas played to their strengths as a team throughout the shutout.

This game was an important intraconference matchup for both the Georgetown Hoyas (6-0-0, 4-0-0 Big East) and the St. John’s Red Storm (5-2-0, 2-2-0 Big East). Because of the adjusted season, every win in the temporary East Division is crucial to ensure a spot in the Big East playoffs, where the top two teams in the East Division will face off against the top two teams in the Midwest Division.

With a 1-0 victory, the Hoyas kept their spot at the top of the East Division with an unblemished record.

After a subdued start to the game, senior forward Jenna Menta used her unmatched speed to beat the St. John’s defense and take the first shot of the game in the 16th minute. However, her shot went straight into the arms of the St. John’s goalkeeper Naya Lipkens.

There was a similar scene in the 22nd minute, when the St. John’s defense blocked close-range shots from both senior defender Kelly Ann Livingstone and sophomore forward Gia Vicari, after the Red Storm struggled to clear a dangerous corner kick from Georgetown junior midfielder Maya Fernandez-Powell.

The Hoyas made a breakthrough in the 35th minute, when a swift counterattack caught the Red Storm off guard. Fernandez-Powell made a stellar pass up the field to Vicari that bypassed the Red Storm midfield. Following this, Vicari beat three Red Storm defenders to pass the ball to sophomore forward Sofie Fox, who connected with the ball to find the back of the net.

Consequently, the Hoyas entered halftime with a 1-0 edge over the Red Storm.

After Red Storm defender Brooke Boyd caused a penalty by dribbling in the box, Senior midfielder Grace Nguyen stepped up to take the penalty kick. Although Nguyen skillfully placed the ball into the left corner of the goal, a save from Naya Lipkens denied Georgetown the opportunity to secure a two-goal lead.

The game concluded with a final score of 1-0 that did not reflect the Hoyas’ dominant play. Despite the low score, Georgetown outshot St. John’s 14-2, and the ball spent the majority of the game on St. John’s side of the field.

This game also highlighted Georgetown’s defensive prowess. Throughout the entire game, the Hoyas only allowed two shots on goal, neither of which were on target. Georgetown remains the only team in the Big East yet to concede a goal this entire season.
Following the game, Georgetown Head Coach Dave Nolan expressed satisfaction with the variety and depth of skills displayed in a postgame press conference.

“Today the most important thing was the 3 points, which we managed successfully to do. St. John’s is a very good team,” Nolan said. “I feel like we’re a tough team to stop, because we can hurt you in so many ways; we’re dangerous on set pieces, our outside backs get forward, our goals come from a variety of players, so I like where we are right now.”

The Hoyas will now look to continue their undefeated streak as they face the UConn Huskies (4-3-1, 2-3-1 Big East) on Thursday. Kickoff is scheduled for 2 p.m. EDT.