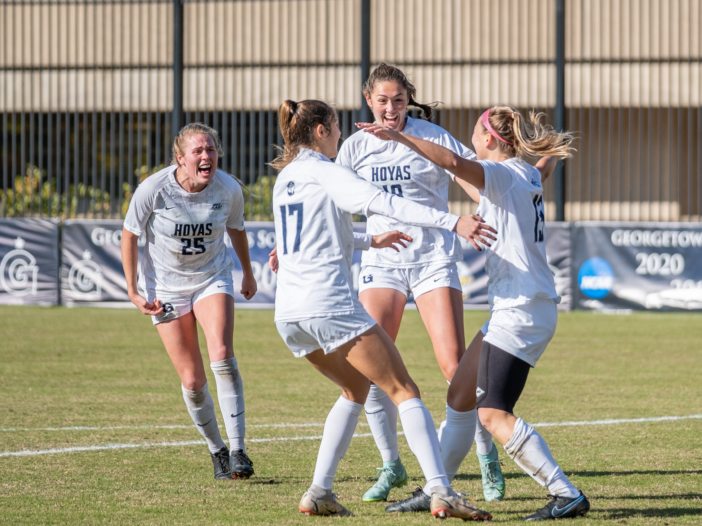 The No. 2 Georgetown University women’s soccer team defeated the Central Connecticut State University Blue Devils 6-0 in the first round of the NCAA tournament on Saturday.

In the second minute, the Hoyas took the first shot of the game courtesy of graduate defender Sydney Cummings. Her attempt was followed by two shots from junior midfielder Julia Leas, including one which forced Blue Devil goalkeeper Amanda McQuillan to make her first save of the day.

Central Connecticut responded to the pressure and took its first shot of the game in the 16th minute. The ball was headed towards the top left corner of the goal but Georgetown junior goalkeeper Allie Augur made the save.

The Blue Devils did not manage to take another shot in the first period. The period ended with a score of 0-0. The Hoyas had taken eight shots to Central Connecticut’s one.

The game picked up in the second period. In the 55th minute, Central Connecticut forward Kristina Kelly fouled Leas. Senior midfielder Maya Fernandez-Powell took the free kick and curled the ball into the penalty area to find graduate defender Kelly Ann Livingstone. The ball bounced off her chest and into the far corner of the goal, putting the Hoyas in the lead with a score of 1-0.

The Hoyas got their second goal in the 62nd minute. Fernandez-Powell passed from the middle of Central Connecticut’s half to graduate midfielder Daisy Cleverley, far from the goal. Cleverley took a touch to control the ball, looked up at the goal and fired the ball with her left foot. The ball went flying into the top right corner with such accuracy and pace that the Central Connecticut goalkeeper had no chance of saving it.

The Hoyas seemed more in control of the game now with their two-goal lead. Central Connecticut did manage to take a shot on target to slightly break the Hoyas’ momentum but its attempt did not trouble Augur.

Georgetown’s next attempt on goal came in the 69th minute. First-year defender Cyanne Doyle played a through ball to junior forward Gia Vicari on the right side of the Central Connecticut penalty area. Vicari dribbled past a defender and kicked the ball into the box with her left foot. The ball deflected off a Central Connecticut defender and fell for Leas in the penalty box. Leas swiftly shot the ball towards the bottom left-hand corner of the goal and scored.

Once Georgetown had a three-goal advantage, Head Coach Dave Nolan made several substitutions for the Hoyas. The Hoyas kept possession of the ball.

In the 77th minute, Vicari intercepted the ball from a Central Connecticut midfielder. Vicari dribbled the ball towards the goal and passed the ball to Leas, who took a touch towards the edge of the penalty box and took a long-range shot with her left foot into the top right corner of the goal. This marked Leas’ second goal of the game and Georgetown’s fourth.

The Hoyas’ fifth goal came just a minute after the fourth. Leas was involved in the play once again. She dribbled the ball down the middle of the field and sent a through ball in for junior forward Sofie Fox. Fox, now one-on-one with the Central Connecticut goalkeeper, found the back of the net. The Hoyas were leading 5-0.

In the 81st minute, Georgetown senior defender Jenna Royson crossed the ball into the penalty box from the left hand flank. First-year forward Erika Harwood ran towards the ball and managed to get a lot of power behind the header. Once again, the Hoyas scored to make it 6-0.

The game ended with the score of 6-0 in favor of Georgetown. The Hoyas had taken a total of 18 shots by the end of the second half while Central Connecticut had only taken three.

The Hoyas will now advance to the second round of the NCAA tournament. They will face the defending national champion Santa Clara University Broncos (12-5-2, 8-1-0 West Coast) on Friday, Nov. 19 at Shaw Field.