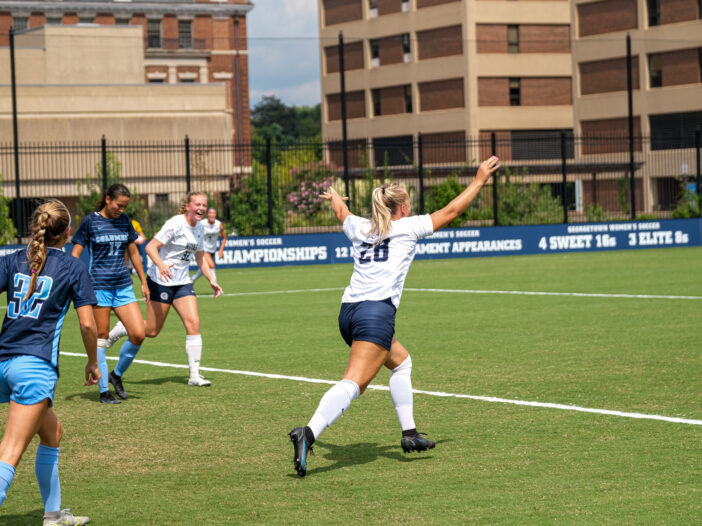 The No. 14 Georgetown women’s soccer team took down the Columbia Lions 2-0, breaking a two-week winless streak that had been in effect since the Hoyas’ Aug. 21 home opener. Graduate forward Boo Jackson led the charge for the Hoyas, scoring a goal in her first game back following an injury that prematurely ended her 2021 season.

Hoyas senior forward Gia Vicari made the Lions (1-1-1) nervous early, getting a shot on goal just minutes into the game. Vicari’s shot marked the beginning of a long day for Columbia’s goalies, Paige Nurkin and Liz Matei, who, like they have all season, each played one half. The two saved three of Georgetown’s five shots on goal. In the other net, Hoyas first-year goalkeeper Cara Martin pitched a shutout. Thanks to those efforts versus the Lions and her performance in Georgetown’s earlier draw with the University of Maryland Terrapins (1-0-4), Martin was awarded Big East Goalkeeper of the Week honors. The rising star has yet to allow more than six goals this season despite facing three top 25 opponents.

On the offensive end, the Hoyas struggled to find the back of the net until Head Coach Dave Nolan brought Jackson onto the field.

Although the Hoyas (2-1-3) did not score until the 34th minute, Head Coach Dave Nolan told Georgetown Athletics that they controlled the game from the onset.

“Both teams probed for advantages early on, and while we were never comfortable on the scoreboard, we were always in control with the exception of a few counterattacks by them,” Nolan said following the game.

Nolan also singled out Jackson’s efforts, praising her return to the field following her injury.

“It looked like we were going into the break scoreless but with her first touch of the ball, in her first game in nearly a year we had to thank Boo Jackson for bravely getting on the end of a cross for the lead,” Nolan said. “It certainly gave the team a lift and it was great to see Boo back on the field after some tough injuries.”

Jackson’s goal — which was assisted by sophomore midfielders Eliza Turner and Maja Lardner — came just 28 seconds after she was substituted in for Vicari.

The second half was similarly dominated by the Hoyas, though the score shows a closer game than reality. The Lions were only able to get four shots off, with only one on target. Hoyas first-year forward Natalie Means logged five shots on her own.

After 18 shotless minutes, Lardner began to knock on the door with a strong offensive drive. Five minutes later, she found the back of the net to widen Georgetown’s lead to 2-0.

Nolan said Lardner helped the team come back in the second half.

“The second half was more of the same until Maja Lardner made a sheer hustle play to grab us a second goal and help us breathe easier,” Nolan said.

The Hoyas remained in control after Lardner’s goal, rattling off a few more shots. Columbia was not able to get any shots off in the final 30 minutes of the game.

The win will give Georgetown some fond memories as they head into an extended break thanks to their bye on Thursday. Following that, the team will look to build on their success as they take on the William and Mary Tribe (2-3-1) on Sunday, Sept. 11 at 1 p.m. on Shaw Field. The Tribe will enter the match after playing the American Eagles (1-1-3) to a draw Sunday, Sept. 4. Students can enter for free, but all other attendees can purchase tickets at wearegeorgetown.com.

The match against William and Mary will be their penultimate game before the Big East conference play begins on Thursday, Sept. 22. In that game, the Hoyas will take on St. John’s (3-1-2) in a home match that will be played at the Maryland Soccerplex.