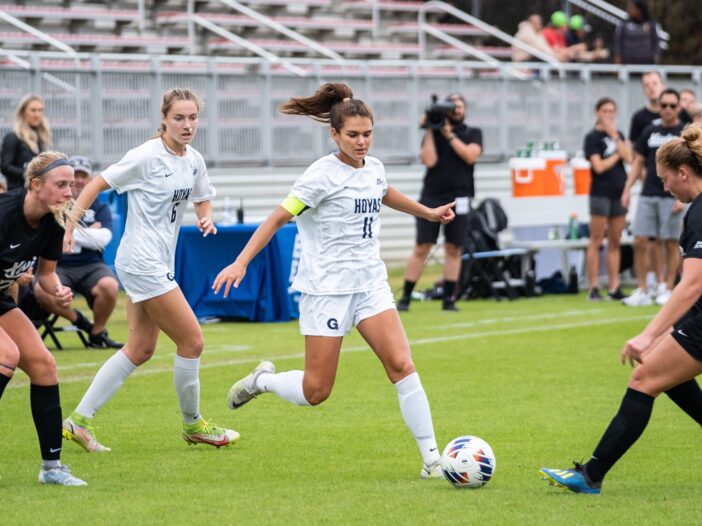 As the announcer began his countdown from 10 to conclude the Big East Championship between Georgetown University and Xavier University, the Hoyas’ sideline was euphoric. When the clock hit zero, the victorious Georgetown bench stormed the soaked field at the Maryland SoccerPlex while the coaching staff embraced.

The goal by junior midfielder Tatum Lenain ended up making the difference as the Hoyas (14-1-5, 8-0-2 Big East) won the tense, chippy match 1-0 over the Xavier Musketeers (13-3-5, 6-1-4 Big East) to clinch their third consecutive Big East Championship and sixth title in the last seven seasons. Although both teams came into the championship match fired up, their respective defenses were able to control the game for much of the first half.

The first shot on net did not come until the 19th minute of play, when Xavier goalkeeper Maria Galley easily stopped a grounder from Georgetown sophomore midfielder Claire Manning. The Musketeers had their own offensive opportunities, but their most promising chance ended with a header skied over the top of the net around the 22nd minute.

The game began to get chippy 25 minutes in, when Georgetown senior forward Gia Vicari collided with Galley. Despite Xavier Head Coach Nate Lie’s pleas to the referee for a yellow, no penalty was issued.

Georgetown’s best opportunity of the half came in the final minute, when an untimely Xavier foul allowed for a free kick with 23 seconds remaining. The kick sailed over the net, but the Hoyas finished the half with strong momentum.

Despite the scoreless tie at halftime, Georgetown fans remained optimistic.

“The energy is really good,” said Marshall Whitmer, a sophomore in Georgetown College. “I know they’re playing hard, I know we’re cheering hard, so let’s hope for a good second half.”

“I think the Hoyas are gonna win,” added Matt Sapienza, a sophomore in the McDonough School of Business.

However, Xavier came roaring out of the gates in the first minute of the second half. A great slide tackle from Georgetown senior midfielder Julia Leas was all that held off the Musketeers from having a one-on-one with the Hoyas’ senior goalkeeper Allie Augur. However, Georgetown quickly rebounded.

13 minutes into the second half, a cross from sophomore forward Maja Lardner of the Hoyas leaked through the Musketeer defense straight to junior midfielder Tatum Lenain. Lenain tapped the ball once, then delivered a strike straight to the back right post, never affording Xavier goalkeeper Galley the chance to save it. The Hoya sideline exploded in jubilation, and Head Coach Dave Nolan let out a cheer that echoed through the stadium.

In a postgame interview with Georgetown Athletics, Nolan said the wind impacted the Hoya’s strategy after the first half.

“The wind was actually a big issue in the first half,” Nolan told Georgetown Athletics. “We changed our system, went with three up top instead of two, tried to pen them in, pen them back in their half which I thought made a difference. I didn’t really feel they ever got out in the second half.”

After Lenain’s beautiful strike, the Hoyas were able to control possession and limit the Musketeers’ opportunities. Though a costly penalty in the 23rd minute almost doomed Georgetown, the team’s defense stopped a quality Xavier shot to preserve the Hoyas’ narrow lead.

With 12 minutes to go, the rain that had been constantly threatening finally broke loose and soaked the field. The wet conditions did not help the already struggling Xavier offense, and they were unable to generate a single good shot attempt over the last 10 minutes of play. Overall, both offenses were limited in the game, with only 3 shots on net between the two teams.

With the win, the Hoyas clinched their spot in the postseason and were named as a fifth seed in the NCAA tournament. They took down Hofstra University at Shaw Field on Nov. 12 in the first round, setting them up for a second-round bout next weekend.

Following the first-round match, Nolan said his eyes are set on the rest of the tournament.

“We played well enough to win it by more than one, and we had chances to get more than one but couldn’t quite get the second goal to kill the game,” Nolan told Georgetown Athletics. “At this stage, it is all about moving on to Tallahassee. That’s our focus for now.”