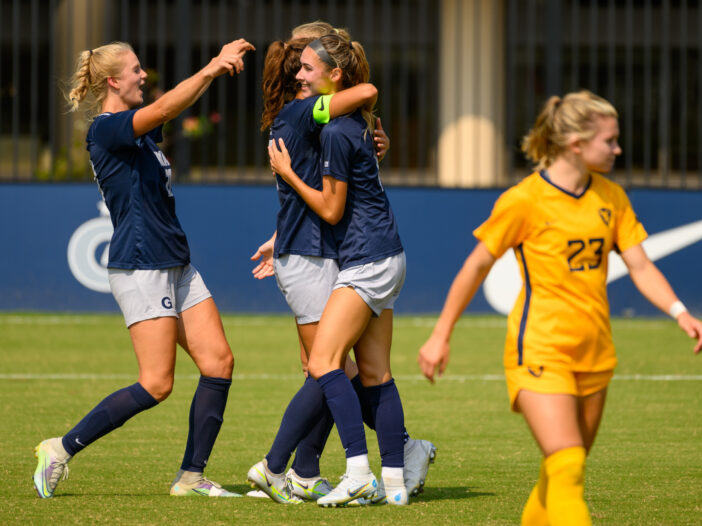 Both teams jockeyed for control in the early stages of the match, but neither team was able to make an immediate impact. At the 15-minute mark, both the Hoyas (4-1-3) and the Mountaineers (3-3-3) had each registered just one shot on goal. Junior midfielder Erin Martin’s calm distribution allowed her to serve as the metronome of Georgetown’s offense.

Brendan Foody (MSB ’25), a Georgetown soccer fan who attended the game, told The Hoya, “Her swift passing skills had a huge impact on the back and forth in the middle of the field.”

The next 18 minutes were tense as both teams battled to maintain possession but rarely troubled the opposing goalkeeper. From 14:07 to 33:34, neither team produced a shot. In minute 33, however, the Hoyas finally broke the deadlock, as Lenain scored off a pass from sophomore forward Maja Lardner to give Georgetown the lead, 1-0.

In the final 12 minutes of the half, West Virginia appeared more threatening, as they attempted 3 shots on goal — one of which was saved by Georgetown first-year goalkeeper Cara Martin — to Georgetown’s 0. In the dying moments of the first half, the Mountaineers earned a free kick just outside the 18-yard box, but they were unable to score as time expired, preserving the Hoyas’ lead of 1-0 at halftime.

From the start of the second half, the Hoyas took the initiative, determined to double their advantage. Within two minutes of the restart, Lenain had already forced a save out of West Virginia goalkeeper Kayza Massey on one shot and narrowly missed the goal on her second. In the 48th minute, four minutes into the second half, Vicari rifled a shot into the upper right corner to put the Hoyas up, 2-0. The goal was Vicari’s third of the season and 22nd of her stellar collegiate career.

The Mountaineers struggled to regain their footing in the game. The Hoya defense, anchored by senior Julia Leas, stood its ground and rarely gave the Mountaineers any chances to score. After the second goal, the Mountaineers took nine shots, of which only two were on target.

Head Coach David Nolan was proud of his team’s offensive and defensive performance against the Mountaineers.

“Saturday’s victory over West Virginia was our most complete performance of the season,” Nolan said in an interview with The Hoya. “We attacked well and always looked like we could score goals, a great finish by Tatum and what I call a ‘Dirty Goal’ by Gia was the least we deserved.”

Nolan was also proud of the pressure his squad put on the Mountaineers, specifically singling out Leas.

“Except for a 10-minute spell in the second half, I thought our back line did a tremendous job. Julia Leas in particular was exceptional. However, the energy of our wide midfielders and work rate of our center mids was the biggest difference between the teams. I am very proud of the team’s effort,” Nolan said.

The Hoyas kick off conference play Sept. 22 at 7 p.m. against St. John’s University (3-2-3). The game will take place at the Maryland SoccerPlex and will be broadcast live on FS1.

Nolan said the team will need to put in its best effort to thwart any threat that St. John’s poses to the Hoyas’ recent streak of dominance.

“We had a real scrap versus St. John’s in the conference final last year. They are a dangerous team who are very well coached. We will definitely need a similar effort to last Saturday if we are to be successful.”