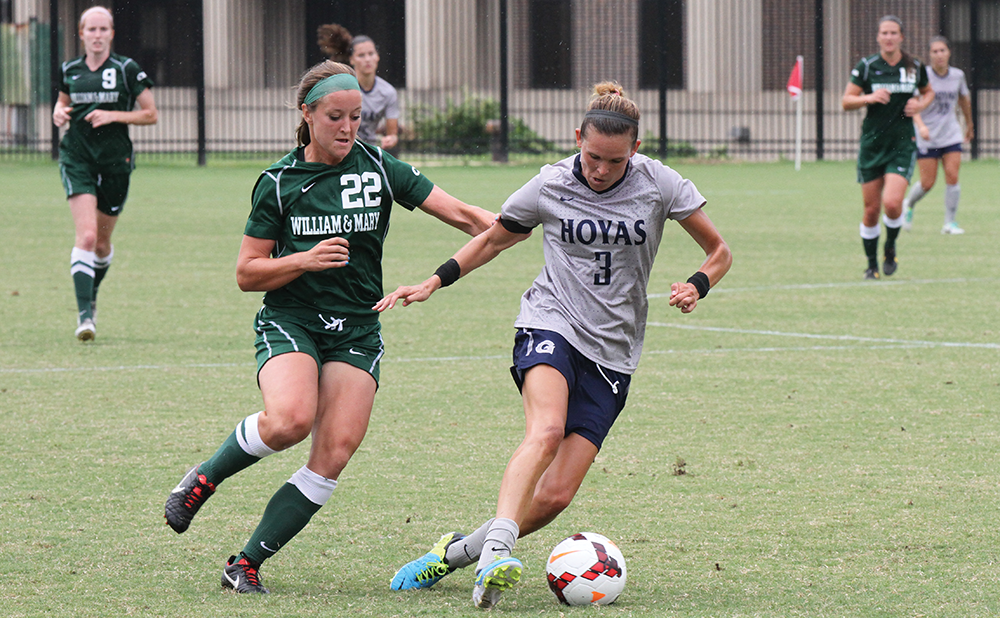 Last December, while most Georgetown students toiled away in Lau studying for finals, senior defender Emily Menges was in a far more pleasant place: Sunrise, Fla. But this was no leisurely vacation; Menges — along with junior midfielder Daphne Corboz — was in town to train with the Under-23 U.S. Women’s National Soccer Team.

It was the culmination of a whirlwind season for Menges. The centerback captained Georgetown’s women’s soccer team to the second round of the NCAA tournament and its highest national ranking in program history, earning a Big East Defensive Player of the Year award, a first-team All-American spot and a place on the national team. But if all turns out the way she hopes, things might just be getting started. Portland Thorns FC selected the senior in the third round of the National Women’s Soccer League draft on Jan. 17.

The U.S. team’s camp in December was the first time Menges had trained with the national program, a rare occurrence in an era where U.S. Soccer fields teams in age groups as young as under-15.

“It was kind of weird going in where everyone knew each other,” Menges said. “I didn’t know what to expect, and I’ve never played at that level before. These are the best players in the country — it’s a whole different environment.”

For Menges, the differences were most evident in the intensity of the players who — though technically her teammates — were also competing for a limited number of roster spots.

“It’s cutthroat,” Menges said. “At practice on the Georgetown team, you don’t want to hurt people. I got the feeling that at the U-23 camp, people are going to be way more aggressive. They’re going to want to earn their spot, and that’s just something I’m going to have to get used to.”

Despite the adjustment period, Menges found the camp helpful. U-23 National Team Head Coach Steve Swanson met with her for a debriefing at the end of the week and emphasized that the Long Island native needed to work on developing her first touch. Swanson is also head coach at the University of Virginia, the team that eliminated the Hoyas from the NCAA tournament last November.

So it wasn’t until after returning from Florida and taking some time to enjoy the holidays that Menges turned her attention to the NWSL.

The National Women’s Soccer League, which stretches from Boston to Seattle, played its inaugural season last year. It was established following the failure of two previous leagues — the Women’s United Soccer Association and Women’s Professional Soccer. Eight teams competed in the league last year, and an expansion team is scheduled to begin play in Houston this season.

“This league has attracted the best players in North America and some of the world’s finest, making it the strongest women’s league in the world,” Georgetown Head Coach Dave Nolan wrote in an email.

Despite knowing that the Washington Spirit — the local NWSL club — had scouted her throughout her senior season, Menges didn’t spend much time thinking about where she would end up until the days before the draft.

“The week before the draft, Dave reached out to the coaches to see where people’s heads were at and what was going on,” Menges said. “He gave me a good idea of when I was going to get drafted and where.”

Menges attended the draft in Philadelphia with her father. She had been named a first-team All-American the previous day but was now left to wait in order to find out where the next stop in her career would be.

“It was a cool experience, but [it] was stressful,” Menges said. “It was extended over a couple of hours, and it was a lot of stress having a bunch of people [get drafted] and then a gap.”

That there was any gap at all between the top picks and Menges was due to her decision to remain at Georgetown until graduating with a psychology degree in May. Though she’ll miss around two months at the beginning of the season, it was an easy choice to make for the senior.

“A lot of girls either graduate early or put it off until next year,” Menges said. “I didn’t want to be one to put it off, and Georgetown doesn’t offer online classes, which is what some of the other girls do.”

A few hours after her childhood friend Crystal Dunn was taken first overall by the Spirit, Menges finally received word that Portland Thorns FC had selected her with the 25th pick. It was exactly the news that the senior had been waiting to hear.

“I couldn’t have asked for a better place to go,” Menges said.

Thorns FC is affiliated with the Portland Timbers of Major League Soccer. In addition to the first-rate facilities that come with the MLS connection, Portland boasts a first-rate roster. The club won the inaugural Women’s National Soccer League Championship last year and is home to U.S. national team players Rachel Van Hollebeke and Alex Morgan. For Menges, the opportunity to play with Van Hollebeke — the starting centerback on the national team — is a dream come true.

“It’ll be kind of surreal at first. She’s the best centerback in the world,” Menges said. “I talked to [Thorns Head Coach Paul Riley] and he said that I would learn so much from her. So as long as she’s willing to teach me, it’ll be great to work with her.”

“We’re not going to just have parents and closest friends anymore,” Menges said, laughing. “I don’t think I can even wrap my head around it yet. I’ve never been in that kind of environment.”

However, Menges knows she has a long way to go before she gets the chance to play in front of the big crowds and bright lights. In addition to focusing on finishing up her degree this semester, Menges will have to prepare for the week of preseason training that she’ll attend over spring break. Her spot on the Thorns’ roster is not guaranteed, and it is vital in proving to the coaching staff that she belongs.

“I have to take it one step at a time,” Menges said. “I have to make the team. I’ll have to work harder than I’ve ever had to work in order to keep up with the pace. I hope to go in and get some playing time. After that, we’ll see.”

It’s difficult to predict where Menges will end up, as women’s professional soccer is a tough and unpredictable field. But one thing is certain: If she can perform like she has in four years on the Hilltop, a long and fruitful career awaits.