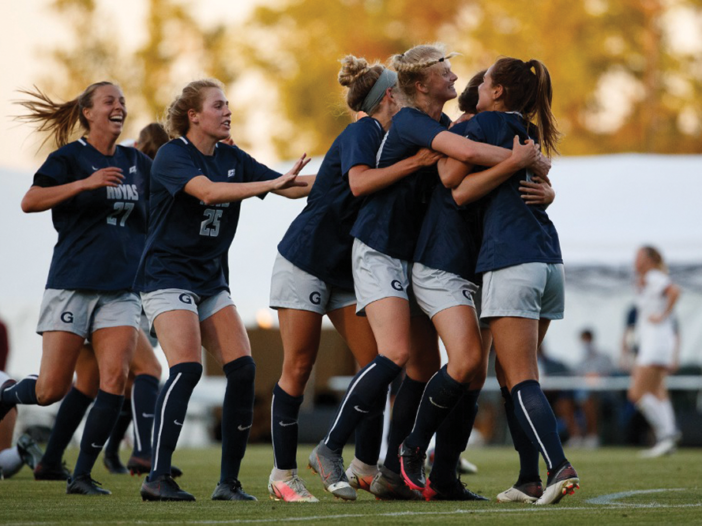 In the final minute of regulation, the defensive contest between the No. 13 Georgetown women’s soccer team and the South Carolina Gamecocks seemed destined to bleed into overtime. Yet senior forward Jenna Menta willed the Hoyas to a win in regulation, finding the back of the net with 52 seconds remaining and propelling the Hoyas to a 1-0 victory and a spot in the third round of the NCAA Tournament.

Throughout the first half of the game, held in Wilson, N.C., neither Georgetown (11-0-1, 7-0-1 Big East) nor South Carolina (11-5-0, 6-2-0 SEC) was able to create frequent offensive opportunities. Despite a few looks in front of the goal for the Hoyas, including a free kick from junior midfielder Maya Fernandez-Powell, both sides remained scoreless at the half.

The Gamecocks returned from halftime with renewed intensity. After Georgetown senior defender Kelly Ann Livingstone tripped a South Carolina forward in the penalty box, the Gamecocks were awarded a penalty kick. South Carolina’s hopes of jumping to a 1-0 lead, however, were dashed when graduate goalkeeper Lauren Gallagher dove right and saved the shot by midfielder Claire Griffiths.

This was not the first time Gallagher delivered in a high-pressure situation, according to Georgetown Head Coach Dave Nolan

“Lauren’s been in this position before,” Nolan said in an interview with The Hoya. “She saved a penalty kick in the College Cup in 2018. She’s two-for-two with penalty kick saves in the state of North Carolina.”

Gallagher’s save, combined with a solid first half in goal by senior Alyssa Navarette, helped the Hoyas’ tandem add another clean sheet to their tally. Entering the match, Georgetown was tied for the highest shutout percentage in the nation, boasting nine shutouts across 12 games. The clean sheet in the win over the Gamecocks marked the Hoyas’ 10th shutout of the season.

Georgetown’s defense of stable center backs and aggressive outside backs complicated South Carolina’s efforts to establish a pattern of attack, according to Nolan.

“We have two very good athletes on the outsides who, because of their attacking nature, help keep the other team on their back foot,” Nolan said. “When you’ve got that foundation, it helps a lot.”

As the game clock kept ticking, the Hoyas had trouble finding a way to move the ball past Gamecocks goalkeeper Taylor Fox. Similarly, South Carolina failed to penetrate the Georgetown defense. The Hoyas outshot the Gamecocks 8-3 on the day, and both teams earned four corner kicks yet converted no corner kicks into a goal.

With overtime looming, Menta picked up the ball in Georgetown’s 18-yard box and began a 70-yard sprint down the pitch. Cutting in from the sideline and beating several South Carolina defenders one-on-one, Menta fired a rocket shot off the dribble. The shot slid past a diving Fox and into the bottom right corner of the net with less than a minute remaining in regulation.

Menta’s score went unanswered by South Carolina in the final minute, and Georgetown punched its ticket to the NCAA Tournament Sweet 16. The Hoyas will face a tough contest from No. 4 TCU, which bested New Mexico 6-2 in the second round.

Though the competition is bound to be intense, Nolan recognized his team’s prowess moving into the Sweet 16.

“We’ve taken the approach from day one of, every practice and every game, enjoying it like it could be our last because of the COVID world we live in,” Nolan said. “It’s gotten us to this point now. We’ll be looking to give it our best shot. TCU is a very good team, but so are we.”

The Hoyas will next lace up their cleats on Wednesday, May 5, to play the Horned Frogs in the third round of the NCAA tournament. The match will kick off at 6 p.m. in Cary, N.C.