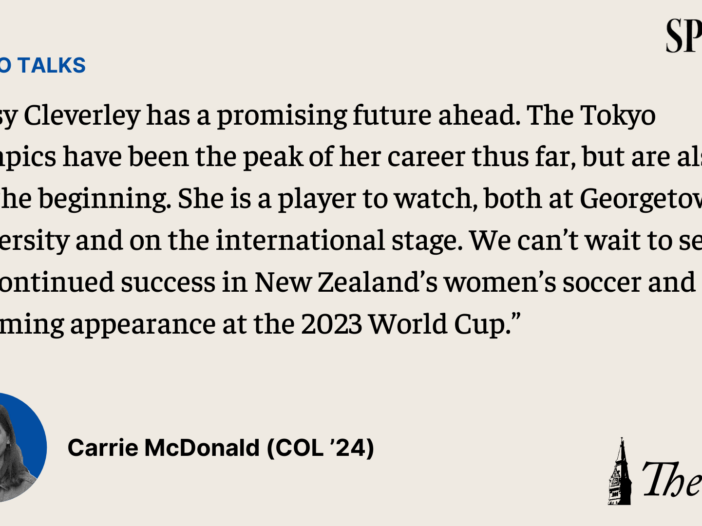 Georgetown graduate student, reigning Big East Midfielder of the Year and New Zealand international soccer player Daisy Cleverley made Georgetown proud as she stepped onto the Olympic field for the first time in the women’s soccer group stages.

Even though New Zealand lost all three of its group matches against Australia, the United States and Sweden, Cleverley gained invaluable experience playing against some of the best talent in the world.

At just 24 years old, Cleverley’s recent Olympic debut was the culmination of years of hard work, dedication and tenacity. In 2014, she made her debut with New Zealand’s senior national team and has since then racked up 12 international caps. Thus far, Cleverly’s Olympic debut has been the highlight of her young career. Her debut also served as a turning point, helping her solidify a spot on the national team in advance of the 2023 FIFA Women’s World Cup in Australia and New Zealand. The Hoya had the opportunity to interview Cleverley on Zoom regarding her experience at the Olympics and her hopes for the future.

Responses have been edited for both clarity and length.

What was your journey to the Olympic Games like?

“I’ve been in the New Zealand national team since I was 17. I’ve been fortunate enough to be able to go to the Canada World Cup, then the France World Cup and to experience Rio as an alternate. That experience was amazing and helped me grow as a player and ultimately play at the Tokyo Olympics.”

How did you prepare for the games?

“I went back home after finishing the season at Georgetown in May, quarantined there and then we had a three-week camp. I was on the cusp of selection, so this camp meant a whole lot so that the coach could see me play. And then obviously it went well, I got selected in the 18-women-squad, which was so exciting. And then I went to Tokyo, which was an amazing experience, and I think has been the peak of my career as of now.”

What would you consider your most significant challenge and how did you overcome it?

“I actually tore my ACL during my second season when I did my undergrad at Berkeley. That was a big obstacle because I ended up missing a lot of tours for New Zealand, but then it actually ended up working well. I managed to get a nice break from football. I hadn’t had one for years. So that worked out and it sounds cliche, but I came back stronger, and mentally stronger as well. Another big setback, I think, which honestly could be even more than an injury, is not getting selected. When I was younger, I was a solid player. I would always make the squads and then I didn’t make a squad to Brazil one time and it was a bit of a shock at the time. So that was a big setback that honestly has helped me now. I can never expect to get selected; you always have to work for that.”

What was your favorite thing about your Olympic experience?

“Honestly, this experience was the peak of my career. Experiencing the World Cup was amazing, Rio was great, but this put all the other bits to shame because the Japanese put on a great show. You’re seeing all these athletes, huge people, muscly and tall, and they made me feel like an amateur. Just being around everything in the whole atmosphere of the village was amazing.”

What was the most challenging aspect of participating in the Olympics?

“I think the biggest challenge, especially for our team, was that we hadn’t even seen each other for over a year and a half. I think we really needed that game time. It showed in the games against Australia, the United States and Sweden that we didn’t have the same experiences as the United States and others, who had camps before this event. I think that really affected our team, but we’re hoping that with the World Cup in 2023 things will change, and we can actually get more contact time with each other.”

How did you manage all the emotions that came with playing at the Olympics?

“It was funny, because the first game I got 20 minutes on at the end of the game and then the coaches told me I would be starting against the United States in the next game. I called my mom and I just started crying. We both cried. It was so, so exciting. I had just been in the team for so long and then I finally got my first start at an Olympic event. That emotional side was obviously pretty high. I obviously was nervous going into these games but surprisingly not that nervous. I think there was very little expectation around myself and New Zealand itself. So I think I was able to bring myself to grab it all and just be like, ‘You know, it’s fine, you’re at the Olympics, soak it all in while you can and forget about what doesn’t matter.’”

Do you have any advice or a message for young athletes who dream about going to the Olympics one day?

“I think the biggest thing is knowing that your sports journey is going to be a huge rollercoaster. You’re going to have roadblocks on the way, from injuries, to having to sacrifice going out with friends, not getting selected for teams, waking up early and all that kind of thing. Stick at it. I mean, I’ve only had about 10 caps prior to this tournament over however many years and I think by sticking at it and knowing that your time will come is incredibly important. There are going to be lows, but know that the highs are really high, and it’s worth it at the end of the day.”

Is there something specific from the Olympics that you learned that you can apply to Georgetown’s upcoming season?

“I think I need to use my experience from the Olympics and help bring that to the Georgetown team. Coming into this Olympics, I wasn’t expecting much game time, let alone a starting position. So when I did have my chances when we played Great Britain beforehand and when I got on against Australia, I used my chances to show the coaches that I can play and so I think that really helped me get the starting position that I obviously really wanted. Bringing that to the Georgetown team and helping players to do the same will be really important. Every moment you get on that field, work as hard as you can, work for the team and you’ll soon get the rewards of starting.”

What are your plans for the future, especially considering that the next World Cup will be at home?

“Having your own home World Cup is so special. I don’t think you can beat that feeling of being able to play in front of your family and friends — especially during COVID-19 I haven’t been able to do that for a very long time. I want to keep playing after college to put myself in the best position to make that squad. It’s hard to say at this point, but the women’s game is growing everywhere now. It is exciting to see women being able to make a living, although it may not be much, and it should be more. But they’re still able to sustain themselves and it’s moving in the right direction.”

What impact do you think the 2023 World Cup will have on both the future of the team and women’s football in New Zealand?

“I think they wanted to have the World Cup in New Zealand to grow the game and I think it will have huge effects on girls wanting to play football in New Zealand, especially if they’re able to see games and see us play. It’s more attainable when you’re able to see women playing the game that they love. The game is growing, year in and year out. I think using this opportunity is going to be incredibly important. The depth we create and the development of young players coming through is going to be incredibly important. As for the future of the team, I’m living in America and I feel more removed from the development of players happening in New Zealand but I’m really hopeful that it’s strong. I think now that they’re encouraging players to go overseas and get that professional experience, it’s helping players who are coming into the squad to perform at a high level because they’re used to that professional environment.”

Cleverley has a promising future ahead. The Tokyo Olympics have been the peak of her career thus far, but are also just the beginning. She is a player to watch, both at Georgetown and on the international stage. We can’t wait to see her continued success in New Zealand’s women’s soccer and her upcoming appearance at the 2023 World Cup.