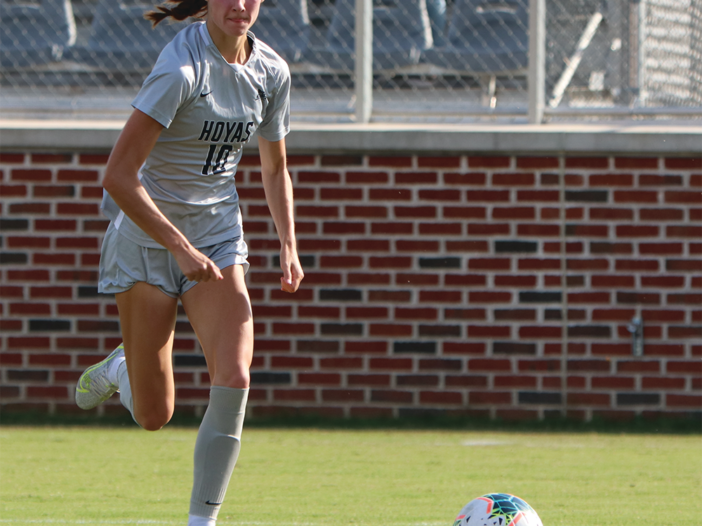 The Georgetown women’s soccer team continued its undefeated season by defeating the St. John’s University Red Storm on Sunday, Oct. 10. With the road victory, the Hoyas extended their unbeaten streak to 14 games this regular season.

Even before the opening kickoff, the rain and heavy wind made it clear the match would be a gritty, low-scoring game. However, neither team has been a stranger to close games recently.  Four out the last five games for Georgetown (8-0-6, 4-0-2 Big East) and the last three games for St. John’s (6-4-2, 2-2-1 Big East) were decided by one goal or less.

Both teams spent the beginning of the first half getting a feel for one another, as this was their first meeting of the season. Neither side was able to dominate possession, with both teams trading shots to start the match. The first scoring opportunity came for the Red Storm in the ninth minute when forward Zsani Kajan, who leads the Big East in goals this season, ripped a shot on goal. However, Georgetown junior goalkeeper Allie Augur leapt to her right and tipped the ball out of harm’s way. The save was the first of Augur’s three saves during her spectacular afternoon shutout, resulting in her being awarded Big East Goalkeeper of the Week.

Despite the initial scare, the Hoyas quickly responded with offensive pressure of their own. Although Georgetown recorded three of its twelve corner kicks in a five minute span, the team could only unleash one shot on goal. First-year defender Cyanne Doyle’s shot was easily saved by the Red Storm goalkeeper in the 25th minute, keeping the score tied at 0-0.

The best scoring opportunity of the game for St. John’s came in the 32nd minute of the first half. Following a series of passes, Red Storm midfielder Grace Bernardi struck a long, powerful shot on net. However, Augur made her second diving save of the half, leaping to her right and preventing a Red Storm goal.

With the score tied 0-0 at halftime, Georgetown Head Coach Dave Nolan made five substitutions in an attempt to jump-start the Hoya offense. Nolan’s adjustments proved valuable as the Hoyas started the second half with three corner kicks and a shot in the first seven minutes.

Georgetown finally opened up a 1-0 lead in the 52nd minute off junior forward Gia Vicari’s eighth goal of the season. Following a chaotic scramble and failed clearance attempt off the Hoya’s ninth corner kick of the game, Vicari slipped what proved to be the game-winning goal past the Red Storm defense to give the Hoyas the lead.

In the 71st minute, Vicari almost scored her second goal to give Georgetown a commanding 2-0 lead. However, her shot on goal was saved over the net to keep the score at 1-0.

With the match waning down to its final minutes, it appeared that St. John’s had an opportunity to even the score at 1-1. Red Storm defender Frederique St.-Jean uncorked a quick shot on goal in the 79th minute, but Augur made her third and final save of the match, tipping the ball over the net and out of play, to ensure Georgetown received the victory.

Beyond Augur’s outstanding goalkeeping, Georgetown graduate defender Sydney Cummings was awarded the Big East Defensive Player of the Week and TopDrawerSoccer’s Player of the Week for her role in shutting down the St. John’s offense. Cummings also scored an 89th minute goal earlier in the week in the Oct. 7 match against Butler that helped secure a 1-0 shutout win for the Hoyas.

Georgetown will look to keep up its momentum as the regular season enters the home stretch. The Hoyas play Marquette (7-6, 3-3 Big East) Thursday, Oct. 21 in Milwaukee, Wis. Georgetown is undefeated in its last eight matchups against the Golden Eagles.