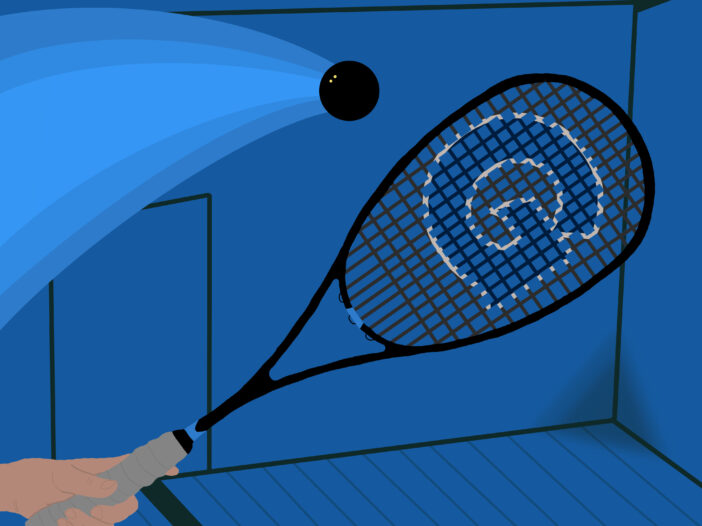 Following a stinging defeat against the top-ranked Bowdoin Polar Bears, Georgetown rallied to pummel Colby in women’s squash. But that decisive win was the lone bright spot in a busy competition weekend that was otherwise lackluster.

The Georgetown (6-6) women’s squash team struggled through a weekend packed with matches, winning only one of three to send the No. 25 Hoyas to 6-6 on the season. The No. 18 Bowdoin (7-6) and No. 21 St. Lawrence (7-3) squads both convincingly defeated Georgetown, leaving the Hoyas to find their lone win on Saturday against the winless No. 27 Colby (0-8).

Georgetown traveled to Annapolis, Md., on Jan. 21 to take on a red-hot Bowdoin team looking to continue their three-game win streak. The Polar Bears extended their dominant run with an 8-1 victory over the Hoyas.

Bowdoin has caught fire late in the season, flipping their losing record into a promising win streak that could translate to success in the Mid-Atlantic Squash Conference Championship. Georgetown was able to steal one point against the Polar Bears, courtesy of graduate Zuha Nazir. Nazir earned a 3-2 victory against Bowdoin’s highest seeded player.

Out for redemption, the Hoyas responded fiercely the next day, traveling to the Arlen Specter U.S. Squash Center in Philadelphia, Pa., to dominate the Colby Mules in a 7-2 rout. Sophomore Caroline Wilcox and junior Sarah Conner won their matches in a 3-0 shutout. Both players had entered the weekend with a team-leading five victories each. Senior Grace Feagin and first-year Nina Flinn also entered the weekend with five wins, and both won their matches against Colby 3-1.

Georgetown looked to maintain that momentum  but ultimately fell short against St. Lawrence. The Hoyas were unable to get onto the scoreboard against the Saints, resulting in a disappointing final score of 0-9. While the Hoyas failed to earn points, Wilcox and Flinn performed impressively, each finally falling to the Saints 2-3.

Both Wilcox and Flinn have consistently produced for the Hoyas this season and are players to watch as the season comes to a close over the next month. Moreover, Flinn is in her first season as a Hoya, and her early success bodes well for the future of Georgetown women’s squash.

Although the Hoyas’ record slipped to 6-6 following this difficult weekend, a winning record is still within reach, with two matches left to play against Haverford and Vassar on Jan. 29.

In the event of a win against Haverford, whom the Hoyas have dominated previously, Georgetown will secure a non-losing record for the regular season. In hopes of securing a trophy at the conference tournament, the Hoyas will have to lean on the production of Wilcox, Feagin, Flinn and Conner to upset competition.