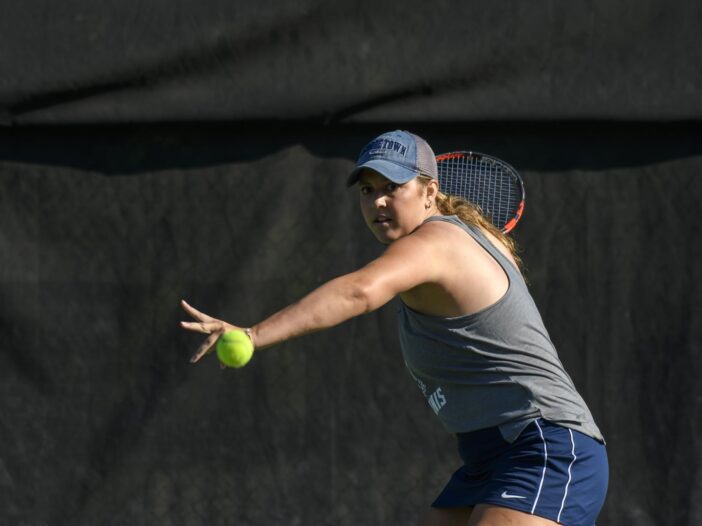 Georgetown women’s tennis secured its first Big East conference win of the season with a decisive 6-1 victory over the Seton Hall Pirates. The Hoyas (5-11, 1-3 Big East) spent the weekend in the tri-state area and rebounded from a hard-fought loss against St. John’s on March 25 in New York.

On March 26, Georgetown traveled to the Murray Hill Tennis and Fitness Center in New Jersey to take on the Pirates (5-9, 0-4 Big East) and closed out its away trip with a win. The Hoyas started the match slowly, losing the doubles point following two 7-5 set losses from the No. 1 and No. 2 doubles pairs.

Still, sophomore Olivia Ashton and senior Brooke Murphy eked out a win in their match 6-4 at third doubles, a match that Head Coach Freddy Mesmer noted as a highlight of the day.

Despite losing the doubles point, Georgetown turned the momentum around in singles, coming out on top in all six positions. The overall match scoreline does not reflect the intensity of the matches, though, as the Hoyas were pushed to three sets at the third, fifth and sixth positions. Despite facing adversity, Georgetown was resilient.

Junior Carmen Aizpurua out-battled her opponent 6-2 in the third set. The Georgetown training program had a great impact on her match fitness, she said.

“My opponent started the match playing very well. I played more aggressively in the second set, which I think helped me start changing the score of the match. I was serving well, which I think helped me build a good start to the points,” Aizpurua told The Hoya after the match. “I was feeling positive for the third set, and I think all the conditioning we have been doing really helped.”

Sophomore Morgan Coburn spoke about the in-match adjustments she made to take control from her opponent as well as her team’s sentiment about the win after she fought back from a set down to ultimately win 6-3 in the third set at six singles.

“The girl I played came out to a strong start and was really using her forehand as a weapon. I was able to mitigate that in the second and third sets by taking her out of her comfort zone and dictating the points a little bit more,” Coburn told The Hoya after her win. “It felt really good to get a Big East win.”

Mesmer is optimistic about what the win means for the rest of the season and hopes to keep building confidence heading into the season’s final matches.

“In singles, our women did a great job of taking care of business and fighting to the very end,” said Mesmer in an interview with The Hoya. “A couple of three-set wins shows our fitness is at a high level, and our team feels comfortable competing for as long as they need to.”

Junior Chloe Bendetti has been another consistent bright spot for the Hoyas. Bendetti rattled off a singles win in three sets, taking the tiebreaker 10-6 against St. John’s in Georgetown’s previous match. She stepped up her game against Seton Hall, winning convincingly in two sets. Bendetti has now won her last three singles two matches, and when they go down to the wire, she becomes even more clutch.

Both for momentum and the team record, getting the first Big East win was huge. The Hoyas have not logged a conference win since the 2019-2020 season, when they went 2-1 in conference matches. With three more Big East matches scheduled, they have a great opportunity to tie that season, at the least.

Up next, the Hoyas will head home to Georgetown Visitation Preparatory School on April 2 to take on Providence College (3-8, 0-1 Big East). The weekend contest will mark the first match of the season at Visitation, and Georgetown is eager to earn a win on its home turf.