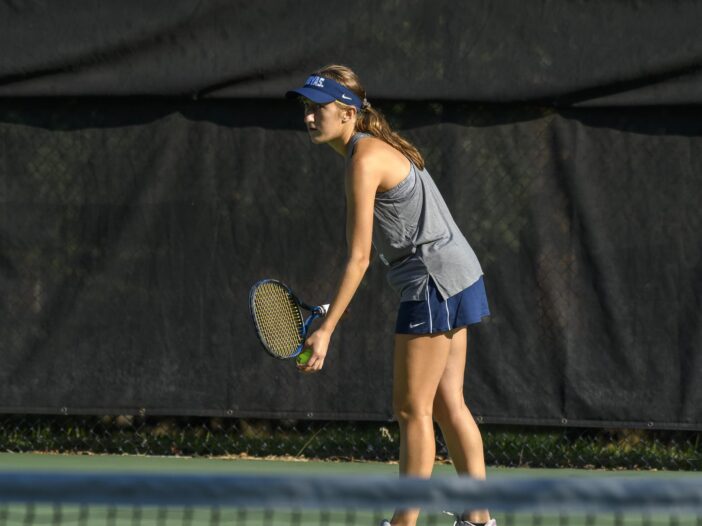 Georgetown University women’s tennis was coming off a definitive 6-1 trouncing of Seton Hall to play the Providence Friars — a team the Hoyas haven’t lost to since 2001. Georgetown (6-12, 2-3 Big East)  continued the hot streak and took all seven matches from the Providence Friars (4-9, 0-2 Big East) April 2, marking their second consecutive victory over a conference opponent.

The two squads converged at Georgetown Visitation Preparatory School for their first meeting in over two years. Like the Hoyas, the Friars also carried a great deal of momentum into the matchup, coming off of a decisive 7-0 win over Bentley University March 31.

But from the moment the two teams took to the court, it was clear that Head Coach Freddy Mesmer’s Hoyas would carry the day. The action got started with three one-set doubles matches, with the contest’s first point promised to whichever side won the majority of the pairings.

This proved little challenge for Georgetown, with the Hoyas cruising to wins in all three matchups. Particularly impressive were sophomores Morgan Coburn and Olivia Ashton, who clobbered Providence’s Vannelie Melendez and Elisa Davalos 6-0.

Their effort marked the first of four shutout sets recorded by the Hoyas that day. The Hoyas were leading 1-0 heading into the six singles matches.

The most lopsided result was posted by junior Carmen Aizpurua, whose 6-1, 6-0 steamrolling of Melendez represented one of the largest total margins of victory by a Georgetown singles player this season.

Sophomore Avantika Willy turned in an equally commanding performance in the number one slot, making light work of the Friars’ Olivia Wright on the way to a 6-1, 6-1 triumph. The straight-sets affair represented Willy’s first conference singles win and lifted her all-time collegiate record to an even 3-3.

Willy’s outing highlighted a Hoya campaign largely paced by underclassmen. Five of the nine matches carried by the Hoyas were secured by first-years and sophomores, signaling a bright future on the Hilltop’s hardcourt.

Sophomores Coburn and Ashton proved as effective working individually as they were together, with Coburn breezing past Lauren Carson 6-2, 6-0 and Ashton outclassing Davalos 6-4, 6-0.

Elsewhere, junior Chloe Bendetti picked up her third singles victory in her last four appearances, outmaneuvering Providence’s Julia Migliorini to take a competitive first set 7-5 before easing to a 6-2 win in the second.

The most hotly contested matchup of the day belonged to the No. 3 singles duel between Georgetown first-year McHaley Ho and Providence junior Katie Mulvey. Although Ho took the first set by a comfortable 6-2 margin, Mulvey managed to fend off her Hoya challenger with a 6-4 rebuttal in the second to extend the match.

With the results of the other singles matches having already clinched a team victory for Georgetown, Ho and Mulvey battled through the third set with pride on the line. The wildest set of the day witnessed a back-and-forth affair that extended for thirty games, finally concluding with a razor-thin 16-14 triumph for Ho.

Her handiwork ensured a final match score of 7-0 in favor of Georgetown, handing the Friars their second shutout loss of 2022.

Still, Georgetown’s results against Providence continue a pattern of success on the home front, with Georgetown having now prevailed in both home matches this season. The 2021-22 squad’s win total has now risen to six, the highest figure in four seasons. With a strong victory led by younger talent, the Georgetown women’s tennis team seems on the rise.

Now, they look back to the Big East as they return to Visitation Prep April 9 to take on the UConn Huskies (8-8, 2-1 Big East).