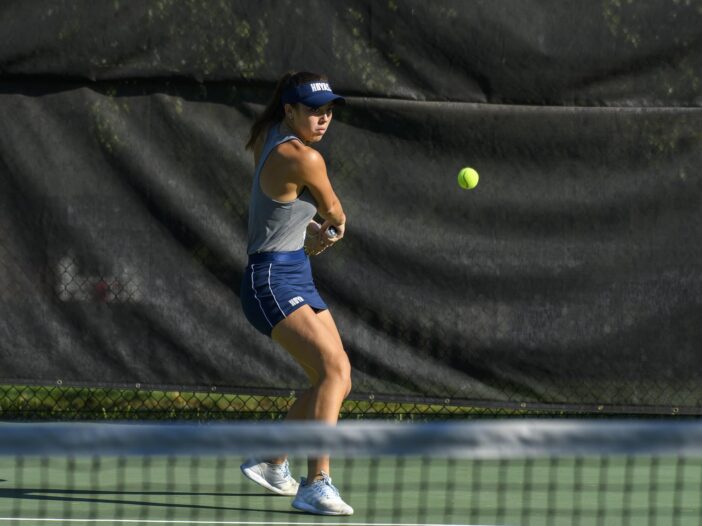 Georgetown women’s tennis won the battle of Washington, D.C. against the George Washington Colonials, continuing their recent hot streak with their fourth win in five matches. On March 19, the Hoyas (4-10) took a short trip across town to face George Washington University (4-6) at the Southeast Tennis and Learning Center and defeated their local rivals 5-2.

Georgetown started the match by securing the crucial doubles point. All three doubles matches were tight with the Hoyas winning 7-6 and 6-4 at second and third doubles, respectively.

Sophomore Avantika Willy took home a doubles win with her partner in fellow sophomore Morgan Coburn. Willy explained how the weather factored into the match, and how they worked together to capitalize on openings during points in an interview with The Hoya.

“Morgan and I adapted well to the conditions as it was pretty windy. We also started out much more aggressive in the first couple of games which is what we’ve been working on in practice,” Willy. “We definitely played smart on important points, especially closing the net on opportunity balls.”

In singles, the Hoyas’ depth and strength were on full display at all positions. Despite falling at first and second singles, Georgetown won its other four singles matches.

At five singles, junior Carmen Aizpurua made quick work of her opponent, winning 6-3, 6-3. Aizpurua also noted the wind as playing a significant role in her match, which she overcame by sticking to the fundamentals and remaining optimistic.

“I played with bigger margins and tried to maintain good footwork to stay as consistent as possible in the windy conditions. I stayed positive throughout the match which definitely helped me win the big points,” Aizpurua told The Hoya.

At six singles, Coburn dominated, beating her opponent 6-2, 6-1. Coburn, who also won her doubles match with Willy, explained how she tried to be versatile during the match.

“I was able to manage my serve well and played consistently off of both sides. I utilized my backhand really well which is my strongest shot and was able to really dictate points with it,” said Coburn.

Assistant Coach David Smith traveled with the team while Head Coach Freddy Mesmer traveled with the men’s team to play Butler University. The teams have both been very welcoming and coachable, according to Smith, which he said made his transition to coaching fulfilling and enjoyable.

“The women’s team has been steadily improving week by week and with each and every match. The match against GW showcased their talent and all the incredible progress they made up to this point,” Smith told The Hoya. “The women have now won four out of their last five dual matches and are looking to make a run at the Big East title in April.”

In practice, the team has been working on dictating the ball to the corners and working the point, according to sophomore Morgan Coburn.

They have also been doing a lot of doubles work, and consequently, the players said that it was a big confidence boost to get the doubles point over strong GW teams. The Hoyas have started to see their hard work on the practice court translate into competition and head into the end of the season with high confidence.

Up next, Georgetown looks to build on its momentum in New York on March 25 against St. John’s University. The Hoyas hope to secure their first Big East win and will end their season with five of their last six matches in conference. Georgetown returns home to Georgetown Visitation to play the Providence Friars on Saturday, April 2nd.