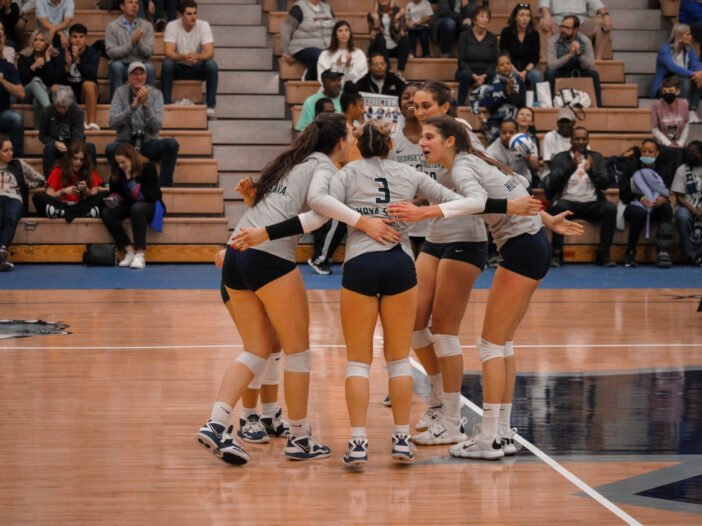 The Hoyas started the first set off strong, recording 3 points, but Creighton stole the momentum with a 9-0 scoring run. Junior middle blocker Chanelle Smith’s powerful spike, sophomore outside hitter Mary Grace Goyena’s 2 critical kills and sophomore libero Karis Park’s ace that grazed the net before falling over kept the team’s hope alive. However, a spike by junior right side hitter Ruth Kayongo hit out of bounds to end the first set, which encapsulated the Hoyas’ performance: while they showed some skill in offensive play, the Bluejays still proved their dominance.

Even though Creighton only had 10 kills to Georgetown’s 8 in the first set, the Bluejays played a much cleaner game and forced multiple errors out of the Hoyas.

The Bluejays carried this momentum into the second set, racking up points and capitalizing on the Hoyas’ mistakes. Smith’s block stopped an early Creighton run from getting out of hand before Creighton regrouped and went on another 13-4 scoring run. When the score was 24-11, luck finally seemed to be on the Hoyas’ side: a spike by middle blocker Smith heading out of bounds grazed a Bluejays player’s hand. Unfortunately, the Hoyas’ brilliant play seemed to be short-lived as Georgetown’s next serve hit the net and marked the second set with a 25-12 loss.

However, Georgetown played with a different energy in the third set. Albeit a slow start, a hyperaware, contorting bump from Park to an empty area of Creighton’s side of the court, a stifling block from middle blocker Brennan Wilhite, and a powerful ace from senior setter Ellie Watkins set the tone for the third set and kept the match close.

In close back-and-forth rallies, a skilled play by Watkins and graduate libero Jessica Cusi to let a seemingly hittable ball go out of bounds followed by kills from Goyena, Smith, Wilhite and Kayongo kept the game within 4 points for the Hoyas.

Goyena stepped up in the clutch once again with two kills. The second kill eluded a potential Creighton block, shrunk the Bluejays’ lead to just 2 and forced a Creighton timeout. To the Hoyas’ disappointment, a Creighton point, a Georgetown error and a block by Creighton’s outside hitter Bethany Clapp and middle blocker Abbey Milner sealed the set and game for the Bluejays.

Although the Hoyas played well to end the game, the Bluejays still had 13 more points in the second set and 5 more in the third set. Head Coach David Heller spoke about the team’s desire to get more kills to finish off the season.

“We have a lot of things we can work on this week in practice,” Heller said in an interview with The Hoya. “Getting kills is number one on the list.”

Despite the disappointing result, Georgetown had multiple solid individual performances. On the offensive side, Goyena led the team with 10 kills while Smith and Wilhite had 5 kills each. Senior setter Emma Plutnicki had 22 assists and 2 blocks, matching Smith. Park also led the team with 10 digs on defense.

With eight games left in the regular season, the Hoyas look at this game against Creighton and their up-and-down season as a period of growth.

Heller said he felt the Hoyas are improving from last season, and are developing well this year.

“We’re up in all of our stat categories from last year, so I think it provides us with a really good blueprint moving forward,” Heller said. “Our floor defense and our blocking have really come along,” Heller said.