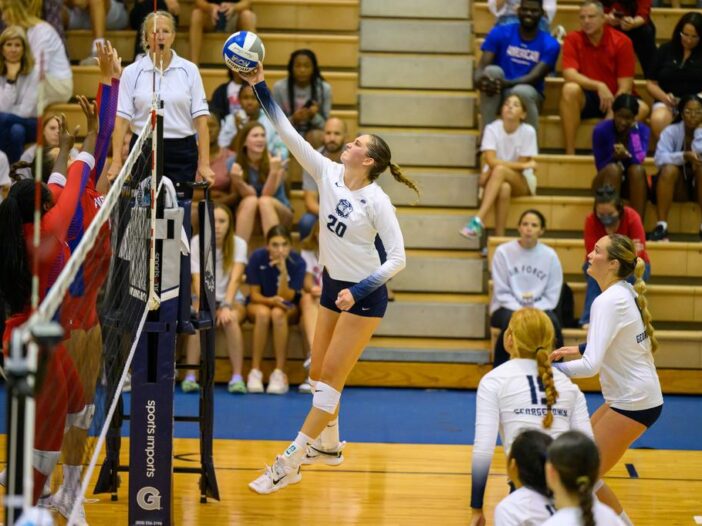 Georgetown women’s volleyball opened their season with three weekend losses, falling to American University, Howard University and the University of New Orleans in the 2022 D.C. Challenge on Aug. 26-27.

Despite gritty fights in each of the matches over the course of two days, the Hoyas (0-3, 0-0 Big East) fell victim to an unfortunate trend of poor early play followed by stifled late-game comebacks.

After finishing with a 7-22 record in 2021, Georgetown entered the new season tied for ninth place out of 11 Big East teams in the Preseason Coaches’ Poll. The team boasted 18 returning players on the roster this season, with only one new addition: first-year middle blocker Vaughan Anoa’i.

The Hoyas also landed another big addition off the court: a brand-new locker room to call home, adding excitement and energy to the team’s already close-knit and experienced community.

Even with so many returners and a newly-renovated space, though, the Hoyas faced tough competition throughout their three matches. They began by taking on the American University Eagles (3-0, 0-0 Patriot League), who received two first-place votes in the Patriot League preseason poll.

The Hoyas started out the game in a tight race with the Eagles, as the set saw 7 lead changes and 15 ties. With the help of two clutch kills from sophomore outside hitter Mary Grace Goyena, the Hoyas were able to come back from a 21-24 deficit and tie the set at 25 points. However, the Eagles finally squelched the late comeback effort, taking the first set 27-25.

After dropping the first set, Georgetown was not able to put together winning momentum. They lost the second set by 8 points and immediately went down 0-6 in the third to a non-relenting American squad. Still, the Hoyas made an impressive team effort to mount a late comeback, closing the gap to 20-24 before the Eagles took the game point.

The second game of the D.C. Challenge on Aug. 27 showed an even closer competition between the Hoyas and the New Orleans Privateers (2-1, 0-0 Southland). After going down early in the first set and dropping it 25-18, Georgetown came back in full force to put together a 7-point run and win the second set 25-20.

But despite double-double performances from sophomore outside hitter Giselle Williams, who finished with 19 kills and 10 digs, and Goyena, who tallied 14 kills and 15 digs, along with an impressive 25 digs on the defensive end from sophomore libero Karis Park, the Hoyas were unable to secure the victory.

The Privateers stole the game in the end, coming out on top and clinching the win 3 games to 1.

After two hard-fought losses, the Hoyas faced their last opponent, the Howard Bison (2-0, 0-0 MEAC), on the evening of Aug. 27. Georgetown came out with high energy in the first two sets, taking the lead in the first half of both, but the team quickly lost momentum from there.

As fatigue set in for the Hoyas, the Bison took the early lead in the third set. Once again, Georgetown attempted a comeback run, scoring 4 straight points to narrow Howard’s lead to just 5. But as had been the pattern for the Hoyas, they fell to the Bison’s powerful offense, losing in three sets despite 9 kills from Goyena and 9 assists from senior setter Emma Plutnicki.

Although the team is beginning its season with 3 losses, Head Coach David Heller told Georgetown Athletics he was proud of the team’s effort and looks forward to getting to work for the rest of the season.

“There is a lot of learning we can do to prepare for next weekend,” Heller told Georgetown Athletics following the matches. “It’s really exciting to see the team continue to improve from match to match on our serving aggression and out of system attacking.”