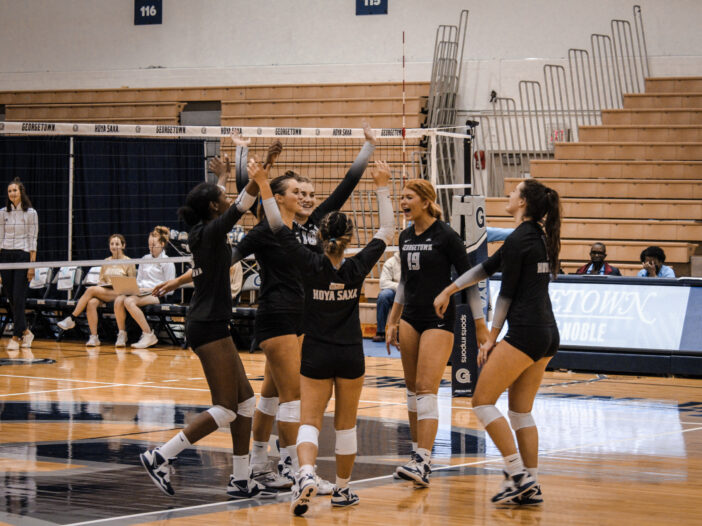 Sophomore outside hitter Mary Grace Goyena turned in multiple exceptional performances as Georgetown women’s volleyball earned its first two wins of the season at the Dig the District Invitational on Sept. 9-10.

On Sept. 9, after almost three hours of volleyball and an exhausting four-and-a-half sets, the air in McDonough Arena started to feel electric. It felt like something that the Hoyas (2-7) and their fans had not experienced yet this season. Fans stood up and began to cheer as they sensed this buzz surrounding the court — the Hoyas were on the verge of capturing their first win.

Sure enough, Goyena sealed the deal just moments later for the Hoyas with a crushing final kill to top off her career-high 29 kills, ending the fifth set, 15-13, and taking the game, 3-2, against the Binghamton Bearcats (6-2).

The team rushed on to the court to celebrate and rejoiced in the long-awaited relief.

Goyena spoke to the team’s emotions behind getting its first win.

“We’ve been waiting for this for so long,” Goyena told The Hoya in a post-game interview. “We’ve been putting in so much work and getting so close that it feels great to finally have it and be able to share this with one another.”

But the winning didn’t stop there. The Hoyas charged on the next day, Sept. 10, to not just win, but dominate, against local rival George Washington University (3-6), topping the Colonials, 3-0, and leaving the Dig the District Tournament with a 2-1 record.

Goyena starred once again with a match-high 11 kills, with sophomore right side Minnie Purcell chipping in 10 of her own.

The Hoyas opened up tournament play on the afternoon of Sept. 9, facing the Rider University Broncs (2-5).

After a strong start, blowing by the Broncs to grab the first set, 25-14, the Hoyas lost momentum and were unable to stop the Rider comeback. Despite Goyena’s offensive leadership with 16 kills and an impressive defensive showing from junior middle blocker Chanelle Smith, who managed 8 blocks, the Hoyas dropped three sets in a row (25-18, 25-21, 25-15).

The Hoyas’ doubleheader continued just a few hours later as they faced off against Binghamton the evening of Sept. 9. Although the Bearcats came out of the gates with high energy, taking the first set easily, 25-16, the game was far from over.

The next three sets saw intense battles between the two teams, with 14 tie scores in both the second and third set and 9 tie scores in the fourth set. However, the Hoyas held their own on the offensive end, as junior right side Ruth Kayongo and graduate middle blocker Brennan Wilhite chipped in 11 and 8 kills, respectively, to complement Goyena’s standout performance. On defense, the team kept the ball off the ground with 80 digs, led by sophomore libero Karis Park, who charted 24 digs of her own.

With this relentless, team-first energy, the Hoyas were able to stay toe-to-toe with the Bearcats and claim the second and fourth sets, 25-22 and 25-23, respectively, which geared them up for their final victory at the end of five sets.

Head Coach David Heller said he was proud of the team’s ability to stick together in competitive situations.

“We’ve had a lot of injuries that have plagued us early this season, but so many players stepped up this weekend,” Heller said in a post-game interview with The Hoya.“Mary Grace has been a big point scorer for us but Ruth Kayongo, Minnie Purcell and Brennan Wilhite all helped contribute offensively too. It was a great team win.”

The Hoyas closed out the tournament with a win Sept. 10 against George Washington, sweeping the Colonials in three straight sets, 25-19, 25-20, and 25-16, respectively.

The team came out with high energy after the previous night’s victory, with sophomore setter Lilly Costigan pitching in 31 assists ahead of a cross-country trip to California to face UC Santa Barbara (2-6) in a doubleheader on Sept. 16-17.

Heller said she is optimistic about the outlook for the team’s season.

“I think that this first win was the big hump we needed to get over, and now they know they can do it and play at a high level of volleyball,” Heller said.