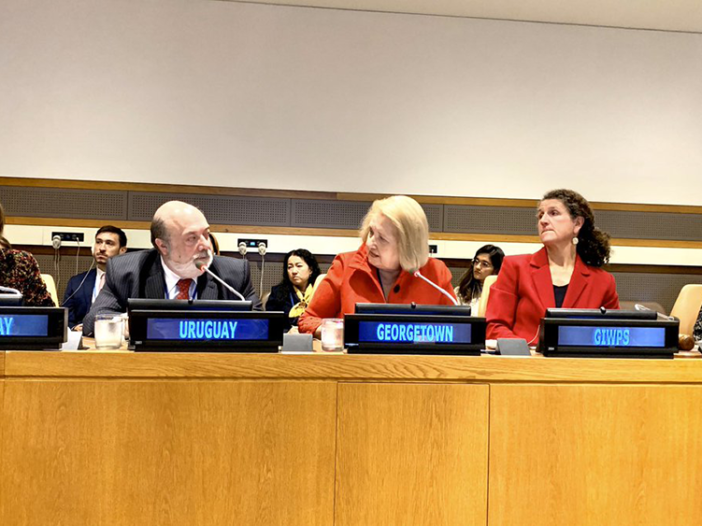 Nearly 60 countries have significantly advanced the wellbeing of women in recent years, according to the 2019 Women, Peace, and Security Index released by Georgetown University’s Institute for Women, Peace and Security on Oct. 22.

GIWPS, which was launched in 2011 by former U.S. Secretary of State Hillary Clinton and University President John J. DeGioia (CAS ’79, GRD ’95), examines the roles of women in fostering peace and security and growing economies around the world. The 2019 WPS Index compares women’s inclusion, access to justice and security in 167 countries.

The index evaluates countries on 11 indicators of women’s wellbeing and empowerment, including average years of education, financial inclusion, employment and parliamentary representation. Each country is given a numerical score for each subindex and geometric means are used to aggregate the subindex scores into the WPS Index.

This year’s study saw Norway surpass Iceland in ranking the best for women in the second edition of the index, while Yemen is ranked the lowest. The United States moved up from 22nd to 19th place in the rankings.

Women’s empowerment globally is heading in a positive direction, according to Jeni Klugman, managing director of GIWPS and lead author of the index.

“This is good news for everyone, as the world is more secure, peaceful, and prosperous when women are accorded full and equal rights and opportunities,” Klugman wrote in a GIWPS press release.

Notable improvements for women worldwide include greater access to financial services and education and legal reforms, according to the report. However, progress towards women’s economic participation is still slow. Around the world, 2.7 billion women remain legally restricted from working in the same jobs as men.

The most valuable takeaway from the index is that countries should continue to strive towards bettering the lives of women, as the practice benefits society as a whole, according to Lead Student Research Assistant Elena Ortiz (SFS ’21).

“Data analysis finds that higher (better) WPS scores are correlated with lower rates of current intimate partner violence, political violence against women, and infant and maternal mortality rates,” Ortiz wrote in an email to The Hoya. “These findings in particular underline the importance of multidimensionally measuring women’s wellbeing while reinforcing that when women are doing better, society as a whole does better.”

The index was developed in collaboration with the Peace Research Institute of Oslo, an independent peace and conflict studies research institution, and was funded by the Norwegian Ministry of Foreign Affairs. The partnership between GIWPS and PRIO began in 2016, before the first index was released in 2017.

The 2019 index was presented by representatives from GIWPS on Oct. 22 at the United Nations Headquarters. Before its official release, certain key findings were featured in National Geographic magazine.

Ortiz wrote that she is glad that the index has garnered attention from these major institutions.

“Being part of a project reaching heights such as National Geographic and the UN feels surreal,” Ortiz wrote. “When I first started working at GIWPS at the start of the summer, I had no idea that the Index would be featured in their publication, but I think it’s an extraordinary opportunity for the Index to reach a wider audience, ultimately amplifying the powerful impact I know it will have.”

The new index looks at women’s security on three levels, taking into consideration intimate partner violence, sense of security in the local community and organized violence. The WPS index differs from other existing indexes because it takes into account these security factors, according to Marianne Dahl, who led PRIO’s part of the project.

“If you want to capture how it is to be a woman in these countries, you can’t only focus on inclusion and justice,” Dahl said in an interview with PRIO. “Those are important, but if girls don’t feel safe as they walk home from school, if women are often sexually abused or experience violence in their partnerships, that affects their lives in profound ways.”

“I hope it can be a tool for advocates in enlightening policy-makers on the critical importance of women’s wellbeing for everyone in society,” Ortiz wrote. “Especially for countries that have stagnated or fallen in the rankings since 2017, I hope this year’s results put pressure on them to step up their game and prioritize gender equality at the top of their national agendas.”