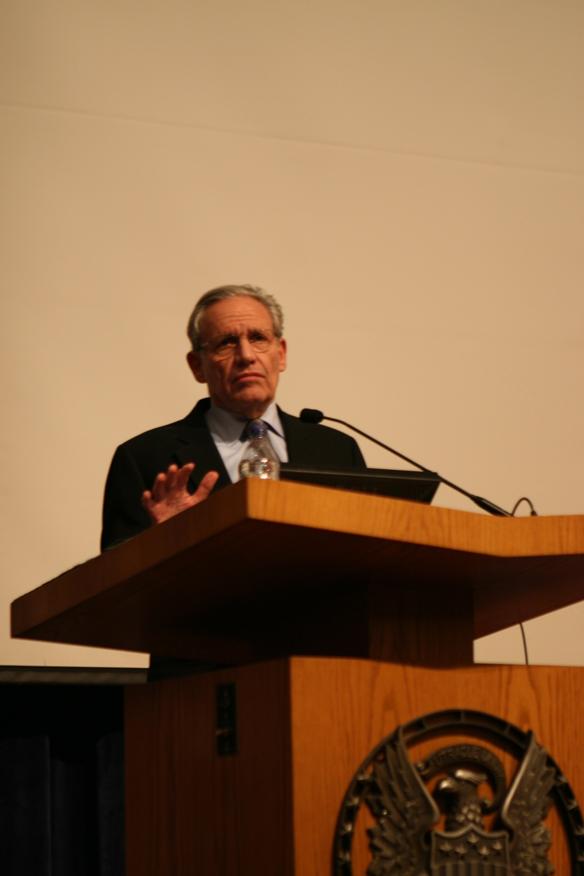 Speaking to a packed audience of future politicos, journalists and business-minded students, famed investigative reporter Bob Woodward highlighted the importance of constantly seeking the truth, the hallmark of his four-decade career.

“Democracies die in darkness,” Woodward said to a full audience in the Intercultural Center at the Mike Jurist Memorial Lecture, which commemorates Jurist (SFS ’07), a previous president of Lecture Fund who passed away shortly after graduating. Past speakers for the Jurist Lectures include veteran ABC news journalist George Stephanopoulos and Bush advisor Karl Rove.

An icon in investigative journalism, Woodward is best known for his work in exposing the Watergate Scandal. He emphasized the importance of open government and the pursuit of the truth, peppering his talk with anecdotes reflecting his intimate understanding of the eight presidents that he has covered.

“What will do us in is secret government, and that’s what Nixon tried,” he said.

“You see what is going on in Egypt,” Woodward added. “That is a rebellion against secret government.”

Woodward’s reporting on Watergate with fellow Washington Post reporter Carl Bernstein is often hailed as one of the greatest displays of investigative journalism. The two wrote a bestselling book, “All The President’s Men,” on their experience which was made into an Oscar-winning film of the same name.

Woodward has since penned 16 books including twelve No. 1 best sellers. He continues to work for The Washington Post as an associate editor, and his most recent book, “Obama’s Wars,” was published last September.

“I almost called [‘Obama’s Wars’] ‘The Divided Man,’ because [Obama] knows he has to lead, he signed up for this, he’s commander-in-chief, but at the same time he just does not like war,” Woodward said.

Woodward’s quest for exposing the truth has been a driving force behind his career, he said, but he knows that there are more secrets to uncover. Recalling a discussion he once had with Al Gore, Woodward said that Gore told him that the public knows only one percent of what went on during Clinton’s eight years in the oval office.

“I just died,” Woodward recalled. “It’s certainly something I live with every day … Do we really know what’s happening?”

At one point, Woodward asked audience members to name their biggest political fears, with answers ranging from climate change to political polarization.

“All of the things you’ve raised, and the other issues on the agendas, are real, but I think we’ll deal with them eventually,” Woodward said. “My answer on what to worry about is secret government.”