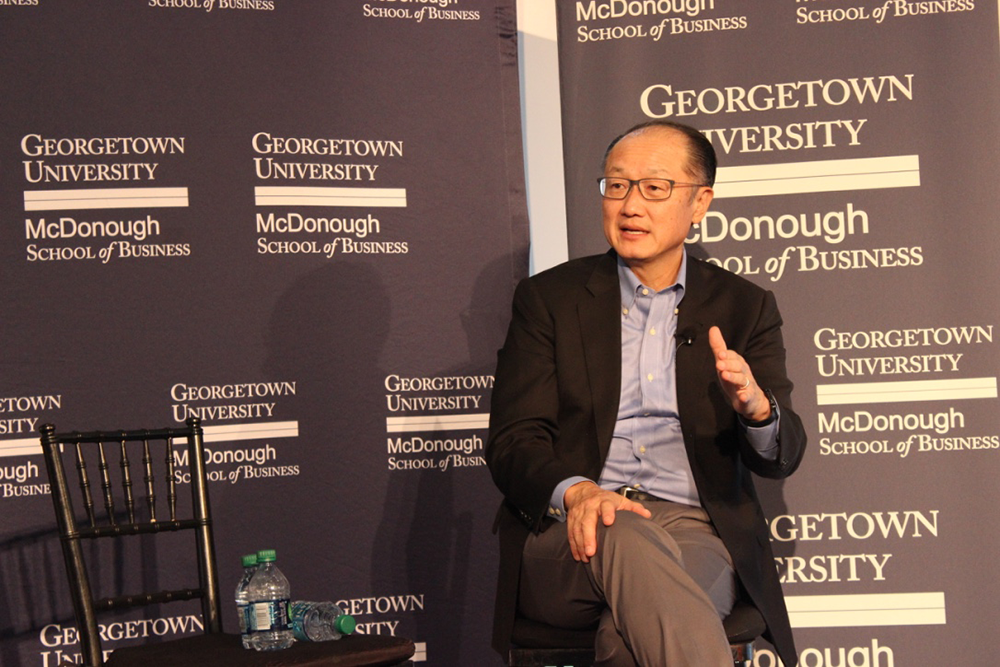 World Bank President Dr. Jim Yong Kim urged students to use their lives to advocate for the poor during the inaugural Asian Diversity Dialogue on Oct. 28.

Before he became president of the World Bank in 2012, Kim served as president of Dartmouth College after co-founding Partners in Health, a nonprofit organization that provides healthcare to the poor in developing countries.

Kim said one of the founding tenets of the organization was the idea of a “preferential option for the poor,” which calls on people and governments to prioritize the needs of the least well-off in society.

“We determined that we were just going to work in the poorest communities and try to provide healthcare, education and sometimes housing and livelihood, and we’re going to keep doing it, despite the fact that everyone in the world seems to be going against us,” Kim said.

Once an opponent of the World Bank, Kim said he learned he could still follow the guiding principles that led him into nonprofit work to enact positive change through his position in the World Bank.

“I had spent two decades prior in my career critiquing the World Bank,” Kim said. “I was actually a part of a group called ‘50 Years is Enough,’ which has the purpose of closing the World Bank.”

Kim said he understood little about finance until he became World Bank president. In his time in the position, Kim said he has learned that having a strong understanding of finance and economics is crucial to creating a real impact in developing nations.

“You cannot honestly talk about making a preferential option for the poor without understanding finance because if you don’t understand it, then almost surely, the poor will be gobbled up by the global market system,” Kim said.

“At this point, leaders and ministers of finance have to commit to investing in people,” Kim said. “There’s just no way that more charity is going to get us there.”

AASA Treasurer Feihan Xie (MSB ’20) said he and AASA Vice President Cindy Fan (SFS ’19) saw a need for a greater presence in leadership and management positions and came up with the idea for the dialogue to encourage AAPI representation in business.

“AAPI have good representation at the entry level job in the US, but only 1.5 percent of executives are AAPI. There is a clear gap between the technical skills and human skills for AAPI individuals,” Xie wrote in an email to The Hoya. “Cindy and I came up with this year of organizing a conference specifically targeting to the AAPI community here at Georgetown to discuss the importance of leadership and giving them exposure to different industries.”

The Georgetown University Student Association senate passed a resolution Oct. 22 in support of the event, saying AAPIs are an integral part of the Georgetown community.