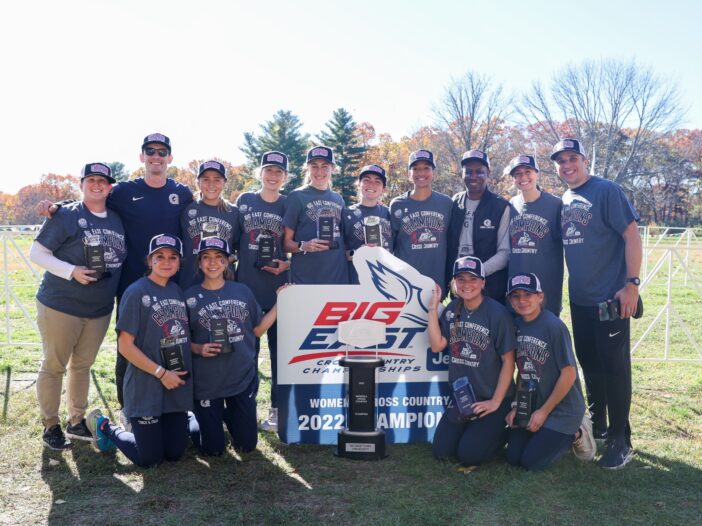 Another year, another crown for the Georgetown University women’s cross country team. In the Big East Cross Country Championships, the women’s team brought home its third straight title, while the men’s team placed third in team rankings and saw two Hoyas finish among the top ten.

Senior Maggie Donahue finished first on the squad and second overall with an average mile split of 5:24 and a time of 20:08 for the 6K race, trailing the first-place finisher by just two seconds. Graduate Grace Jensen followed Donahue in third place at the Oct. 29 race in Attleboro, Mass. The women’s team lived up to its expectations after going into the conference championship ranked No. 1 by the United States Track & Field and Cross Country Coaches Association’s Mid-Atlantic Regional Coaches’ Poll. The women who contributed to this phenomenal performance by the Hoyas surpassed runner-up Providence by a margin of 11 points, running seven seconds faster than the Friars on average. Third-place finishers Connecticut trailed by a gap of 60 points and ran 46 seconds slower on average.

This not only attests to the individual, exceptional talent of the five scoring Georgetown runners, but also the depth of the roster as a whole. Even though there were 95 total athletes competing from 11 different schools, no Hoya placed below 56th.

Cross Country and Track and Field Director Alton McKenzie said the leadership of upperclassmen on the team has contributed to the Hoyas’ success.

“We have some battle-tested athletes, a group of upperclassmen and veterans who have been here before, so it definitely speaks to the depth that we have,” McKenzie told The Hoya. “The last two years we had winner and runner-up in the 2020 championship, ’21 we had a winner, and ’22 we had a runner-up. We had leadership in the front that’s kind of kept the group together.”

Beyond individual excellence, McKenzie said the team won because of its dynamic teamwork.

“We have a lot of quality up front and we can run as a group, which makes us a pretty dangerous team,” McKenzie said. “It’s a group effort, not necessarily one person.”

“Honestly I think I would credit that to the coaching staff in just fully having trust in each individual athlete but also what we can accomplish as a team. I think they are the ones that we look towards to give guidance,” Donahue said.

The men’s 8K race followed the women’s race. All ten Hoyas finished within the top 48, and eight ran into the top 23 of 85 total competitors. The men’s squad collectively finished in third place with an average time of 24:03 and 68 total points.

Senior Parker Stokes led the Hoyas with a fourth-place finish, achieving a mile split of 4:45. Senior Sean Laidlaw was not far behind, finishing in ninth place with a pace of 4:47.

A crowd of Hoyas finished between 17th and 23rd. Senior Camden Gilmore, who ran a 24:17, was tightly followed by sophomore Lucas Guerra, who ran a 24:18. Four Georgetown runners claimed places 20-23, all crossing the finish line almost concurrently.

McKenzie said the upperclassmen on the men’s team have brought experience that adds to the squad’s depth.

“The sophomores gained some experience from the past few races, and then we do have two upperclassmen who went through the experience of going to an NCAA championship, so we’re hoping that they can kind of influence the younger group,” McKenzie said.

The men’s and women’s teams seek to continue their momentum at the NCAA East Regional Championships.