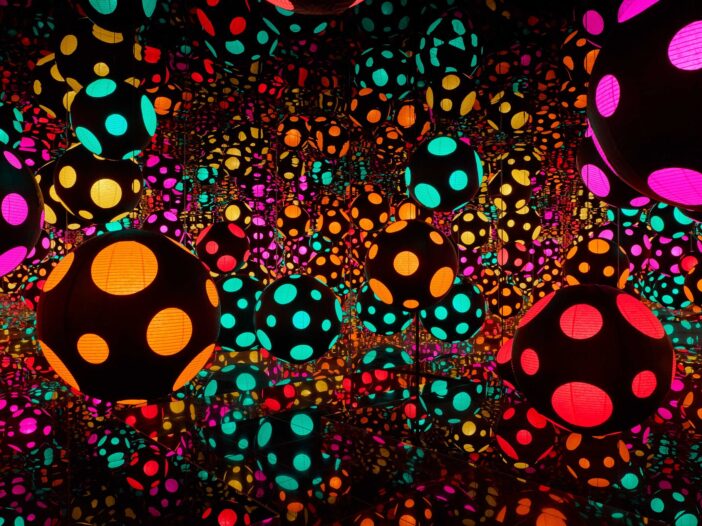 Japanese artist Yayoi Kusama’s exhibit “One with Eternity” debuted at the Hirshhorn Museum in Washington, D.C., following a two-year delay due to the COVID-19 pandemic.

The exhibit contains five artworks, including two of Kusama’s Infinity Mirror rooms, Kusama’s signature immersive multimedia installations. A major attraction of the exhibit is Kusama’s “My Heart is Dancing into the Universe” mirrored room, which contains giant polka-dotted balls in vibrant colors. Kusama — who has worked in the art world for nearly 70 years — is known for her use of vibrant colors and symbolic imagery of unity. The Hirshhorn has collected work from Kusama since 1996.

Daisy O’Brien (COL ’24), who visited the exhibit soon after it opened, said that the aesthetic of the art draws in all viewers, even those who are not typically excited about museums.

“I would say this isn’t the stereotypical museum exhibit that opens up all around D.C. This one stands out from the rest,” O’Brien said. “I’m not really into artwork myself, but this exhibit really was fun to go to. It almost seemed like it was made to be posted on Instagram.”

In addition to the Infinity Mirror rooms, the exhibit features paintings, sculptures and photographs from Kusama. The exhibit, which opened April 1, will be on display at the Hirshhorn through Nov. 27.

Hirshhorn Director Melissa Chiu said the exhibit will feature new artworks of Kusama’s that the museum just acquired in January.

“This highly anticipated exhibition allows us to show the impact of Kusama’s radical practice and welcome three significant works into the permanent collection,” Chiu said in a press release. “‘One with Eternity: Yayoi Kusama in the Hirshhorn Collection’ demonstrates that Kusama’s legacy extends far beyond a single body of work.”

Riya Dave, a student at George Washington University who also visited the exhibit, said Kusama’s artwork has a calming effect for viewers.

“I really didn’t know what to expect coming in and tried to keep my expectations low,” Dave told The Hoya. “When I walked in, it kinda mesmerized me and almost slowed my thoughts if that makes sense. I feel like in college you get so wrapped up in searching for a job or focusing on the next assignment, but the repetition of dots just helped calm those thoughts in the back of my head.”

The exhibit follows a 2017 exhibit at the Hirshhorn, “Yayoi Kusama: Infinity Mirrors.” This collection drew in 475,000 visitors, and marked the museum’s highest spring viewership in its history. The Hirshhorn’s 2017 Kusama exhibit rose to popularity after it blew up on social media with the exhibition hashtag #InfiniteKusama reaching over 172 million users on Twitter and Instagram. During the 2017 Kusama exhibit at the Hirshhorn, the museum received almost 58,000 pre-reserved ticket requests in the first minute of registration.

Because of the popularity of Kusama’s previous exhibition in 2017, the Smithsonian expects similar record-breaking attendance numbers at the museum over the next several months.

To purchase tickets, visitors must wait in line beginning at 9:30 a.m. to receive same-day passes, which are distributed on a first-come, first-served basis.

O’Brien said the popularity of this year’s exhibit makes it difficult to fully enjoy the artwork.

“It was something I would definitely recommend,” O’Brien told The Hoya. “However, the line was sort of long, and I felt as if the museum could have had a better system because most people can’t dedicate the majority of their day to one exhibit.”

O’Brien said that the aesthetic of the exhibit draws in all viewers, even those who are not usually into art museums.

“I would say this isn’t the stereotypical museum exhibit that opens up all around D.C, this one stands out from the rest,” O’Brien said. “I’m not really into artwork myself but this exhibit really was fun to go to. It almost seemed like it was made to be posted on Instagram.”

“I thought it was cool how she incorporated polka dots throughout most of her work, and how you were immersed in the work rather than just staring at the typical painting on the wall,” Dave said.